Do you know how many open-source tools are in DevOps?

Have you ever seen the picture below?

Have you ever felt lost in the DevOps world with seemingly more than 1000 different tools?

If you are struggling with these questions now, then today you are in luck because I’m here to help you figure out the most popular DevOps tools. 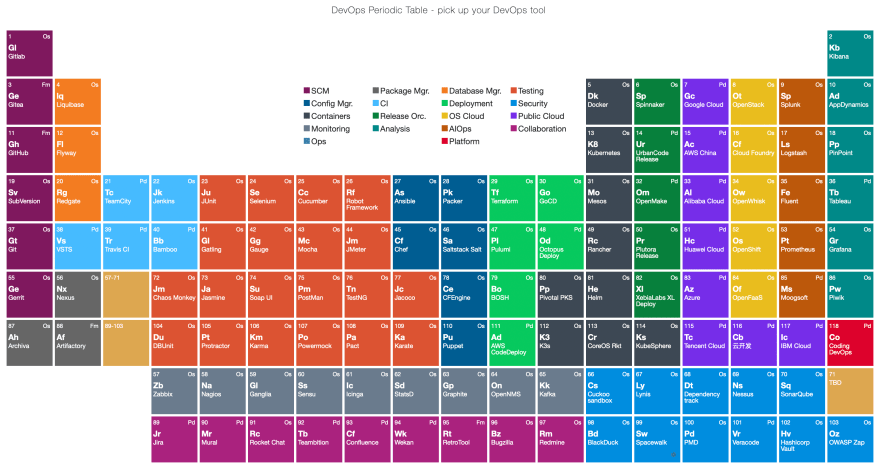 This's a controversial topic, and I'm not gonna go into it in this post. I'd like to give you an equation here only:

And today I just want to introduce you to some popular tools.

If you are a Chinese reader, I can give you an article that I wrote some months ago which is named:

There are 2 major editions of GitLab:

Before I introduce you to GitLab, I'd like to talk a little bit about Git.
Git is a free and open-source distributed version control system designed to handle everything from small to very large projects with speed and efficiency.
Version control provides developers with a means by which they can keep track of all the changes and updates in their codes.
With Git, you must have thought that we need a "Git server". As an alternative to GitHub, if you want to deploy the "Git server" privately, GitLab CE might be a good choice.

GitLab has been used by more than 100,000 organizations, and it's the most popular solution to manage Git repositories on-premises.

Jenkins is one of the best open-source continuous integration and automation server due to the over 1,800 plugins to support creating, delivering, and automating any project.

Using Jenkins to automate your development workflow will help you to focus on the work that matter most.
Jenkins is commonly used for:

You can execute repetitive tasks, save time, and optimize your development process with Jenkins.

Argo CD is a declarative, continuous delivery tool for Kubernetes, which uses the principle of GitOps.
GitOps is a principle of using Git as the "single source of truth" for application deployment information.
It ensures that the state of a deployment is the same as the state which is defined in the Git repository.

Why should you use Argo CD？

Tekton is a powerful yet flexible Kubernetes-native open-source framework for creating CI/CD systems.
It's open-source and part of the CD Foundation, a Linux Foundation project.

The main project with Tekton is Tekton Pipelines. It provides k8s-style resources for declaring CI/CD-style pipelines.
The Tekton Pipelines are cloud-native and decoupled:

While Ansible leverages IaC, it uses SSH for its push nodes, so it's agentless.
Ansible is very easy to use for its Playbooks are written in YAML that is readable by humans.

The Design Principles of Ansible are:

In a nutshell, Ansible is one of the most simple yet effective IT orchestration and configuration management tools.

Maybe you are already using Docker and Kubernetes, which are the basis of containerization.
After that, you will need a mechanism to manage the Kubernetes resources. Yes, helm can help you to achieve this.

Helm is a tool that streamlines installing and managing Kubernetes applications. Think of it like apt/yum/homebrew for Kubernetes.

You can use Helm to:

In addition, Helm is a CNCF graduated project.

Harbor is an open-source trusted cloud native registry project that stores, signs, and scans content.
Harbor extends the open-source Docker Distribution by adding the functionalities usually required by users such as security, identity and management.
Having a registry closer to the build-and-run environment can improve image transfer efficiency.
Harbor supports the replication of images between registries and also offers advanced security features such as user management, access control and activity auditing.

The 8 main features of Harbor:

Helm is a CNCF graduated project too.

SonarQube empowers developers to write cleaner and safer code.
It can catch tricky bugs to prevent undefined behavior from impacting end-users and make sure your codebase is clean and maintainable, to increase developer velocity.

You can integrate Sonarqube scanning into the Jenkins/Tekton Pipeline to catch code issues as they occur in the CI process.

Prometheus is the second graduated project of CNCF. It is a systems and service monitoring system.
It collects metrics from configured targets at given intervals, evaluates rule expressions, displays the results,
and can trigger alerts when specified conditions are observed.

The features that distinguish Prometheus from other metrics and monitoring systems are:

We've gone through 9 DevOps tools, and maybe at this moment you are thinking that DevOps tools are too much and these make you feel overwhelmed.
Maybe you wish you could have an open-source tool to help you manage those DevOps tools. You choose the best DevOps tools that you love,
then one tool could take care of the rest. Ok, DevStream do is it.

DevStream is a DevOps toolchain manager. It can help you to kick off DevOps quickly and easily.

With DevStream, you can define your desired DevOps tools in a single human-readable YAML config file, and at the press of a button (one single command),
you will have your whole DevOps toolchain and SDLC workflow set up.

At the last, I have to tell you some more bit about the DevOps tools I mentioned above. They are the top 10 tools just in my mind.
If you have a different "top 10" idea, that's fine.
I also welcome you to post your "top 10" in the comment section below.

You should use the OpenSSF Scorecard

All about Open Source

Once suspended, danielhu will not be able to comment or publish posts until their suspension is removed.

Once unsuspended, danielhu will be able to comment and publish posts again.

Once unpublished, all posts by danielhu will become hidden and only accessible to themselves.

If danielhu is not suspended, they can still re-publish their posts from their dashboard.

Once unpublished, this post will become invisible to the public and only accessible to Daniel Hu.

Thanks for keeping DEV Community 👩‍💻👨‍💻 safe. Here is what you can do to flag danielhu:

Unflagging danielhu will restore default visibility to their posts.