The number of production dapps continues to explode and the demand for developers building with Solidity and other blockchain languages continues to outpace supply, moving wages higher and higher.

As a developer getting into this space, I quickly learned there are a lot of differences in the way that we interact with and build on top of blockchains versus what I was used to in the traditional web. With Ethereum (and other blockchains), data isn’t stored in a format that can efficiently or easily be consumed directly from other applications or front ends. The problem is that you need to have the data indexed and organized for efficient retrieval.

Traditionally, that’s the work that databases do in the centralized tech stack, but that indexing layer was missing in the Web3 stack.

In the traditional web stack, databases, servers, and APIs query, filter, sort, paginate, group, and join data before it is returned to an application usually via some type of http request. These types of data transformations are not possible when reading data directly from Ethereum or other blockchains.

In the past, developers were getting around this by building their own centralized indexing servers - pulling data from blockchains, storing it in a database, and exposing it over an API. This required significant engineering and hardware resources and broke the important security properties required for decentralization.

How can we build an API on top of blockchain data that can easily be deployed to a decentralized web infrastructure? Let's find out.

The vision of and movement towards a decentralized internet is commonly referred to as Web3. Web3 enhances the internet as we know it today with these added characteristics:

For a great overview of what Web3 is, check out this video by Juan Benet

To achieve decentralization, protocols define networks that offer a range of digital services such as compute, storage, bandwidth, identity, and other pieces of web infrastructure with no intermediaries. These protocols are usually distributed across multiple nodes (servers) that enable the participation of anyone looking to be part of the network and provide the service.

The network participants are incentivized to provide the highest quality services to anyone consuming them. Rules are also put in place to ensure the security and the integrity of the network itself. This is usually accomplished using a combination of consensus mechanisms programmed into smart contracts implementing various types of game theory and cryptoeconomic design.

What makes a service truly decentralized?

Building on The Graph

In this post, we will be looking at one such protocol, The Graph, and how to build and deploy our own GraphQL API using data stored in the Ethereum blockchain.

The Graph is an indexing protocol for querying blockchains like Ethereum and networks like IPFS. Anyone can build and publish open APIs, called subgraphs, making data easily accessible.

Subgraphs define the data, data sources, and data access patterns that you would like to have made available via a GraphQL API. You as a developer can choose either to use a subgraph already deployed by another developer, or define and deploy your own subgraph and use it.

Developers can create open APIs by deploying their subgraphs either to the hosted service or to the network, enabling them to earn money based on the amount of usage of their API.

Subgraphs are made up of a few main parts:

The GraphQL Schema defines the data types / entities you would like to save and query for. You can also define configuration like relationships and full text search capabilities in your schema.

(from the docs) The manifest defines the smart contracts your subgraph indexes, their ABIs, which events from these contracts to pay attention to, and how to map event data to entities that Graph Node stores and allows to query.

AssemblyScript Mappings allow you to save data to be indexed using the entity types defined in your schema. The Graph CLI also generates AssemblyScript types using a combination of the subgraph's schema along with a smart contract's ABIs.

Now that we have a good understanding of The Graph and how it works, let's start writing some code.

In this tutorial we'll build a subgraph for querying NTF data from the Zora smart contract, implementing queries for fetching NFTs as well as their owners, and building relationships between them.

To be successful in this tutorial, you should have Node.js installed on your machine. These days, I recommend using either nvm or fnm to manage Node.js versions.

Next, go to the dashboard and click on Add Subgraph to create a new subgraph.

Configure your subgraph with the following properties:

Next, install the Graph CLI:

There are two ways to initialize a new subgraph:

1 - From an example subgraph

2 - From an existing smart contract

If you already have a smart contract deployed to Ethereum mainnet or one of the testnets, initializing a new subgraph from this contract is an easy way to get up and running.

This command will generate a basic subgraph based off of the contract address passed in as the argument to --from-contract. By using this contract address, the CLI will initialize a few things in your project to get you started (including fetching the abis and saving them in the abis directory).

By passing in --index-events the CLI will automatically populate some code for us both in schema.graphql as well as src/mapping.ts based on the events emitted from the contract.

The main configuration and definition for the subgraph lives in the subgraph.yaml file. The subgraph codebase consists of a few files:

The entries in subgraph.yaml that we will be working with are:

With The Graph, you define entity types in schema.graphql, and Graph Node will generate top level fields for querying single instances and collections of that entity type. Each type that should be an entity is required to be annotated with an @entity directive.

The entities / data we will be indexing are the Token and User. This way we can index the Tokens created by the users as well as the users themselves.

To do this, update schema.graphql with the following code:

On Relationships via @derivedFrom (from the docs):

Reverse lookups can be defined on an entity through the @derivedFrom field. This creates a virtual field on the entity that may be queried but cannot be set manually through the mappings API. Rather, it is derived from the relationship defined on the other entity. For such relationships, it rarely makes sense to store both sides of the relationship, and both indexing and query performance will be better when only one side is stored and the other is derived.

Now that we have created the GraphQL schema for our app, we can generate the entities locally to start using in the mappings created by the CLI:

In order to make working smart contracts, events and entities easy and type-safe, the Graph CLI generates AssemblyScript types from a combination of the subgraph's GraphQL schema and the contract ABIs included in the data sources.

Updating the subgraph with the entities and mappings

Now we can configure the subgraph.yaml to use the entities that we have just created and configure their mappings.

To do so, first update the dataSources.mapping.entities field with the User and Token entities:

Next, update the dataSources.mapping.eventHandlers to include only the following two event handlers:

Finally, update the configuration to add the startBlock:

Next, open src/mappings.ts to write the mappings that we defined in our subgraph subgraph eventHandlers.

Update the file with the following code:

Next, let's run a build to make sure that everything is configured properly. To do so, run the build command:

If the build is successful, you should see a new build folder generated in your root directory.

To deploy, we can run the deploy command using the Graph CLI. To deploy, you will first need to copy the Access token for the subgraph you created in the Graph Explorer:

Next, run the following command:

Once the subgraph is deployed, you should see it show up in your dashboard: 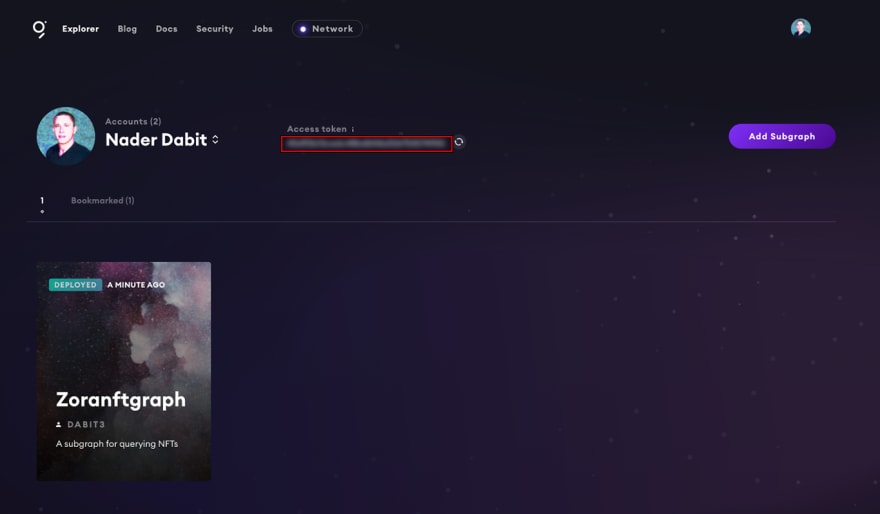 When you click on the subgraph, it should open the Graph explorer: 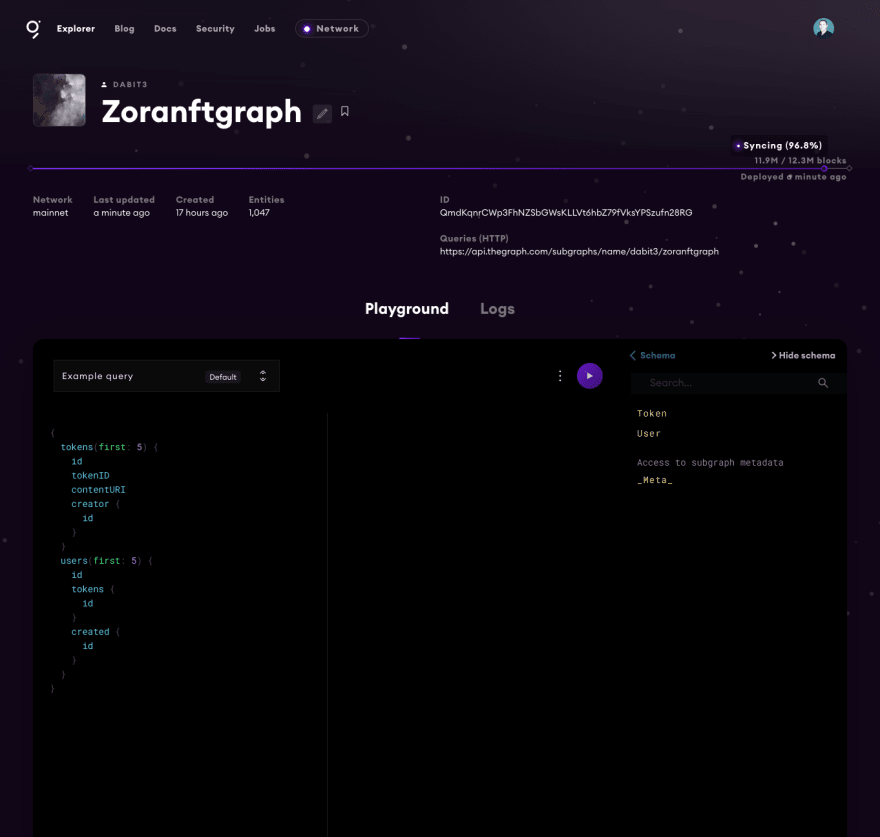 Now that we are in the dashboard, we should be able to start querying for data. Run the following query to get a list of tokens and their metadata:

We can also configure the order direction:

Or choose to skip forward a certain number of results to implement some basic pagination:

What if we want to make some changes to the subgraph and then redeploy? This is pretty easy, so let's learn how to do it.

To do so, we need to first add a new createdAtTimestamp field to the Token entity:

Now we can re-run the codegen:

Next, we need to update the mapping to save this new field:

Now we can re-deploy the subgraph:

Once the subgraph has been redeployed, we can now query by timestamp to view the most recently created NFTS:

The codebase for this project is located here

If you are interested in learning more about Web3, building Dapps, or building subgraphs, check out the following resources:

The 10 Most Popular PHP Frameworks and Their Creators

How to make an RSS feed in SvelteKit

Nader Dabit
Web and mobile developer specializing in cross-platform, cloud-enabled, and Web3 application development.
How to Get Into Ethereum | Crypto | Web3 as a Developer
#webdev #programming #blockchain #cryptocurrency
Building a GraphQL API on AWS with Amazon Neptune Graph Database and CDK
#graphql #webdev #aws #fullstack
Turning the Cloud Inside Out
#graphql #cloud #serverless #webdev
Forem Open with the Forem app