Wait, what? You want me to scream on purpose? Yes. And I promise this won’t lead to the Human Resources department knocking down your door. In fact, it might even help prevent negative interactions with your peers.

Try the following surprising advice to get truly calm.

Go out to your car and SCREAM.

Sometimes you have a bad interaction at work and it simply makes you furious. The logic center of your brain knows that it’s uncouth to be angry, but let’s be honest… logic has nothing to do with anger. After all we are scientifically classified as animals. Even software engineers like me, who operate in logic all day, can’t escape the feelings that arise when a coworker is being cruel or if the computer just isn’t behaving.

Of course we all hope that we can fight off our anger, but Buddhism has a surprising suggestion: don’t fight your anger. Famed Buddhist teacher Thich Nhat Hanh perfectly describes how you can accept and forgive the anger as a way of dissipating it:

“The practitioner knows that her anger is not her enemy; her anger is her suffering baby. She must take good care of her baby, using the energy of mindfulness to embrace her anger in the most tender way. She can say, “Breathing in, I know that anger is in me. Breathing out, I am peacefully holding my anger.”

One of the easiest ways to get through anger that may pop up is to go outside or to go someplace you’re comfortable with and just yell. It doesn’t have to be loud or to sound like William Shatner’s Kahn yell… but it’s just the act of acknowledging your anger. 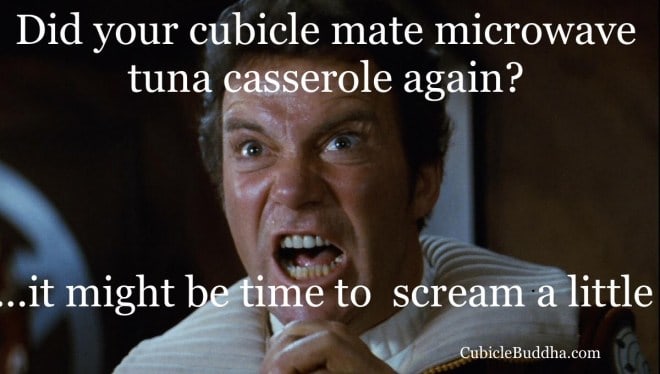 And once you’ve given yourself permission to feel your anger, you will most likely feel it dissipate.

“People who use venting techniques like hitting a pillow or shouting are actually rehearsing anger. When someone is angry and vents their anger by hitting a pillow, they are learning a dangerous habit. They are training in aggression. Instead, our approach is to generate the energy of mindfulness and embrace anger every time it manifests.”

So the trick is to not act out in a way that masks your frustration, but to really embody the pain. When you are screaming in your car, allow yourself to feel the catharsis that comes with actually expressing your emotions.

Once you stop judging your anger, it begins to feel less important to direct that anger at another person. In fact, you might find that you were in the wrong. Apologizing is not something to be ashamed of and can be very cathartic, and we have advice on how to apologize well. Or, you might find the clarity of mind to transparently share your concerns with your peer. Or perhaps it was something very silly to be mad at. Maybe you will find yourself laughing with your new friend.

Mindfulness is like a big brother who does not suppress his younger brother’s suffering. He simply says, “Dear brother, I’m here for you.”

So what do you think… could you see yourself walking out to the car to scream a little? What have you tried that’s helped to authentically embrace your feelings?

Boost your programming with ChatGPT3

How to Negotiate Your Job Offer

Cubicle Buddha
TypeScript nut + head writer at CubicleBuddha.com (other loves are cats, my wife, comic books, and VGs)
Are Timed Coding Interviews A Good Indicator Of Job Performance?
#programming #webdev #discuss #career
What’s your favorite piece of code that you had to throw away?
#agile #discuss #productivity #webdev
Screwing up. Advice on forgiving your inner child.
#productivity #agile #programming #webdev