Ever been here before...?

I know I have had to toss some of my favorite things I’ve written. And I’ve written about how change can be okay and might even be the best thing for the user. 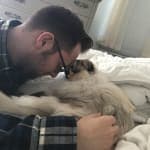 But... sometimes you need to mourn something before you can really move on. So tell me about your favorite bit of code that you’ve had to throw away. We can mourn it together so you can move onto even greater software!

TypeScript nut + head writer at CubicleBuddha.com (other loves are cats, my wife, comic books, and VGs)