Ever feel like you have to finish the whole project before releasing it?

By mining an unlikely source, I will show you why these “all or nothing” thoughts are hindering your success. We can observe Charles Dickens’ release process and prove how iterative releases allowed for quick learning and better results for the user.

If you want to get product out quickly that resonates, there are a few sure fire ways to delight the customer. As it turns out, Charles Dickens was practicing all of the following processes that Agile software development recommends:

I was always a big fan of his work (especially A Christmas Carol and Great Expectations), but I only recently took the time to read about the man. I was awestruck when I learned about how this Victorian-era author released his work in such an entrepreneurial fashion.

In today’s on-demand entertainment culture, users expect content to come out frequently. Musicians have stopped releasing albums that take years to make and are focusing more on releasing singles that can keep consumers attention more often. Software is the same in that video games are expected to have frequent bug-fixes, enhancements, and even new content that will pop up soon after a game’s release.

So imagine my surprise to discover that literature had a similar expectation back in the Victorian era. The book manufacturing and publishing process was not as advanced, and one natural outcome was a type of book release where a novel would be produced serially in sections or pieces. It’s said that no author capitalized on this serial novel medium to such an impressive degree as Charles Dickens. 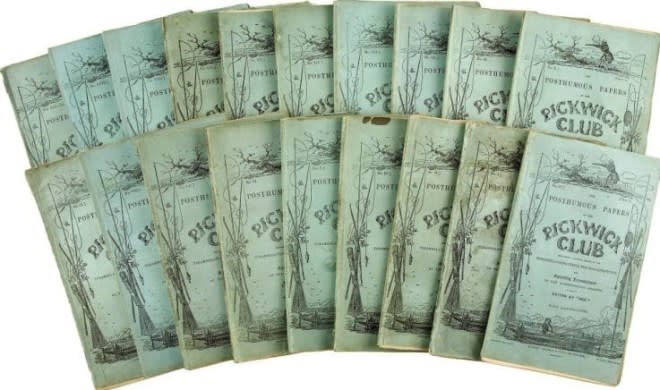 As we’ll discuss, his monthly releases created a riveted audience but also opened up possibilities for him to learn and implement his learnings. Sounds like Agile software to me!

One journalist remarks how Charles Dickens analyzed the market after poor sales of his first couple issues of The Pickwick Papers and determined that subsequent issues would need a character that better resembled his audience. His ability to analyze his sales numbers and listen to his customers resembles what we should all be doing with our products. For Charles Dickens, the decision to listen paid dividends and created a monstrously successful career.

Even in his later years, Dickens would stay connected to his audiences by going on various book reading tours that also were extremely lucrative.

While I’m amazed at the value and money that Charles Dickens gained from releasing frequently, I’m perhaps more impressed by his ability to learn from his mistakes. When someone told him that one disabled character’s description was problematic, he added more positive characterizations in the next issue of the serial novel.

I have certainly made many mistakes in my career. In fact, this blog is dedicated to showing how reflecting on one’s mistakes can make for a better product and (more importantly) a happier life. I’m enamored with the fact that Dickens was able to acknowledge his mistakes.

Charles Dickens certainly became wealthy due to his novels and book tours, but it’s often overlooked how impactful his writing was. I like making money as much as the next guy, but what really gets me up out of bed is the hope of improving people’s lives. As illustrated by the biopic The Man Who Created Christmas, Charles Dickens was extremely motivated to write A Christmas Carol so that he could promote charity. Despite being a unique story, the novel both sold well and caused a direct increase in charitable giving to the poor.

So is this where the comparison between serial novels and software development ends?

No. I believe that all careers have opportunities to make the world a better place. Yes, it’s clear that the arts have the potential to really touch people and change their hearts, but what I love about the following quote is that it emphasizes the daily impact of a life lived well:

“By living your life, by producing works of art, you contribute to the work of the collective awakening of our people.”

Any career that allows for introspection and iterative development provides an opportunity for making a large impact. In fact, there is a wonderful trend of companies seeking 401B or BCorp certification, where they can “use profits and growth as a means to a greater end: positive impact for their employees, communities, and the environment.” I believe that software companies are ideally positioned to have a strong impact due to the ability to release software iteratively (just like Dickens did with his serial novels) and thereby listen (via automated metrics) to the influence the product has on the world.

You might be wondering how you could personally implement all of the tips above. You might be feeling discouraged. Don’t be. There is always a chance to turn things around and to improve your life just like Dickens’ most popular character Ebenezer Scrooge discovers in A Christmas Carol. Sometimes you just need the help of friend, mentor, or the ”ghost of Christmas past.” CubicleBuddha.com strives to be that friendly ghost that wakes you up to what is truly important in life.

Regardless of if you work on a boring software application or some life changing product, you have users out there who deeply care about what you do. If you’re lucky enough to make a product like Dickens did that delighted users frequently, iterated to improve, and made the world a better place then surely you have chosen a wonderful career. And even if your occupation doesn’t allow for this kind of cyclical process, that doesn’t mean that you can’t improve yourself everyday. Remember, Dickens’ first two releases of The Pickwick Papers did not sell incredibly well, but failure lets us learn. Later releases turned Dickens into a household name. Take chances even in small decisions and don’t miss an opportunity to fail fast.

Come back each week to CubicleBuddha.com as we discuss how a career can be fulfilling and how we can better listen to ourselves and our users.

8 mistakes you must never make as a programmer

Top 8 Paid Open Source Programs To Apply To in 2023

Cubicle Buddha
TypeScript nut + head writer at CubicleBuddha.com (other loves are cats, my wife, comic books, and VGs)
Are Timed Coding Interviews A Good Indicator Of Job Performance?
#programming #webdev #discuss #career
What’s your favorite piece of code that you had to throw away?
#agile #discuss #productivity #webdev
What is the best quality a developer can have?
#discuss #webdev #programming #agile