tl;dr If you want to get started developing a new library for Q#, check out this template repo I made to get you going with the right structure, project files, and build automation with GitHub actions.

I have been really excited to start working on a new project with some colleagues building a new library for Q#, and wanted to share with you our journey so far!
The team will probably post more about the content of what the library is doing (implementing memory for a quantum computer), but here I want to focus on the infrastructure that we needed to get from an empty repo to a built and hosted NuGet package for a Q# library via GitHub Packages. 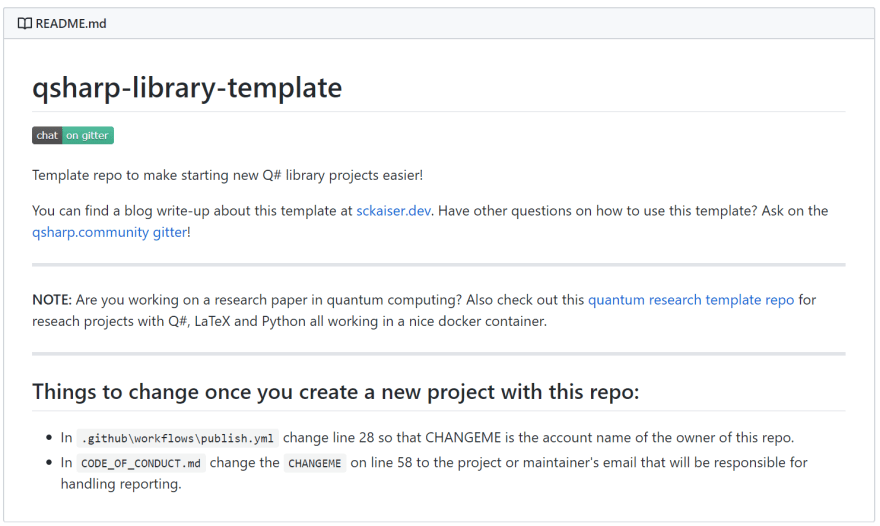 Libraries in general are a great way to extend languages without having to expand the base language thus increasing the maintenance and scope of the language.
Q# has a bunch of official libraries already provided already in the Microsoft/QuantumLibraries repo.
Part of our goal with this project is to show how leverage the existing Q# libraries and runtime and extend them to add new features and content.
This is certainly not a complete guide, and I'll highlight some improvements I plan to make in the future as we go!

This is probably a step that most of you can skip, but I wanted to add a few notes/reminders of things that are good to setup on a new git repo for a project like this.
Don't forget to:

Also for running Q# code you will want to install the QDK, or setup a Docker container to do your work in.

After looking at the microsoft/QuantumLibraries repo for a bit, I worked out how I wanted to structure the code in our repo.
There are three main directories that we needed, one for the source of the library, one for the samples demonstrating the library, and one for tests.
The samples directory will have a bunch of subdirectories (eventually) for each qRAM implementation we want to demo, as well as some samples showing how to do resource estimation for the various implementations.

You can make these folders/directories however you want, you will just need three folders in your base or root project folder called src, tests, and samples.

NOTE: There is nothing magical about these names, it just happens to be what my team and I decided so if you have other naming conventions, go ahead and change them!
Just make sure then as you are reading the rest of this post to make the right replacements for your names in the commands and files I show below 👍

Now that you have the folder structure, its time to create the Q# project files that will allow you and the later automation to build your library.
These project files are kinda like Makefiles and use the C# infrastructure (MsBuild) to actually control the Q# compilation.

Navigate to the src folder and run the following command:

This will create two files in the src/ directory: Library.qs and src.csproj.
You can see the contents below.

NOTE: You can change the namespace name to better reflect what your library is about!
The Q# API design documentation has some good guidance on how to make good namespace names, e.g.: Organization.Product.DomainArea.

You can see that the src.csproj file has a reference to the version of the QDK that it was created with as well as what .NET framework it is being built for.

You can test that this template was created correctly by running:

Generally you will not need to do much with the project files here in Q# other than to make sure to add references to other projects and packages you might take as dependencies for your project.
Speaking of, let's try that now by starting our tests project.

Navigate to the tests/ folder and run the following command:

This should create two new files in the tests/ directory, Tests.qs and tests.csproj

Now the project file here is almost good to go, but it needs to know about our library project in the src/ folder.
Let's add that now by running this command in the tests/ directory.

That should add the following <ItemGroup> to your tests.csproj file:

Now when you go to run the tests you write for your library the compiler knows where to find your actual library code!
You can test that this tests project is setup correctly by running dotnet test.

The last directory we need to setup is samples/.
Navigate back to the project root and into the samples/ folder.
Now, I plan to have multiple samples for my project so I'll make one more folder in samples/ called sample1.
Navigate into the sample1 folder and run the following command:

NOTE: You can change the namespace name to better reflect what your sample is about!

Again, you will want to run dotnet add reference to make sure the sample also knows about your library.

This will add the same ProjectReference to your sample1.csproj file.

You can check that this sample was created correctly by running the following:

Step 3: Setup the GitHub Actions to build and publish a package

Now that you have your repo structure setup, it's time to hook up the GitHub automation that will automatically do some maintenance on the repo.

We will setup two automation workflows for this repo, one that will make sure tests pass on code that is committed to master, and the other will build and publish a NuGet package when a new commit is made to master.

Both of these workflows are examples of GitHub Actions, learn more about this feature of GitHub repos here.

We can use yaml files to configure these workflows, and to make sure that GitHub finds these files let's make the following folders at the root of your project: .github/workflows/

In the workflows folder create a file called test.yml with the following contents.

This action will fire whenever you make a pull request on the master branch.
In the PR window you will see the feedback from the tests (passing/not passing).

You may want to modify this flow to fire on other branches or conditions, check out all the possible triggers for GitHub actions. 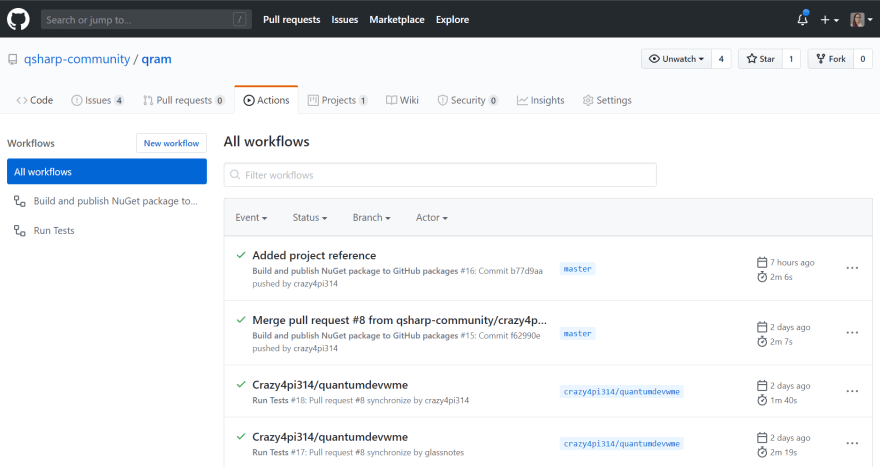 The above screen cap is from the qRAM library's actions page.
You can see the details of a particular action run here: 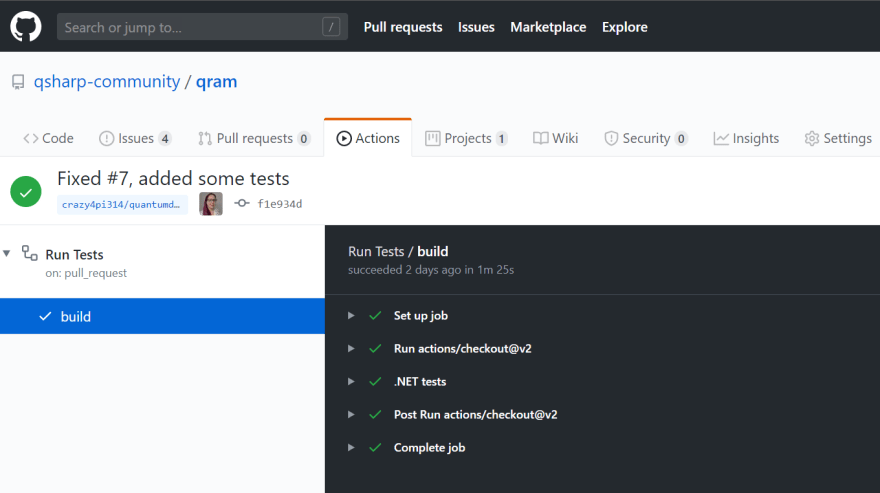 Now that you are sure your code is building and ready to merge it into master, let's take a look at the workflow that will package our library!

In the same workflows/ folder, create a file called publish.yml with the following contents:

The line you will have to change for your repo is the source-url: https://nuget.pkg.github.com/qsharp-community/index.json line.
Change the qsharp-community to the repo owner of the repo you are working in.
For more information on this configuration see the docs.

FIXME: So the numbering of the packages here is still not perfect, and is keyed off of the GITHUB_RUN_NUMBER of the action.
In order to be SemVer 2.0 compliant, it needs to start over when the minor or major version is incremented but I haven't figured out a good way to do this yet. 😆

Next steps: Templates and NuGet.org

So if you made it here and haven't made your repo yet, I saved you some time by making a template repo on GitHub.
I will keep it up to date while we continue with the qRAM project and when I figure out how to increment versions numbers better, I'll push the fix there too.
Also when the qRAM library is ready to go to version 1.0 and publish it on NuGet.org, I will add another workflow to the template repo to publish your library there too!

Hopefully you found this post helpful, and are ready to start making your own library for Q# today! 💖

So What is a GIL In Python ? Multiprocessing in Python.

A brief article on Browser Wars.

Once suspended, crazy4pi314 will not be able to comment or publish posts until their suspension is removed.

Once unsuspended, crazy4pi314 will be able to comment and publish posts again.

Once unpublished, all posts by crazy4pi314 will become hidden and only accessible to themselves.

If crazy4pi314 is not suspended, they can still re-publish their posts from their dashboard.

Once unpublished, this post will become invisible to the public and only accessible to Sarah Kasier.

Thanks for keeping DEV Community 👩‍💻👨‍💻 safe. Here is what you can do to flag crazy4pi314:

Unflagging crazy4pi314 will restore default visibility to their posts.