Below is an introduction to Helm! If you want to skip to the
cheatsheet, you can download it here.

According to its own docs, Helm is "the" package manager for Kubernetes. What does this mean?

It's a way of keeping track of all your Kubernetes stuff!

Helm as I describe it is a mechanism for packaging and parameterizing standard Kubernetes YAML files. It uses Go Templating for most of this mechanism, and adds a layer of version / metadata tracking as well. All of this packaged up into tarballs used by a client-side-only (as of helm v3) CLI.

Why use it? There are lots of alternatives out there, and many purported "Helm replacements," but Helm has yet to give up its throne, and I have not found anything better for my own use cases... yet. So what are Helm's strengths?

I will do my best not to wax poetic. I am biased and a big fan of Helm. As a layer of abstraction between an application and Kubernetes, I think it is a fantastic asset.

In particular, I think this is because:

As a system administrator, it is nice because it offers:

So that's what it is, and why it is desirable. But when is it useful?

I find that helm particularly shines in a handful of situations:

Occasionally a wrapper like ArgoCD, Flux, helmfile, or pulumi will be useful to manage your helm deployments too, so that you don't have to keep track of a bunch of CLI commands.

When not to use it?

Helm can definitely be overkill in some "hello world" or very simple deployment situations. Unfortunately, it also does not have a great answer for CRDs yet. Moreover, it is only useful for Kubernetes, so if you are unfamiliar with Kubernetes, it will have limited utility for you.

The other case where it may not be useful is in some internal applications. Maintaining a helm chart for an application can end up being a sizable amount of work, and they do not allow arbitrary inputs, so if you miss some key (i.e. "imagePullSecrets,") you can end up spending a lot of time key-chasing across your charts. I have heard of folks using Kustomize in such a situation, although another option is to use a meta chart (one chart for many apps) or Functions-as-a-Service (FaaS) framework like Serverless, OpenFaas, Knative, etc.

Also, helm charts do have a complexity ceiling. Go Templating provides lots of flexibility, but being DRY is hard, and there are many parts of the process that are not optimal from a software development point of view. As
charts become more complex, an operator becomes increasingly beneficial as a mechanism to provide better software semantics to the application management process. However, the learning curve for operators can also be a bit steep.

Finally, helm charts unfortunately do not have hard-and-fast standards about how values are used across the ecosystem. As a result, you will often encounter wild variations in chart quality, value naming, and value behavior.

For this example, we will use my generic chart, useful for deploying simple services with standard configuration or helm needs.

We are also going to use this hello-world container.

First, add the repository that houses our example chart:

You can look at the values available for the chart:

Then create a YAML file called my-values.yaml to hold values:

Then template the output:

And install it into the Kubernetes cluster!

Then you should be able to see the app deployed:

And view the service in your web browser at http://localhost:8080:

If you want to clean up after yourself:

Unfortunately, I have not taken much time to dive into troubleshooting here! If you are hitting issues, please shoot me an email - I would love to have feedback on what to improve! Maybe someday I will take the time to set up comments 😅

So now you have a "Hello World" deployment under your belt. However, it also helps to keep in mind some best practices as you keep improving. Below is a handful of helm chart conventions that may be unfamiliar if you are new to the community:

I took the time to arrange a "cheat sheet" of my favorite helm commands and the contexts in which they are useful. It was inspired by RStudio's array of excellent cheat sheets for the R community.

A hit-list of some of the most useful commands:

And the cheat-sheet itself can be downloaded here. 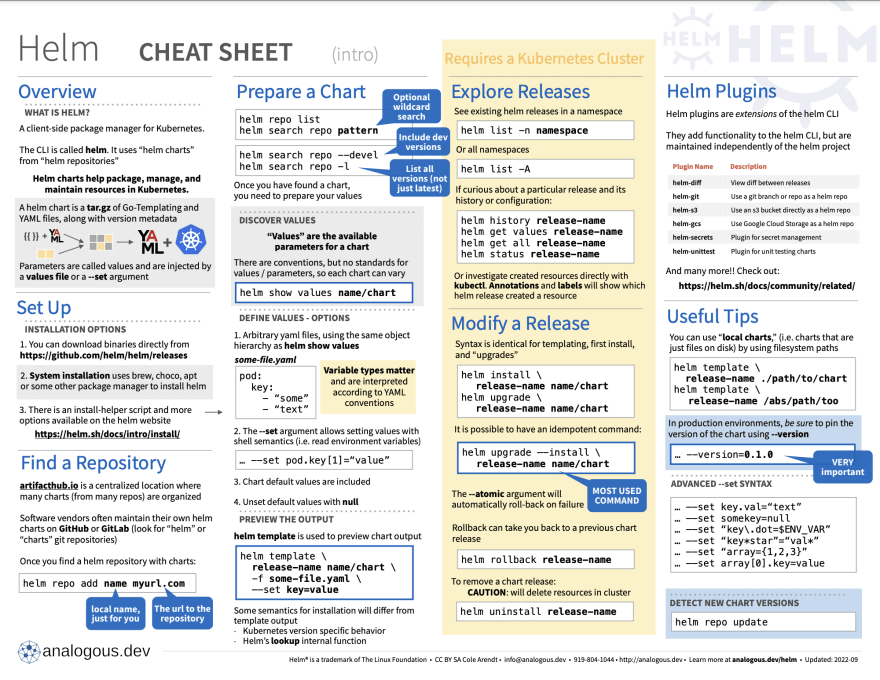 The helm project is an open source project. There is much that could be improved, and many applications that need helm charts or need
improved helm charts. You can make a difference! If you are interested in learning more, check out the helm tag on this blog to see other writing on
the topic, and start poking around on ArtifactHub, where lots of charts are centralized for easier searching!

Photo by william william on Unsplash

Setting up a GitLab Runner

Kubernetes Namespace: How To Use It To Organize And Optimize Costs

How to switch to Azure kubelogin

Once suspended, colearendt will not be able to comment or publish posts until their suspension is removed.

Once unsuspended, colearendt will be able to comment and publish posts again.

Once unpublished, all posts by colearendt will become hidden and only accessible to themselves.

If colearendt is not suspended, they can still re-publish their posts from their dashboard.

Once unpublished, this post will become invisible to the public and only accessible to Cole Arendt.

Thanks for keeping DEV Community 👩‍💻👨‍💻 safe. Here is what you can do to flag colearendt:

Unflagging colearendt will restore default visibility to their posts.