Since its release in 1995, JavaScript has gone through many changes from ECMAScript1 in 1997 to ECMAScript13 in 2022. 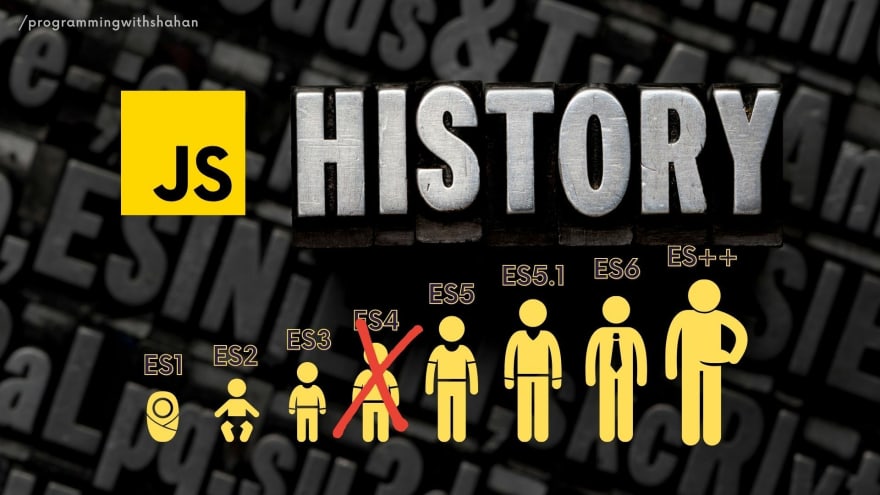 Before going forward, I would like to draw your attention on my YouTube Channel where I publish clear and concise web-development content based on JavaScript & React that you gonna love soon.

JavaScript was created at Netscape Communications by Brendan Eich in 1995. Netscape and Brendan Eich designed JavaScript as a scripting language for Netscape Navigator which was a leading web browser in the 1990s.

JavaScript's first name was Mocha. After that, it was known as Live Script and later known as JavaScript.

If you ever have to run programs in the browser, you definitely need to use JavaScript.

At first, JavaScript was used to add interactive web elements like button clicks, hover states, form validation, and so on.

Today, we can run JavaScript outside the browser thanks to Node.js which makes JavaScript a real software language to build full-stack applications. JavaScript is Everywhere.

The evolution of any programming language is community-driven.

That means no individual person can directly add new features until it goes through several stages of approval by a leading organization.

JavaScript’s evolution has been proceeded by a group of individual programmers, browser vendors(the companies that make and sell/provide browsers), and community leaders.

Anyone can submit a proposal to the ECMA (European Computer Manufacturers Association) committee that prioritize these proposals to decide what should be included in the coming feature or update.

In this way, after the first release of ECMAScript, the evolution goes through on and on each year until ES4 which became chaotic along with the political mess, and that version was never released.

Then in 2009, ES5 was released after a quite long gap. This update includes new array methods, object properties, and library support for JSON which made JavaScript more popular. This version was the first main revision of JavaScript.

In the year 2015, JavaSccript released another version of JavaScript called ES6 which was the second main revision of JavaScript. This update helped JavaScript developers to “write less do more” thanks to arrow functions, template strings, class destruction, modules, and so on.

After releasing ES6 or ES2015, JavaScript had a lot more momentum in releasing new features with proposals each year which is now called the yearly additions instead of calling main revision. Everything that goes into this stage proposal is called ESNext. Meaning this bounce of features will be added in the next major JavaScript release.

You can read currently finished proposals in 2022 on the official Ecma TC39 committee’s GitHub account.

JavaScript is No longer Limited to Browser

Before 2009, JavaScript couldn’t be run outside the browser and it was just limited to web programming.

In 2008, the creation of Google’s V8 engine which is traditionally called the Chrome V8 engine had come up which a high-performance JavaScript and WebAssembly engine, written in C++ programming language provided a crucial turning point for JavaScript.

Before that, the Netscape Commnucinications used Spider Monkey which was the first JavaScript Engine.

Fortunately, the Chrome V8 engine was so powerful that developers were able to build sophisticated web-based applications that performed just like mobile or desktop applications.

After that, Ryan Dahl who is a software engineer comes up with a great idea. He released an open-source JavaScript environment called Node.js which provided a way to run JavaScript outside of the browser.

It's time to Quiz. Here is the online quiz game that I created from this article.

Let me know in the comment section below about this quiz game.

It’s not true that JavaScript isn’t a real programming language. How could it be? Nowadays, JavaScript developers can build cross-platform mobile and desktop apps easily using JavaScript frameworks.

There are a lot of well-known popular applications that build with JavaScript. Discord app is one of them.

Thanks for your time and happy coding.

SQL tips for beginners; what I learned after 10+ years of occasionally writing queries and schemas as a web dev

Once suspended, codewithshahan will not be able to comment or publish posts until their suspension is removed.

Once unsuspended, codewithshahan will be able to comment and publish posts again.

Once unpublished, all posts by codewithshahan will become hidden and only accessible to themselves.

If codewithshahan is not suspended, they can still re-publish their posts from their dashboard.