I call it ReMaking Twitter but the app is not entirely the same. Specifically in the area of algorhtms that will fuel its communication patterns. It's just a quick way to communicate that basically it's a social media app.

I started working on Ghost a year ago on semicolon.dev domain name. Originally it was never meant to be a stand-alone messenger. Just a site for posting tech articles and generally to practice coding up a Node.js web server.

But as someone who already created social media platforms in the past (for fun and to learn how to code) many of the ideas that make Ghost what it is today have been marinated on for about a decade.

Creating an app in the same niche as Twitter you will essentially be creating the same type of underlying tech because the first task is to build a set of Minimum Required Features (MRF) - which users expect you to have or they simply won't even consider to continue using your platform.

This need exists regardless of the type of app you're creating. People generally have high expectations from modern-day apps.

Bad UX is often why many good ideas fail. People don't want to guess where features are. They want posting to be easy. They want everything to be fast.

MVP vs MRFI don't like the term MVP because there is nothing minimum about an app that's capable of working successfully. MRF is a more realistic term because you are thinking of listing a complete granular set of features.

Now this isn't as easy as it sounds. Because in order to create MRF you need a thorough understanding of the needs in your product niche. This requires a vision & some passion for the project based on positive intent toward its users.

In contrast, to create an MVP (which is the way it's traditionally done nowadays) many rely on treating their app as a side project subservient to more important things in life (watching your favorite Netflix show, keeping a decent full time job in tech, taking care of children, etc.)

The mental spark I had starting this post was one particular feature I was working on that you will see both on Twitter and Ghost.

Imagine a user who just posted 10 tweets in a row.

There is nothing wrong with doing that.

But the consequence is that it floods the timeline.

This creates at least two problems:

Why should this user get visibility of 10 or more posts in main timeline?

They shouldn't. Only their last post should be visible. The rest of the timeline should be flooded by posts made by all other users to be fair. But due to chronological nature of the timeline it's not as simple as simply removing all other posts by same user. Because other users might be tweeting in between any of that user's post too. And this special usecase needs to be preserved.

One way of doing this would be by reading only unique entries from a Mongo's tweet collection using Mongo's distinct() function. But it's not easy to use distinct() for timeline cleanse the way it's described in previous paragraph.

It's hard to make distinct() work in a way where while it returns only 1 post from the user who posted 10 posts in a row but retain their other posts on the timeline IF other users posted a tweet at any time between those tweets.

To do this right you're better off with simple forEach loop in JavaScript:

I use this code to filter the timeline and rid it from repeated posts.

Basically the logic is: skip next tweet if previous one was posted by same user.

Funny side effect I noticed: If someone else manages to post a message in between of any of those 10 posts, then their post will be sandwiched between two most recent posts by the user who posted 10 messages in a row.

You can become one of the earliest users on Ghost Messenger 🙂

Most usernames are still available so grab yours while it's still possible.

To install open it in Safari on iPhone and add it to Homescreen. 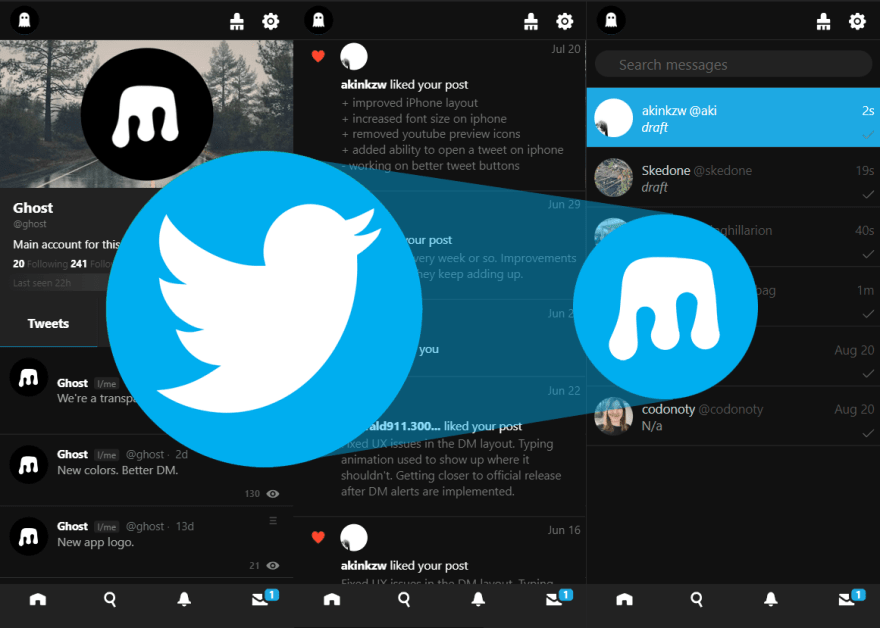 Code Something
Let's code something. Anything!
Run JavaScript In VSCode
#javascript #vscode #run

Once suspended, codesomething will not be able to comment or publish posts until their suspension is removed.

Once unsuspended, codesomething will be able to comment and publish posts again.

Once unpublished, all posts by codesomething will become hidden and only accessible to themselves.

If codesomething is not suspended, they can still re-publish their posts from their dashboard.

Once unpublished, this post will become invisible to the public and only accessible to Code Something.

Thanks for keeping DEV Community 👩‍💻👨‍💻 safe. Here is what you can do to flag codesomething:

Unflagging codesomething will restore default visibility to their posts.