What is CodeSec?
Contrast’s new free developer tool brings the fastest and most accurate scanner on the market right to developers for free. By packaging the same scanning engine used in our Contrast Security platform into a simple command-line interface (CLI), CodeSec empowers developers to scan, secure, and ship their code in minutes.

Getting Started with CodeSec - SCA in just 3 steps

1. Open a command-prompt or terminal, then install with NPM, Homebrew or by downloading binaries from Artifactory:

For this example will be using NPM. For other install options click here.

3. Time to Scan your Open Source!

Navigate to your chosen directory.
Then run a SCA scan on your Java, Javascript, Python, Ruby, GO, PHP, .NET code with the following command. 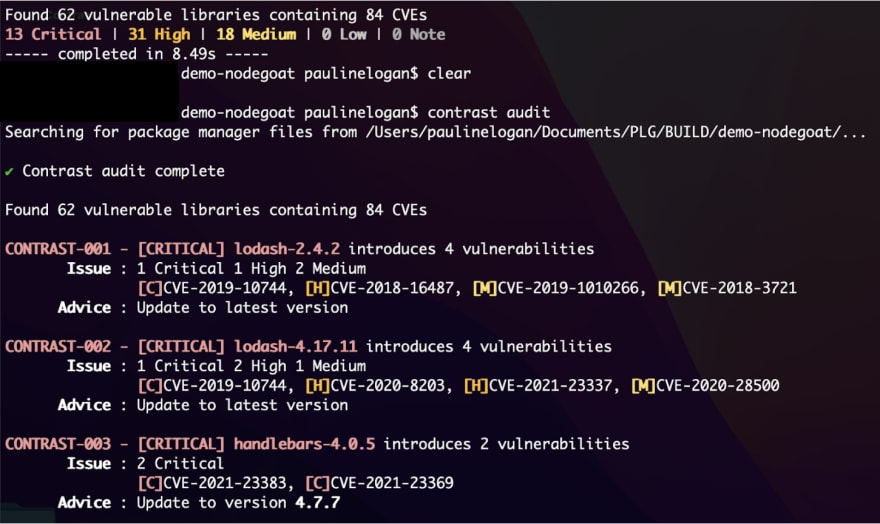 In minutes CodeSec by Contrast will report all vulnerabilities found with actionable remediation guidance.

CodeSec by Contrast Security
Scan, Secure, and Ship Code in Minutes for Free

Once suspended, codesec will not be able to comment or publish posts until their suspension is removed.

Once unsuspended, codesec will be able to comment and publish posts again.

Once unpublished, all posts by codesec will become hidden and only accessible to themselves.

If codesec is not suspended, they can still re-publish their posts from their dashboard.

Once unpublished, this post will become invisible to the public and only accessible to Orlandov14.

Thanks for keeping DEV Community 👩‍💻👨‍💻 safe. Here is what you can do to flag codesec:

Unflagging codesec will restore default visibility to their posts.