A Regular Expression – or regex for short– is a syntax that allows you to match strings with specific patterns. Think of it as a suped-up text search shortcut, but a regular expression adds the ability to use quantifiers, pattern collections, special characters, and capture groups to create extremely advanced search patterns.
Regex can be used any time you need to query string-based data, such as:

In this guide we'll cover:

This screenshot is of the regex101 website. All future screenshots will utilize this website for visual reference.

This regex may look complicated, but two things to keep in mind:

In fact, most regexes can be written in multiple ways, just like other forms of programming. For example, the above can be rewritten into a longer but slightly more readable version:

Most languages provide a built-in method for searching and replacing strings using regex. However, each language may have a different set of syntaxes based on what the language dictates.

In this article, we'll focus on the ECMAScript variant of Regex, which is used in JavaScript and shares a lot of commonalities with other languages' implementations of regex as well.

How to read (and write) regexes

Regex quantifiers check to see how many times you should search for a character.

For example, the following regex:

Matches both the string "Hello" and "Goodbye".

These can even be combined with one another:

Here we're looking for strings with zero-to-one instances of "e" and the letter "o" times 2, so this will match "Helloo" and "Hlloo".

One of the regex quantifiers we touched on in the previous list was the + symbol. This symbol matches one or more characters. This means that:

Will match everything from "Hi" to "Hiiiiiiiiiiiiiiii". This is because all quantifiers are considered "greedy" by default.

However, if you change it to be "lazy" using a question mark symbol (?) to the following, the behavior changes.

Now, the i matcher will try to match as few times as possible. Since the + icon means "one or more", it will only match one "i". This means that if we input the string "Hiiiiiiiiiii", only "Hi" will be matched.

While this isn't particularly useful on its own, when combined with broader matches like the the . symbol, it becomes extremely important as we'll cover in the next section. The . symbol is used in regex to find "any character".

Now if you use: 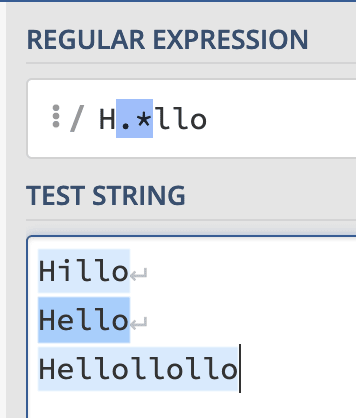 However, what if you want to only match "Hello" from the final example?

Well, simply make the search lazy with a ? and it'll work as we want: 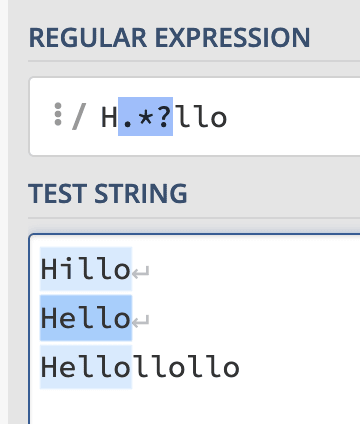 Pattern collections allow you to search for a collection of characters to match against. For example, using the following regex:

You could match the following strings:

Here's a list of the most common pattern collections:

You can even combine these together:

Not every character is so easily identifiable. While keys like "a" to "z" make sense to match using regex, what about the newline character?

The "newline" character is the character that you input whenever you press "Enter" to add a new line.

So if you wanted to remove every character that starts a new word you could use something like the following regex:

And replace the results with an empty string. Doing this, the following: 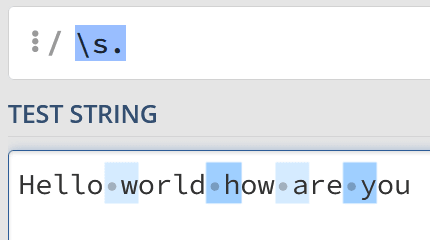 These tokens aren't just useful on their own, though! Let's say that we want to remove any uppercase letter or whitespace character. Sure, we could write

But we can actually merge these together and place our \s token into the collection: 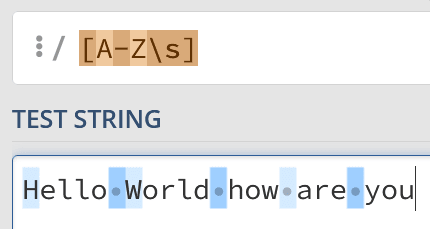 In our list of tokens, we mentioned \b to match word boundaries. I thought I'd take a second to explain how it acts a bit differently from others.

Given a string like "This is a string", you might expect the whitespace characters to be matched – however, this isn't the case. Instead, it matches between the letters and the whitespace: 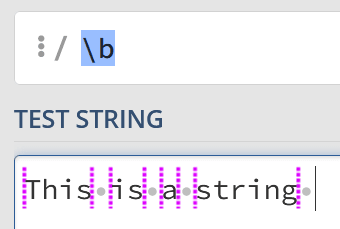 This can be tricky to get your head around, but it's unusual to simply match against a word boundary. Instead, you might have something like the following to match full words: 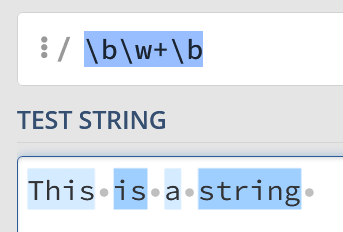 Two more tokens that we touched on are ^ and $. These mark off the start of a line and end of a line, respectively.

To match one or more "word" characters, but only immediately after the line starts. Remember, a "word" character is any character that's an uppercase or lowercase Latin alphabet letters, numbers 0-9, and _. 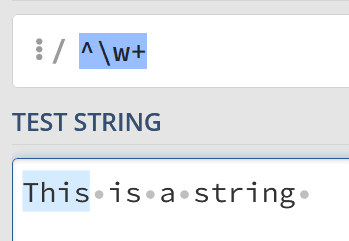 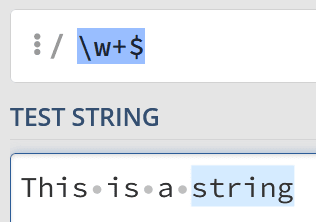 However, just because these tokens typically end a line doesn't mean that they can't have characters after them.

For example, what if we wanted to find every whitespace character between newlines to act as a basic JavaScript minifier?

Well, we can say "Find all whitespace characters after the end of a line" using the following regex: 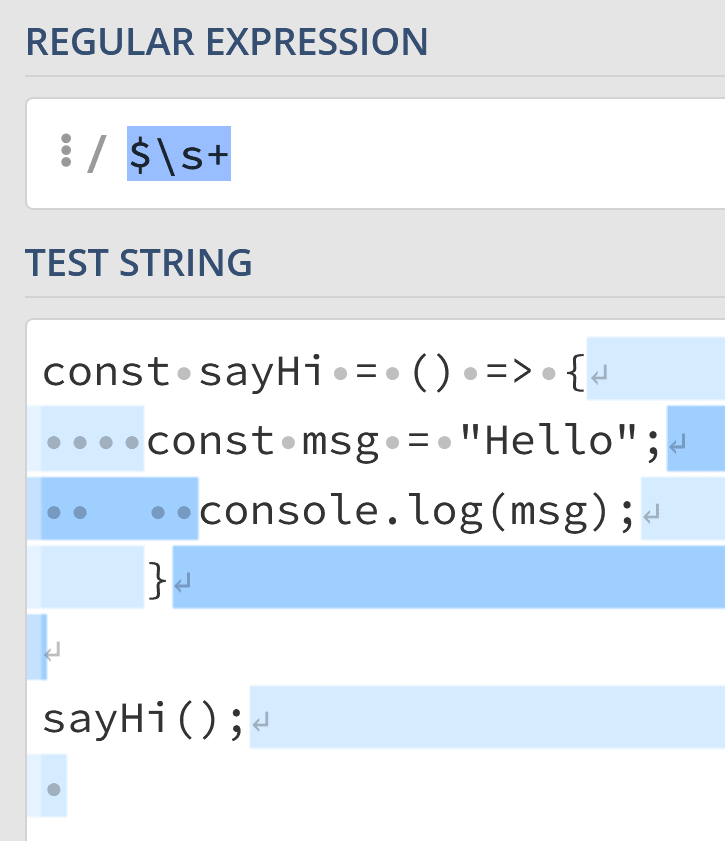 While tokens are super helpful, they can introduce some complexity when trying to match strings that actually contain tokens. For example, say you have the following string in a blog post:

Or want to find every instance of this blog post's usage of the "\n" string. Well, you can escape characters using \. This means that your regex might look something like this:

How to use a regex

Regular expressions aren't simply useful for finding strings, however. You're also able to use them in other methods to help modify or otherwise work with strings.

While many languages have similar methods, let's use JavaScript as an example.

First, let's look at how regex strings are constructed.

In JavaScript (along with many other languages), we place our regex inside of // blocks. The regex searching for a lowercase letter looks like this:

This syntax then generates a RegExp object which we can use with built-in methods, like exec, to match against strings.

We can then use this truthiness to determine if a regex matched, like we're doing in line #3 of this example:

We can also alternatively call a RegExp constructor with the string we want to convert into a regex:

You can also use a regex to search and replace a file's contents as well. Say you wanted to replace any greeting with a message of "goodbye". While you could do something like this:

However, something you might notice is that if you run youSayHelloISayGoodbye with "Hello, Hi there": it won't match more than a single input:

Here, we should expect to see both "Hello" and "Hi" matched, but we don't.

This is because we need to utilize a Regex "flag" to match more than once.

A regex flag is a modifier to an existing regex. These flags are always appended after the last forward slash in a regex definition.

Here's a shortlist of some of the flags available to you.

This means that we could rewrite the following regex:

To use the case insensitive flag instead:

With this flag, this regex will now match:

Or any other case-modified variant.

As we mentioned before, if you do a regex replace without any flags it will only replace the first result:

However, if you pass the global flag, you'll match every instance of the greetings matched by the regex:

A note about JavaScript's global flag

When using a global JavaScript regex, you might run into some strange behavior when running the exec command more than once.

In particular, if you run exec with a global regex, it will return null every other time:

This is because, as MDN explains:

JavaScript RegExp objects are stateful when they have the global or sticky flags set… They store a lastIndex from the previous match. Using this internally, exec() can be used to iterate over multiple matches in a string of text…

The exec command attempts to start looking through the lastIndex moving forward. Because lastIndex is set to the length of the string, it will attempt to match "" – an empty string – against your regex until it is reset by another exec command again. While this feature can be useful in specific niche circumstances, it's often confusing for new users.

To solve this problem, we can simply assign lastIndex to 0 before running each exec command:

Here, we can see matching against both Testing 123 and Tests 123 without duplicating the "123" matcher in the regex.

Groups are defined by parentheses; there are two different types of groups--capture groups and non-capturing groups:

The difference between these two typically comes up in the conversation when "replace" is part of the equation.

For example, using the regex above, we can use the following JavaScript to replace the text with "Testing 234" and "tests 234":

We're using $1 to refer to the first capture group, (Testing|tests). We can also match more than a single group, like both (Testing|tests) and (123):

However, this is only true for capture groups. If we change:

Then there is only one captured group – (123) – and instead, the same code from above will output something different:

While capture groups are awesome, it can easily get confusing when there are more than a few capture groups. The difference between $3 and $5 isn't always obvious at a glance.

To help solve for this problem, regexes have a concept called "named capture groups"

You can use them in a regex like so to create a group called "num" that matches three numbers:

Then, you can use it in a replacement like so:

Sometimes it can be useful to reference a named capture group inside of a query itself. This is where "back references" can come into play.

Say you want to match:

While you could write a regex that repeats the word "James" like the following:

Now, instead of having two names hardcoded, you only have one.

Lookahead and behind groups are extremely powerful and often misunderstood.

There are four different types of lookahead and behinds:

Will allow you to match BC but not BA.

You can even combine these with ^ and $ tokens to try to match full strings. For example, the following regex will match any string that does not start with "Test"

Likewise, we can switch this to a positive lookahead to enforce that our string must start with "Test" 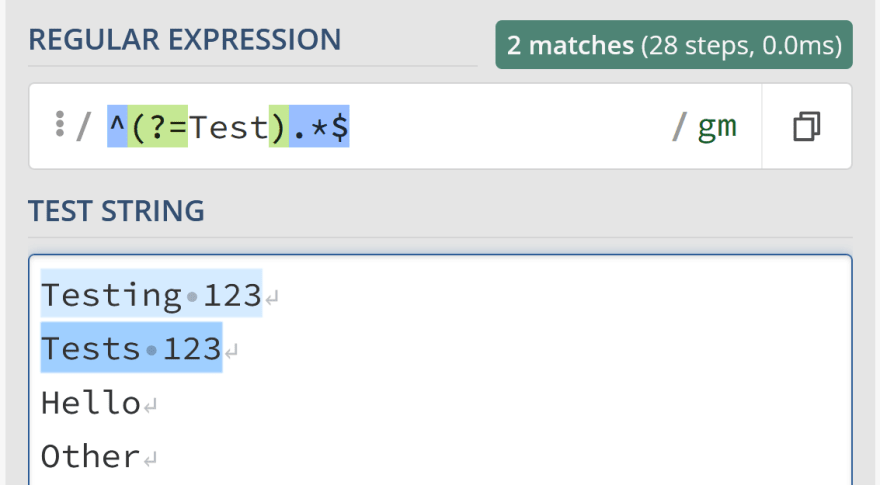 Regexes are extremely powerful and can be used in a myriad of string manipulations. Knowing them can help you refactor codebases, script quick language changes, and more!

Let's go back to our initial phone number regex and try to understand it again:

Remember that this regex is looking to match phone numbers such as:

Here this regex is:

Hopefully, this article has been a helpful introduction to regexes for you. If you'd like to see quick definitions of useful regexes, check out our cheat sheet.

How old are you in programming ?

BUILDING A FANCY CALCULATOR WITH JAVASCRIPT

CoderPad is a technical interview platform for leading development teams.