Argo Rollouts is a progressive delivery controller created for Kubernetes. It allows you to deploy your application with minimal/zero downtime by adopting a gradual way of deploying instead of taking an “all at once” approach.

In the previous article, we have seen blue/green deployments. In this article, we will see an example that combines canary deployments with Prometheus metrics that automatically rolls back an application if the new version is not passing specific metric thresholds.

Here is the theory: 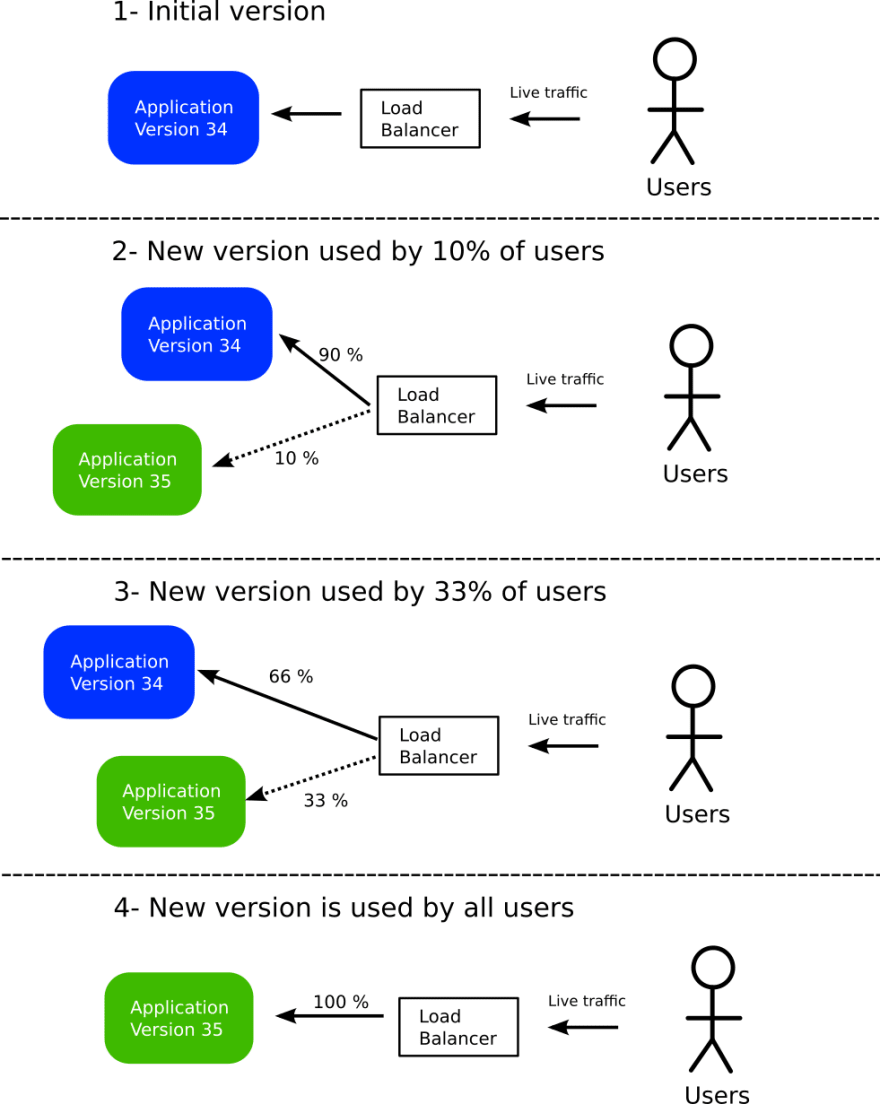 In the beginning, we have a single version of the application running. All live traffic from users is sent to that version. A key point here is that a smart proxy/load balancer acts as an intermediate between users and infrastructure. In the original state, this load balancer sends 100% of the traffic to the stable version.

In the next stage, we launch a second version of the application. We then instruct the load balancer to route 10% of the traffic to the new version. This means that if the new version has issues only a small number of users will be affected. This version acts as a “canary” that will notify us if something is wrong with the new deployment well in advance of a full rollout.

If we think the new application reacts well to live traffic we can increase the percentage of users that are redirected to it. In the second stage, we have chosen to route 1/3rd of all traffic. This means that we still have a failsafe and can always switch back all traffic to the previous version, but we can also see how our version behaves under a representative amount of traffic.

In the last step, we modify the load balancer and send 100% of the traffic to the new version. We can now discard the old version completely. We are back to the original state

Notice that the number of stages, as well as percentage of traffic, is user defined. The numbers we used (10% at stage 1 and 33% at stage 2) are just an example.

Depending on your network setup you can also have advanced routing decisions and instead of blinding redirecting a subset of traffic, you should choose who gets to see the new version first. Common examples are users from a specific geographical area or users from a particular platform (e.g. mobile users first).

Now that we have seen how canary deployments work in general, let’s see what Argo Rollouts does with Kubernetes.

Argo Rollout is a Kubernetes controller and has several options for Canary deployment. Some of the most interesting capabilities are the native integration with networking solutions (for the traffic split) and with metric solutions for automatic promotions between canary stages.

One the most basic feature, however, is the way Argo Rollouts treats Kubernetes services during a canary release. Whenever a canary is active, Argo Rollouts can create 3 services for you

You can easily install the operator in your cluster by following the instructions.

You can find the example application at https://github.com/codefresh-contrib/argo-rollout-canary-sample-app. It is a simple Golang application that exposes some basic Prometheus metrics and has no other dependencies.

Before you use the example you need to install an ingress or service mesh in your cluster that will be used for the traffic split. Argo Rollouts supports several solutions including SMI support. We will use Linkerd for our example.

To perform the initial deployment, clone the git repository locally and edit the file canary-manual-approval/rollout.yaml by replacing CF_SHORT_REVISION with any available tag from Dockerhub (for example c323c7b)

Save the file and then perform the first deployment with

Here is the initial state using the kubeview graphical tool.

The next step is to create a new version of the application. You can either change again the image tag on the manifest (and run kubectl apply again) or simply use the shortcut offered by Argo Rollouts

The image tag you use is arbitrary. It just needs to be different than the current one. As soon as Argo Rollouts detects the change it will do the following:

Here is how it looks in Kubeview:

The CLI will also report the split of traffic: 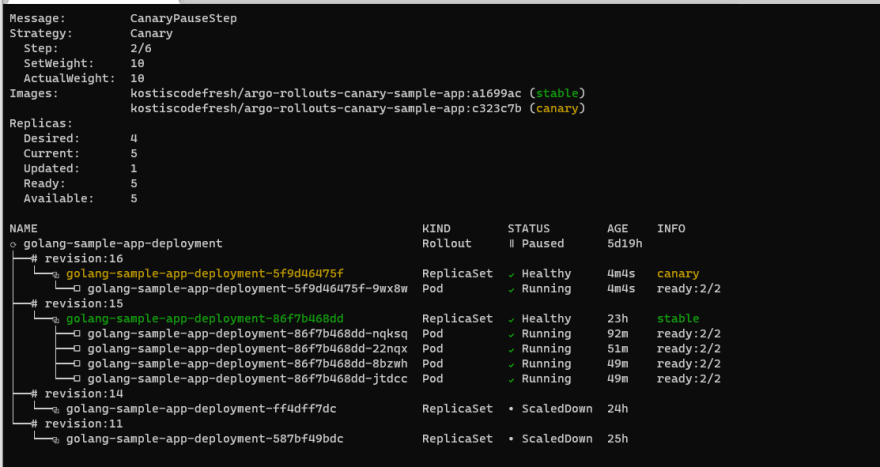 You can see also in the “setWeight” option that the canary only gets 10% of the traffic right now.

So now only a subset of all users can see the new version. At this stage, it is your responsibility to decide if the canary version is ok. Maybe you want to run some smoke tests or look at your metrics for the canary (we will automate this in the next section).

Once you are happy with the canary you can move more live traffic to it by promoting it.

Argo Rollouts will create more pods for the canary release and shift more traffic to it:

At this stage, 33% of traffic is sent to the canary pods as defined in the Rollout specification:
With this amount of traffic, more users are exposed to the new version and any immediate problems should be easier to spot in your metrics or other monitoring mechanisms.

Assuming that everything still looks good you can promote the canary a second time:

Argo Rollouts will now shift all traffic to the canary pods and after a while discard the previous version:

We are now back to the original state where all 3 services point at the new version.

A new deployment will repeat the whole process.

If for some reason your smoke tests fail, and you don’t want to promote the new version you can abort the whole process with

You can also go back to a previous version with

Argo rollouts has more options that allow you to choose the number of versions that stay behind, the amount of time each version is kept, which version to roll back to, and so on.

Notice also that for simplicity reasons, the three services in the example are powered by Load Balancers. Check the pricing of your Cloud provider before running this example on your own and be sure to clean up everything after you finish.

Automating everything with Codefresh and Prometheus

Now that we have seen how you can perform manually canary deployments, it is time to automate the deployment process with Codefresh pipelines.

We could write a similar pipeline as in our blue/green example that pauses the pipeline at each canary step and then goes to the next stage by waiting for manual approval. You can find an example pipeline at https://github.com/codefresh-contrib/argo-rollout-canary-sample-app/blob/main/canary-manual-approval/codefresh.yaml

Remember however that the whole point of automation is to remove as many as possible manual steps. Thankfully Argo Rollouts has native support for several metric providers. By evaluating the metrics of your application at all canary stages we can completely automate the whole process by having Argo Rollouts automatically promote/demote a canary according to your metric criteria.

Here is the pipeline that we will create:

Notice how simple the pipeline is. Argo Rollouts will take care of all promotions automatically behind the scenes.

Our example is already instrumented with Prometheus metrics. We will add an Analysis in our canary deployment. You can see the full details at https://github.com/codefresh-contrib/argo-rollout-canary-sample-app/blob/main/canary-with-metrics/analysis.yaml

This analysis defines that we will go to the next stage of the canary only if a particular PromQL statement (number of requests that return 2xx HTTP status divided by all requests) returns over 95%
If at any point metrics fall below this threshold, the canary will be aborted.

Here is the whole pipeline:

You now have true Continuous Deployment! All deployments are fully automatic and “bad” application versions (that don’t pass our metrics) will be reverted automatically.

For more details on Canary deployments as well as the example with manual approval see the documentation page.

Once suspended, codefreshio will not be able to comment or publish posts until their suspension is removed.

Once unsuspended, codefreshio will be able to comment and publish posts again.

Once unpublished, all posts by codefreshio will become hidden and only accessible to themselves.

If codefreshio is not suspended, they can still re-publish their posts from their dashboard.

Once unpublished, this post will become invisible to the public and only accessible to Kostis Kapelonis.

Thanks for keeping DEV Community 👩‍💻👨‍💻 safe. Here is what you can do to flag codefreshio:

Unflagging codefreshio will restore default visibility to their posts.