If you want to get notified when I publish new blog posts or
make major project announcements, head over to
https://cleancodestudio.paperform.co/

This is How [JavaScript] Promises Really Work

Promises are one technique to handle asynchronous code,
otherwise known as your first class ticket out of callback hell. 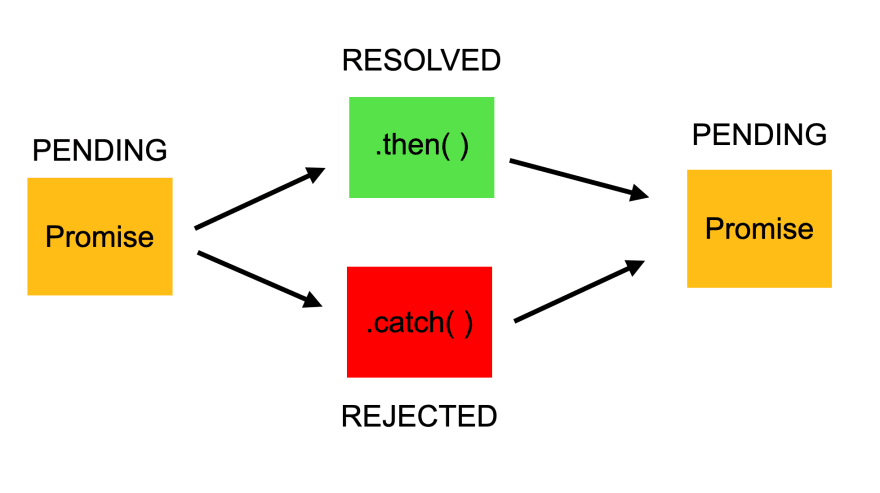 3 State's of a Promise

What is a promise?

Commonly, a promise is defined as a proxy for a value that will eventually become available.

Async functions use promises behind the scenes, thus - especially with todays distributed cloud architectures becoming more common - understanding what promises are and how they work is more important than ever!

Now that we know promises are important, let's dive in.

Your code calls a promise. This promise will start in what is known as its pending state. What's this mean?

A promise starts in a pending state and eventually ends in a resolved state or a rejected state.

One callback handles the data returned from a promise when it ends in a resolved state.

The other callback handles the data returned from a promise when it ends in a rejected state.

Which JavaScript APIs use promises?

Your own code and libraries will most likely use promises throughout. That being noted, promises are actually used by standard modern web APIS. Here's a couple web APIs that also use promises.

In modern JavaScript, it's pretty unlikely you'll find yourself in a situation where you're not using promises - so let's dive deep and start understanding them.

JavaScript has a Promise API. The Promise API exposes a promise constructor, which you initialize using new Promise():

What if we call neither the resolve nor the reject callback? Well, as you might be putting together, then the promise remains in its pending state.

Simple enough, three states - two callback functions to switch to Resolved State or Rejected State, if we call neither callback then we simply remain in the Pending State.

A more common example that may cross your path is a technique known as Promisifying.

Promisifying is a way to be able to use a classic JavaScript function that takes a callback, and have it return a promise:

In recent versions of Node.js, you won't have to do this
manual conversion for a lot of the API. There is a
promisifying function available in the util module that will > do this for you, given that the function you're
promisifying has the correct signature.

Now that understand how a promise can be created using new Promise() as well as the Promisifying technique, let's talk about consuming a promise.

Running checkIfItsDone() will specify functions to execute when the isItDoneYet promise resolves (in the then call) or rejects (in the catch call).

What if we want to call another promise directly after a previous promise is returned. We can do this, and it's simply called creating a chain of promises.

An example of chaining promises can be found within the Fetch API, which may be used to get a resource and queue (First in First out line) a chain of promises to execute when the resource is fetched.

For starters, let's first point out that the Fetch API is a promise-based mechanism. Calling the fetch() method is equivalent to defining our own promise using new Promise().

Here's an example of chaining promises fluently together:

Well, in the example above we call fetch() to get a list of items from the items.json file found in the domain root.

Then we create a chaing of promises.

response also contains a method callable as json(). Responses json method returns a promise that will resolve with the content of the body data processed and transformed into JSON.

Then we have a final promise in our chain passed in as a anonymous callback function.

This function simply logs that we were successful and console logs the successful requests json data.

_"What if the first promise was rejected though?"

If the first promise would have been rejected, or the second promise, or the third - then, no matter the step, we're automatically going to default to the catch callback method that is visually shown at the end of our fluent promise chain.

We have a promise chain, something fails, uh oh - so what happens?

If anything in the chain of promises fails and raises an error or ultimately sets the promise's state to a Rejected Promise State, the control goes directly to the nearest catch() statement down our promise chain.

What if we raise an error inside a catch()? Well, check it - we can simply append a second catch(). The second catch() will handle the error (or more specifically error message) and so on.

Okay, so now we're solid when it comes to a single promise and our foundational understanding of promises in general.

Getting more advanced, let's ask another question. If you need to synchronize different promises - say pull data from multiple endpoints and handle the resolved promise data from all of the promises created and used to retrieve results from these differing endpoints - how would we do it?

How would we synchronize different promises and execute something when they are all resolved?

Promise.all() helps us define a list of promises and execute something when they are all resolved - it allows us to synchronize promises.

With destructuring, we can simplify this example to:

What if we want to get all of the data from these multiple APIs, but we really only need enough data returned from one endpoint to show on our page?

That is we need to resolve all of our promises no matter what, however we want to do something with the data from the first resolved promise and we don't care which promise is resolved first.

To handle the data from the first resolved promise we can use Promise.race().

Promise.race() runs when the first of the promises you pass to it resolves, and it runs the attached callback just once, with the result of the first promise resolved.

If you want to get notified when I publish new blog posts or
make major project announcements, head over to
https://cleancodestudio.paperform.co/

Once suspended, cleancodestudio will not be able to comment or publish posts until their suspension is removed.

Once unsuspended, cleancodestudio will be able to comment and publish posts again.

Once unpublished, all posts by cleancodestudio will become hidden and only accessible to themselves.

If cleancodestudio is not suspended, they can still re-publish their posts from their dashboard.

Once unpublished, this post will become invisible to the public and only accessible to Clean Code Studio.

Thanks for keeping DEV Community 👩‍💻👨‍💻 safe. Here is what you can do to flag cleancodestudio:

Unflagging cleancodestudio will restore default visibility to their posts.