The jacoco-badge-generator began its life as a GitHub Action for use in GitHub workflows to do the following: parse a JaCoCo coverage report, generate coverage badges as SVGs entirely within GitHub Actions, optionally generate Shields JSON badge endpoints rather than direct badge generation, and optionally to perform pull request checks to fail workflow runs if coverage or branches coverage is below a user-configurable threshold, or if coverage or branches coverage decreased relative to prior run. It is suitable for use with Java projects, as well as projects with any other JVM language supported by JaCoCo such as Kotlin. The badges can be configured in a variety of ways, such as color scheme (e.g., mapping from coverage ranges to colors), and label text (e.g., defaults are "coverage" and "branches" but for a multi-module project, you might want something like "coverage (module name)" and "branches (module name)").

At the request of multiple users, the jacoco-badge-generator can now also be used as a command-line utility outside of GitHub Actions, such as executing it from a local build script. For this CLI use-case, it can now be installed locally from PyPI using pip. The jacoco-badge-generator is implemented 100% in Python. Within GitHub Actions, it is a container Action, relying on Docker to ensure a compatible Python version is available within the workflow. As a CLI tool, Docker is not needed, but you must have a compatible version of Python installed. It has been tested with Python 3.8, 3.9, and 3.10 (it may or may not work with earlier versions).

The remainder of this post is organized as follows:

The GitHub repository includes the source code, as well as more detailed documentation including additional examples: 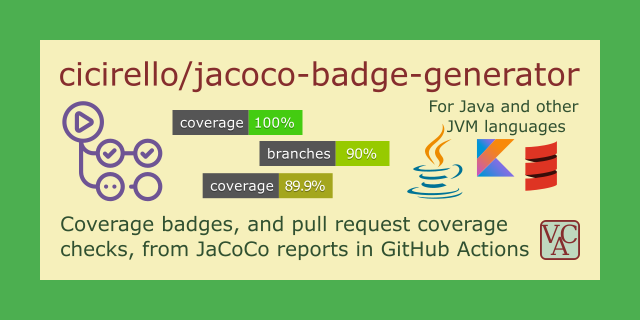 Check out all of our GitHub Actions: https://actions.cicirello.org/

The jacoco-badge-generator can be used in one of two ways: as a GitHub Action or as a command-line utility (e.g., such as part of a local build script). The jacoco-badge-generator parses a jacoco.csv from a JaCoCo coverage report, computes coverage percentages from JaCoCo's Instructions and Branches counters, and generates badges for one or both of these (user configurable) to provide an easy to read visual summary of the code coverage of your test cases. The default behavior directly generates the badges internally with no external calls, but the action also provides an option to instead generate Shields JSON endpoints. It supports both the basic case of a single jacoco.csv, as well as multi-module projects in which case the action can produce coverage badges from the combination of…

In addition to the GitHub repository, embedded above, there is also a template repository with a few runnable GitHub workflows:

The purpose of this repository includes:

Why is this Repository a Template?

I made this repository a template to make it easy for someone to use it to get started on a new project. To use this to start a new project, click the "Use this Template" button. Depending on which starter workflow you want to use, you might want to select the option to include all branches. If you are not sure, then for now include all branches. You can always delete unneeded branches afterwards.

You are also free to fork this repository if you want (e.g if you want to contribute to it with a pull request or…

The following example workflows demonstrate how to use some of the functionality. See the GitHub repository for complete documentation.

This first example GitHub workflow uses all of the default inputs, and also assumes the JaCoCo report is in Maven's default location. The default behavior only generates the coverage badge (and does not generate the branches coverage badge). The jacoco-badge-generator doesn't commit the badge, so there is an additional step in this workflow to do that.

If you want badges for both instructions coverage and branches coverage, replace the jacoco-badge-generator step with:

If you'd rather generate JSON instead of SVG badges that you can then pass to Shields custom endpoint, you can use the following step:

Example 5: Gradle rather than Maven

All of the above examples assume that you are running the tests with Maven. If you are using Gradle, you can replace the Maven step and the jacoco-badge-generator step with something like the following, which runs the tests and JaCoCo with Gradle rather than Maven, and which passes Gradle's location of the JaCoCo report to the jacoco-badge-generator:

The PyPI package page is found at: 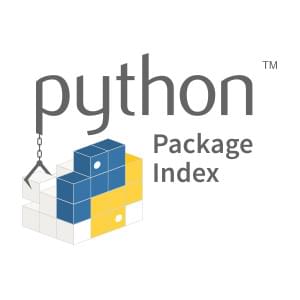 Installing the CLI utility from PyPI

To install from PyPi (Unix and MacOS):

To install from PyPi (Windows):

Generates only the instructions coverage badge, and assumes the report is in Maven's default location:

If you want to generate Shields JSON endpoints instead of badges, you need
to disable generating the coverage badge, and enable the JSON endpoints:

The utility by default assumes that the JaCoCo report is the Maven default of target/site/jacoco/jacoco.csv. If it is somewhere else, there is an option
to specify its location. Here is an example with Gradle's standard location and name of the JaCoCo csv report.

You can find additional information about the jacoco-badge-generator and other GitHub Actions that I've implemented on the following website: 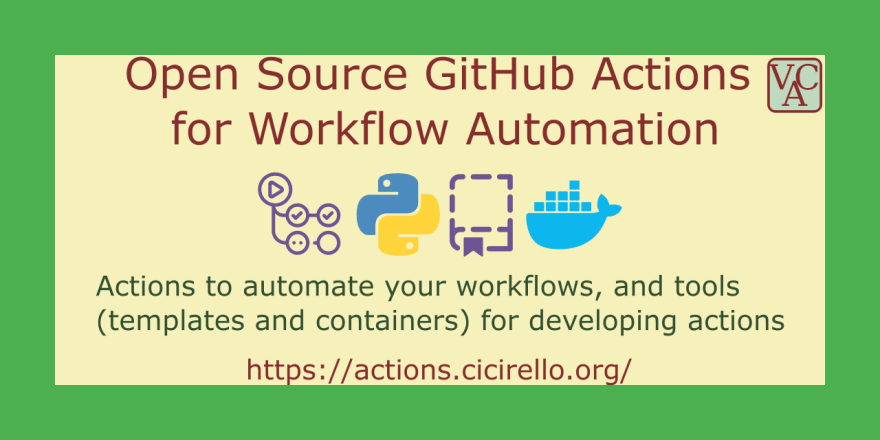 Features information on several open source GitHub Actions for workflow automation that we have developed to automate parts of the CI/CD pipeline, and other repetitive tasks. The GitHub Actions featured include jacoco-badge-generator, generate-sitemap, user-statistician, and javadoc-cleanup.

Here is an earlier DEV post about the jacoco-badge-generator, including an example GitHub workflow that also comments the coverage percentage on pull requests:

You can support the project in a number of ways:

GitHub and GitLab: Diagrams in Markdown

The flying start of your blog with Pelican and Github Pages