About the Unity Interaction Toolkit

The Unity XR Interaction Toolkit is a Package Provided by Unity for creating VR, AR Experiences. It provides a framework that makes VR and UI interactions available from Unity input events(Keyboards, Gamepads, and Controllers, etc.). The core of this system is a set of base Interactor and Interactable components and prefabs and an Interaction Manager that enables the relative working of these two components. It also contains helper components that you can use to extend functionality for drawing visuals and hooking in your interaction events. It can be used in both VR and AR Instances and comes with different functions, scripts, and classes for building gameplay.

The Unity XR Interaction Toolkit is a very new package released in the fall of 2019 to take the place of popular VR and AR Plugins like the HTC Vive Utility plugins, Oculus VR Plugin, VRTK, etc. The goal is to provide a framework that allows simple integration of different VR SDKs, i.e (Building experiences that can be tailored to different standalone/ VR Headsets without hassles). Without diving into the details - The XR Interaction toolkit works to detect the device plugged in and switches functionality to it solely.

Now I can go on with more explanation but, a much better way for you to grasp the whole concept involved is through visualization and hands-on testing. For this reason, In the next section, we look at how to install and open in Unity a Starter template that uses the XR Interaction Toolkit for VR development.

Now we are gonna install the Starter Template which we are later going to open in Unity before we can start understanding each component in detail, to begin, follow the steps below or even the Guide video; 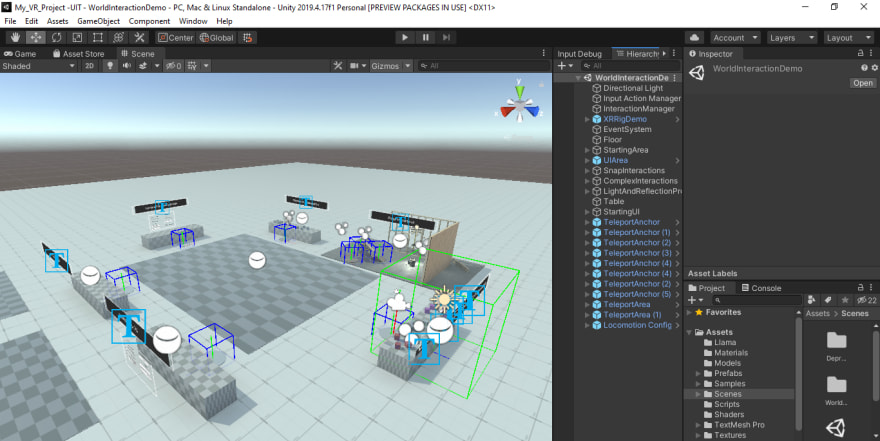 Now that you have it opened up, we can move on to the more juicy part of this article 😉; Explaining what is happening on the screen and how to set up for a VR project. Let's quickly get down to it

By features, what do I mean? I mean this; What can you as a developer achieve with UIT. In this section, I hope to give you a general to specifics scoped idea without anything much as Jargon!.

After Playing around with a few VR SDKs before my recent relationship with Unity's UIT, I had one goal in mind - Build a prototype VR Project. Back then, I used VRTK to test the waters and now I use UIT rather comfortably for someone without previous experience with P_lugins and SDKs integration. My honest opinion is that I love UIT and wish more features can be added to it because it makes building so much easier.

It's fair to say that UIT hasn't reached the level of functionalities VRTK and other SDKs bring to the table but there's one important aspect VR Developers need; multi-platform development which it has great promise for. Less talk now, let's meet the features of my new best friend.

Truly, there are always more features that I decide to not mention here, the above more-important ones are the core of UIT that must be understood while others can be picked up along the way. Dash it all! I have built a working VR Prototype Project with just the core features explained above 🥱. Oh, I promise, More good stuff to come.

According to Statista, Oculus Rift and Quest hold the highest percentage of VR Games Published by Developers on a VR/AR Platform, this stands at 25% & 24% respectively with HTC Vive coming in at 20% rather fairly. If this doesn't ring a bell, Well, Nothing might for you. Because Oculus is the fastest-growing Platform both for Developers and Gamers. - For Devs, Revenue - For Gamers, Premium Entertainment (Absolutely Relative). As such, developers at Oculus were quick to get news about Unity's revised plan and created a plugin just for folks adopting the UIT package for VR Development. Today, You are gonna learn about this High-Budget Plugin.

If you want to create games for Oculus Standalone Headsets or Oculus Go and also plan to use the UIT package, one thing is constant - You need the Oculus XR Plugin. Much of what I talked about above applies to it as well, so you probably do get the hang of what it goes. So now, let's go right into how to install and configure it for the current starter scene in Unity (if you have it open, and not having ignored me this whole time). Follow the Ordered steps below, I won't write it twice:

That's it! After you complete these steps, you can now "hopefully" run the Game view and experience the scene in VR. Indeed very easy, just my thought too.

The idea here is this, you can play or create any small scene with a few objects directly in Unity, Using the XR Interaction toolkit, by ensuring that a few certain prefabs are present in the Scene! What are they? Where can you find them in?. As we move into the next section we are gonna tackle these questions, that way I kill two birds with a stone. 😎

You now know how to set up UIT with your Oculus Headset but there's one more detail I need to observe - What if you have no Headsets and you just love VR?. I was once in that same position and I can tell you that it's not as impossible as everyone says it is - Developing without a Headset. Unity in part has made this possible with the Mock HMD XR Plugin.

In simple terms, the above reference means this - An Head Mounted Display that isn't a real version but mimics how the real version operates. Similar to the Oculus XR Plugin we looked at above, the Mock HMD Display allows you to move and interact in a virtual world without the need for a headset. It collects input actions from the plain old Keyboard, Gamepads, and other input devices. The Mock HMD functions in a similar way to how you'd expect the Oculus XR Plugin to; Basic interactions are mapped similarly with little changes in the input method. To set up a Mock HMD in your Project, follow the same steps that apply for the OCP by of course searching and installing from the package manager; Mock HMD XR. When Installed, don't expect it to work from the onset because there is a little more process involved.

You don't want to be stuck to the starter template without building from scratch. Like I mentioned earlier, some particular prefabs need hooking up together for UIT to be fully integrated into a project, take note of them because they are listed below. Access them by simply searching in the projects tab search;

And the list goes On as complexity increases. Now that you have a good solid understanding of the UIT package, focus for 5 minutes on the scene reading prefabs names and viewing their properties in the Hierarchy. It has been a very long Guide and as much as I have tried to make it all well if for instance you prefer or need further assistance through video, Splendid!, I have a video on just this topic.

For In-depth Jargonified analysis and docs, I have provided easy links below to some of the important points taught in this guide:

Consequently, after this long tutorial guide, naturally, you should run into a lot of errors, I should highly doubt if you tried this if you say u didn't. I expect your feedback on all these along with how impressive you thought this guide to be. Very commonly said but truly honest as well, 'It helps me prepare better informational guides'. I thank you very much for reading. If you please, watch my tutorial in the video about how to set-up the UIT specifically on a Gamepad.