1) Handsfree.js - A web based Face Pointer 2) Controlling YouTube 360 videos handsfree with Handsfree.js 3) Puppeteering Emojis with face morphs through Handsfree.js 4) Face Painting with P5.js 5) How to start and stop videos from a distance with your hand ✋ 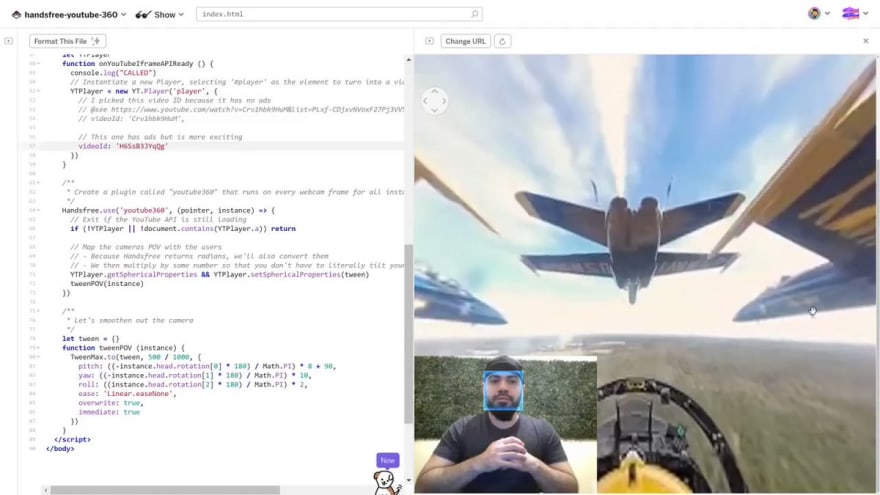 Added a more exciting 360 video so that you can really check out the handsfree controls: handsfree-youtube-360.glitch.me

Also wrote a step-by-step tutorial on how to set this demo up with Handsfree.js: dev.to/heyozramos/con…

If you've ever tried watching a 360 video on YouTube on your desktop with a mouse or trackpad, you'll immediately have been frustrated by how awkward it is to control the camera. The reason is that they're really meant to be viewed through a VR headset with the aid of your phone's gyroscopic sensors.

In this tutorial we'll explore a handsfree alternative that lets you control the POV with your head, using the rotation properties exposed by the Weboji model through Handsfree.js. If you haven't already, check out my introduction to Handsfree.js to help you get started quickly.

Fortunately, YouTube doesn't require an API key to get this started. Simply add the Handsfree.js dependencies along with the YouTube API library:

The YouTube API will look for a onYouTubeIframeAPIReady method once it's loaded, so let's add our YouTube video logic in there. We'll also add a div#player element to transform into a video:

And that's it, if you run the above you should see a 360 video being played automatically!

The next step is to add head controls with Handsfree.js. First we'll need to instantiate an instance of Handsfree. Then we'll create a plugin called youtube360 that simply maps the YouTube's camera with the users head pose:

Finally, let's add a start button. It's good etiquette to always ask the user to start the webcam!

And that's all there is to it!

A recap of what we've learned so far

In this tutorial, you learned how to determine the users head pose, which we used to control the POV settings of the playing YouTube video.

Combined with what we learned in the last tutorial, you should now be able to determine where on the screen the user is pointed at with the instance.pointer object as well as how the head is pointing at it with instance.head.rotation.

We still have a few properties to learn, including determining the users position in 3D space as well as determining their faces morph values (like, how smiley they are or how high/low their eyebrows are). Until then, here are some links to help you take things further:

Thanks for reading and have fun coding 👋

1) Handsfree.js - A web based Face Pointer 2) Controlling YouTube 360 videos handsfree with Handsfree.js 3) Puppeteering Emojis with face morphs through Handsfree.js 4) Face Painting with P5.js 5) How to start and stop videos from a distance with your hand ✋

OMG I love working on side projects 🎉 Currently focused on #100DaysofCode to put them together into a portfolio so that I can join a team as a frontend dev!

How to Set Up a React Project with Create React App

How to setup gatsby with TypeScript and ESLint + prettier

Oz Ramos
@checkboxoz
OMG I love working on side projects 🎉 Currently focused on #100DaysofCode to put them together into a portfolio so that I can join a team as a frontend dev!
location
Portland, OR
work_status
I'm looking for work!
joined
Jan 11, 2018
More from @checkboxoz
How I made Flappy Pose, Flappy Bird but where you flap with your arms
#javascript #computervision #game #tutorial
Instagram SparkAR "clone yourself" segmentation effect with Handsfree.js and p5.js
#tutorial #p5 #handsfreejs #computervision