Or: Why Computer Geeks Typically Leave the Words to the English Majors

Software engineers hold a revered status in society, creating games for our smart phones and professional tools for our dumb jobs, all the while making a pretty penny for their programs. They position themselves as visionaries, geniuses, and rock stars and they act as if their products are handed down from on high. Silicon Valley thinks it has the knowledge and the know-how to make the world a better place.

But you wouldn't know it looking at the names they choose for their products - some of them suck (Zune, Chumby, iMuffs).

A rose by any other name would smell as sweet (except crap weed). Or would it? Is Silicon Valley filled with omniscient techno-gods who will solve all our problems, or are they pompous nerds who need to read a book? Let's take a look into the names of well known technologies and tech companies and see where they got their origins.

Google Originally called BackRub (after the backlink technology used to determine search results), founders Sergey Brin and Larry Page recognized they needed a new name for their nascent search engine. They held a meeting, Someone pitched "googol" as a name, they liked it, someone misspelled "googol," and they arrived at (Google)[https://graphics.stanford.edu/~dk/google_name_origin.html].

"Google" is now a verb in the Oxford English Dictionary - could you imagine saying "Siri, backrub foot doctors near me?"

Bug The concept of "my program doesn't work in the way I intend it to" is named after a literal moth flew the Mark II computer at Harvard in 1947. 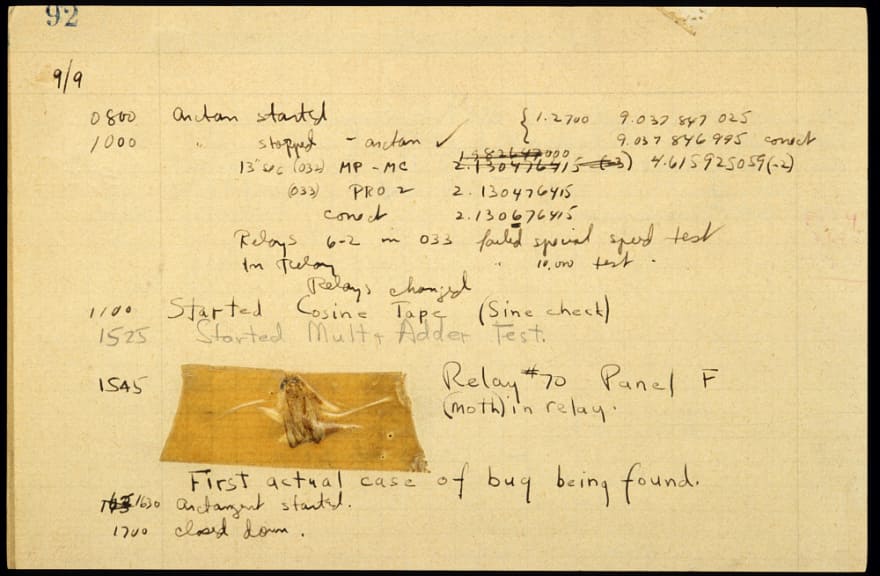 The first bug, or the reason why errors in your code aren't called "typefarts (courtesy of the Smithsonian National Museum of American History)

Java First called "Oak" after an oak tree outside of the founder's office, it was later named "Green" and then "Java" after some Java coffee in the office kitchen. Other name ideas included "stapler," "Mike," and "that She-Ra action figure dealie on Mike's desk."

Javascript From its humble beginnings as a programming language for browsers called Livescript, Netscape wanted to capture some of the hot marketing buzz of Java (which itself was named after the third object the founder saw).

Python Creator Guido van Rossum named after Monty Python's Flying Circus, a sketch show from the 70's. His next door neighbor made a programming language named "Brian" and caused some mix-up.

It's true. Go backrub it.