On 10/17/2021 I made a decision, and my decision was to turn a hobby into another profession, and that I would dedicate my free time to achieve this goal. In order to achieve this, I would need the full experience of developing a game. From start to end, that means, from programming to publication in stores.

Today, I`m very proud because I completed this goal. Blocknator is my first published game! And it’s available on Steam and Google Play!

Now, shall we talk about this experience?

Before starting the development I needed to take two steps. The first was to put a deadline to complete the development. So, I decided that this period would be 3 months, because my goal was to have the game done by the end of January. The second step was to define the scope of the game. What could I create in 3 months? All my ideas were too big for this period of time, so I decided to reimagine a classic game with new gameplay and, of course, new features.

Blocknator is a casual point-accumulating game. All you have to do is fit the pieces on the 3D board and as soon as you fill a floor the pieces are destroyed and you accumulate points. That simple! 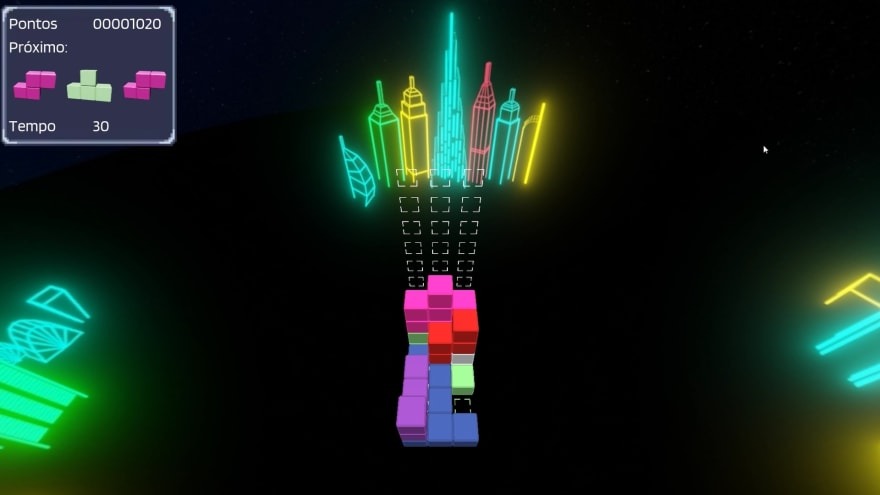 To organize ideas, features and activities I used the Kanban methodology within Trello. I created 6 columns (not necessarily in that order): bug fixes, art and design, code, translation and others, store setup, proof of concept and, of course, completed.

The initial idea had the pieces rotating in all axes, but there were pieces with more than 16 positions, which complicated the gameplay. After playing a lot, I decided that the best thing was to limit the rotation in two axes and that the ideal number of positions of a piece would be 8. Besides, I reused almost all the pieces from the classic and also created new pieces, they are: 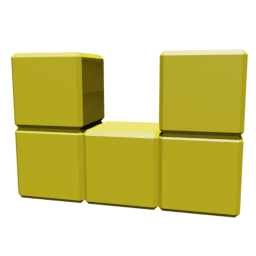 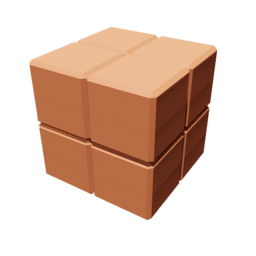 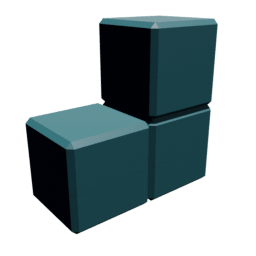 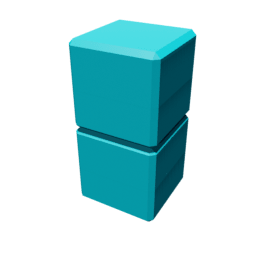 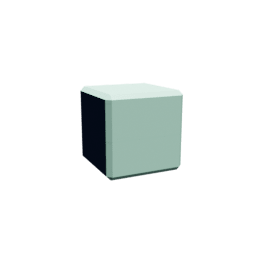 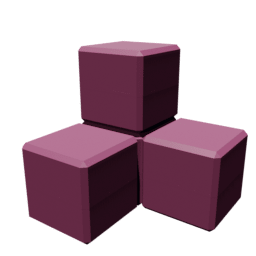 Some of the new pieces are rare within the game, once they present a harder fit. Another change was to allow the user place and rotate the piece before it lands on the board (in the classic game you rotate and place the piece at the same time it goes down). With that context in mind, imagine all these mechanics on a 3D board. Don’t you think it would be too complicated to execute?

About Blocknator Logo, I chose to hire a good designer to perform this work, since design is not one of my expertise skills.

For the GUI (Graphical user interface), sounds and music, instead of hiring people, I’ve visited several asset stores and I’ve bought the ones that matched with the style of my game. Some sounds I’ve made myself using Audacity.

After building the base components for the GUI, I created two branches in the project, one for mobile and another for PCs. That’s because on mobile, the current GUI wasn’t working well. The initial idea was to use the cell phone landscape, but there was a lot of wasted space in the screen and the board was small on it. So, I decided to change the board view and it was excellent in portrait (standing cell phone), but I ended up having a new problem: there were many command buttons, four for the directional pad, three for the camera, two for rotating the piece, one for placing the piece on the board and another for pause. However, this problem was quickly resolved by my wife, who proposed using the touchscreen to execute commands. This was an excellent idea that reduced the number of buttons to 6! 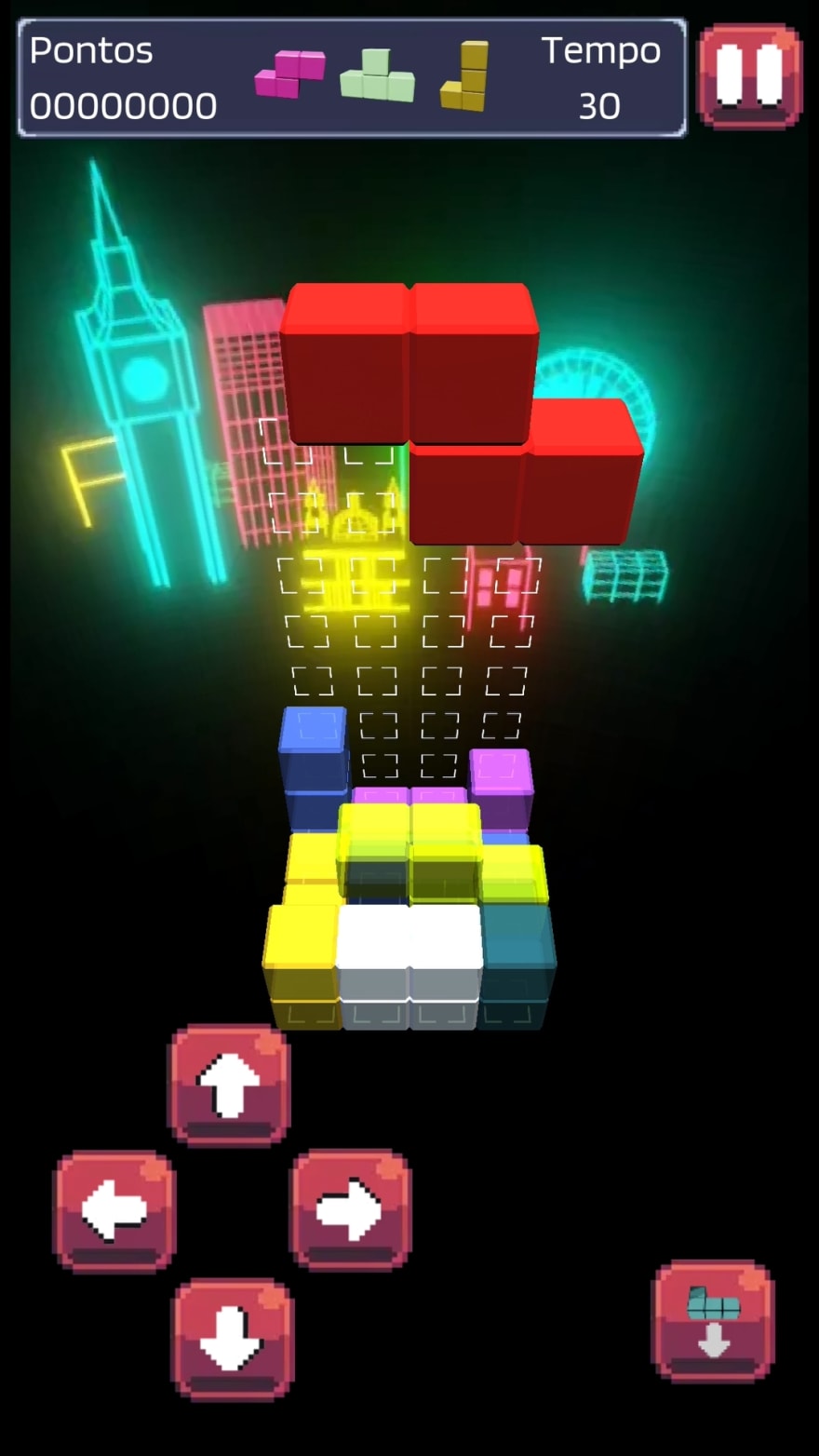 About translating into other languages

​​I really wanted that Blocknator had a good translation into English and Spanish. To achieve that, I asked my friends for recommendations, so I hired two translators for the game.

I ran a campaign on my personal Instagram to ask my friends to download and test the game with the objective to send me feedbacks (at this time the game was available on Google Play as Internal Test). Thanks again to everyone who contributed in this step, because without you I wouldn’t have been able to implement the improvements and fix some bugs.

I haven’t logged on my Google Play developer account for years, so it took me a while to get used to the console. Although it seems complicated, there is a wizard that helps you to fill in all the necessary fields. To complete the wizard, I had to create a website for the game and the “Privacy Terms”. Also, it’s possible to set different prices for each country, exclude devices and create test user email lists.

The publication process on Steam was new to me. It is necessary to pay 100 dollars to publish each game (even the free ones). In addition, after the first payment, it is necessary to fill in the details of a bank account and a tax form. Once you have the registration approved (it may take a few days) you can register your game. The game’s registration on Steam seemed less friendly to me, than the one on Google Play. Steam also has a wizard to help you, and there are several videos on Youtube about it.

After all these months of work, I can say that the decision I made last year to invest my free time in this new project have been pleasant and the experience I’m accumulating will drive me to invest on my new games. So, I invite you to be part of the Blocknator player community! By the way, your feedbacks will be very welcome and important for my constant evolution.

To support me share this article and, of course, you can buy my game in stores!

Thanks for coming this far! See you next time!

Working with data attributes in CSS

How to take care of your Health as a Developer

Once suspended, cesarpaulomp will not be able to comment or publish posts until their suspension is removed.

Once unsuspended, cesarpaulomp will be able to comment and publish posts again.

Once unpublished, all posts by cesarpaulomp will become hidden and only accessible to themselves.

If cesarpaulomp is not suspended, they can still re-publish their posts from their dashboard.

Once unpublished, this post will become invisible to the public and only accessible to Paulo Porto.

Thanks for keeping DEV Community 👩‍💻👨‍💻 safe. Here is what you can do to flag cesarpaulomp:

Unflagging cesarpaulomp will restore default visibility to their posts.