Swift packages are bundles of source files, binaries, and resources that you can reuse in your projects. They can also be seen as a tool, similar to CocoaPods and Carthage, for controlling the distribution of Swift code. It is integrated with Swift's build system to automatically download, compile, and link dependencies.

In this tutorial, we are going to learn:

Definition of some Key Terminologies Used

This first section of this tutorial explains how to use the Nimble Code Editor to create a swift package that alphabetically returns all the European nations together with their respective capitals. The tutorial's second part focuses on discovering how to link the Swift package we built with our ListControl project:

Step One: Create a new Swift Package with Nimble

As an alternative, you can accomplish the aforementioned using the keyboard shortcut Shift + Command + N. 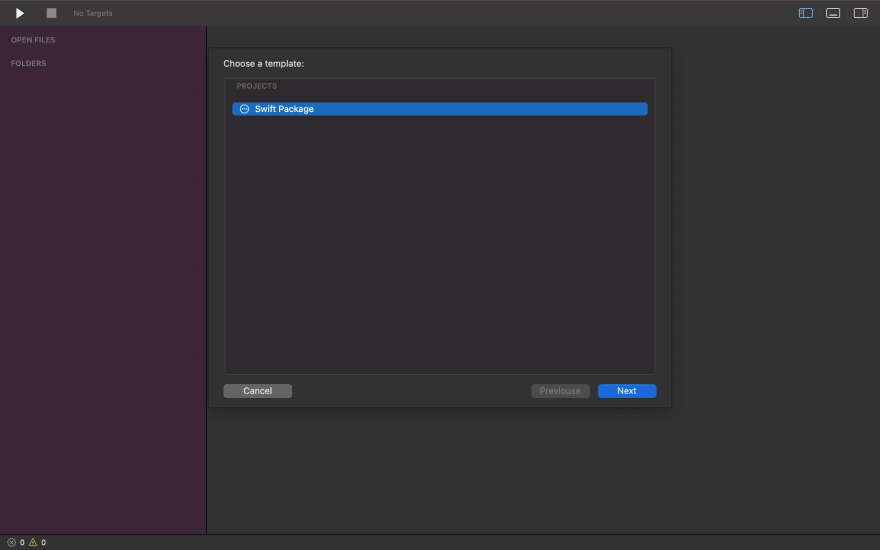 Type your package name, select your project folder location, then press the Create button to create the swift package folder - you are expected to do all of this after selecting the Next button of the Swift Package template screen. 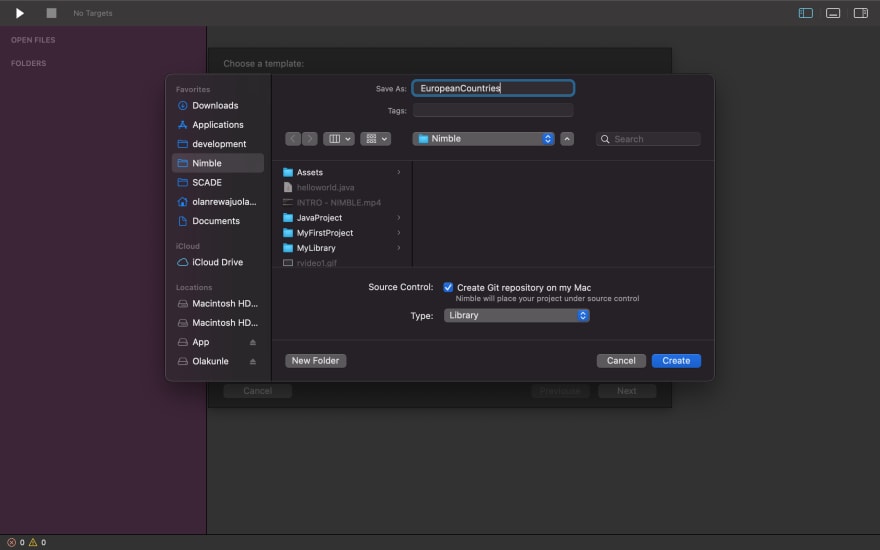 Next is to write/add the source code in our Swift package. Copy all the source files into the Sources\EuropeanCountries folder. If you'd like, you may delete the default Sources/EuropeanCountries.swift template file and replace it with our Country.swift file: 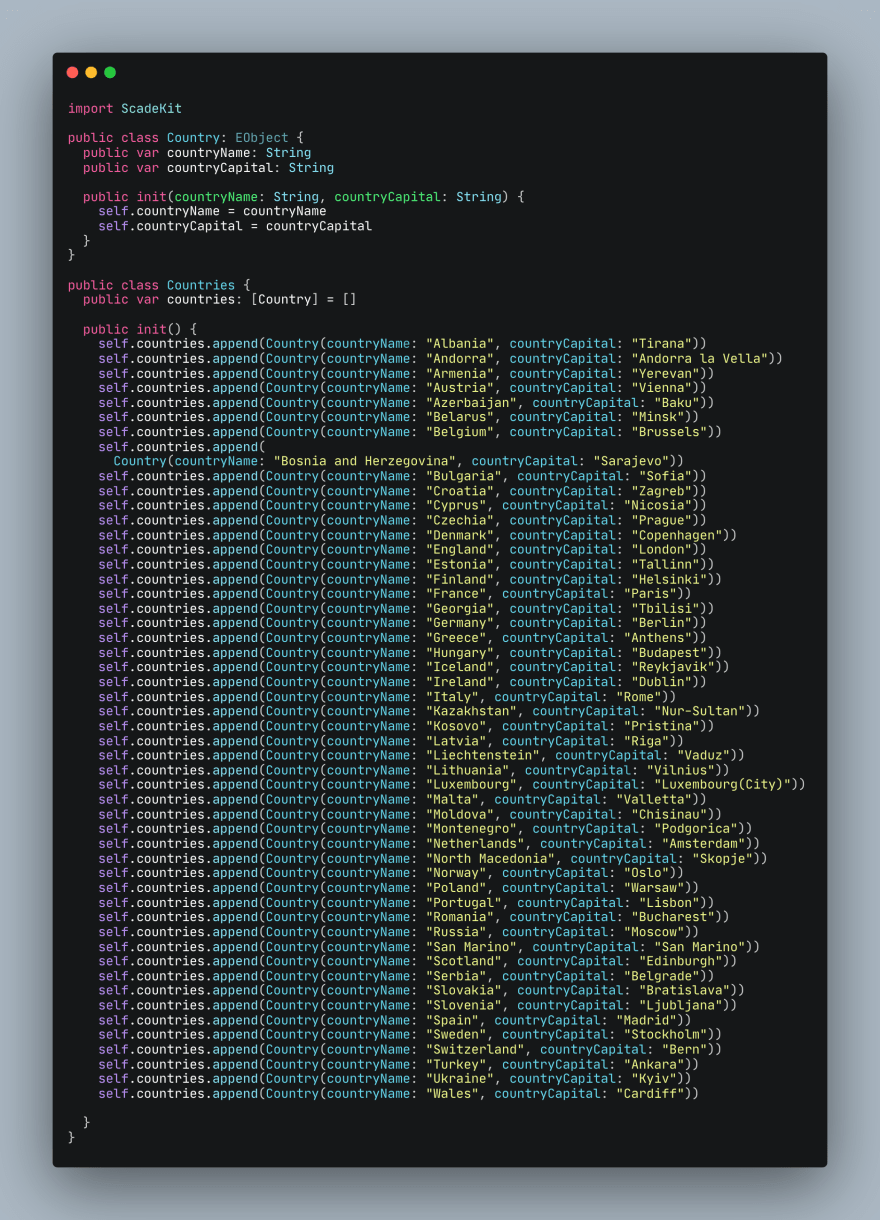 Copy all of your unit test files into the TestsEuropeanCountriesTests folder if you have any. 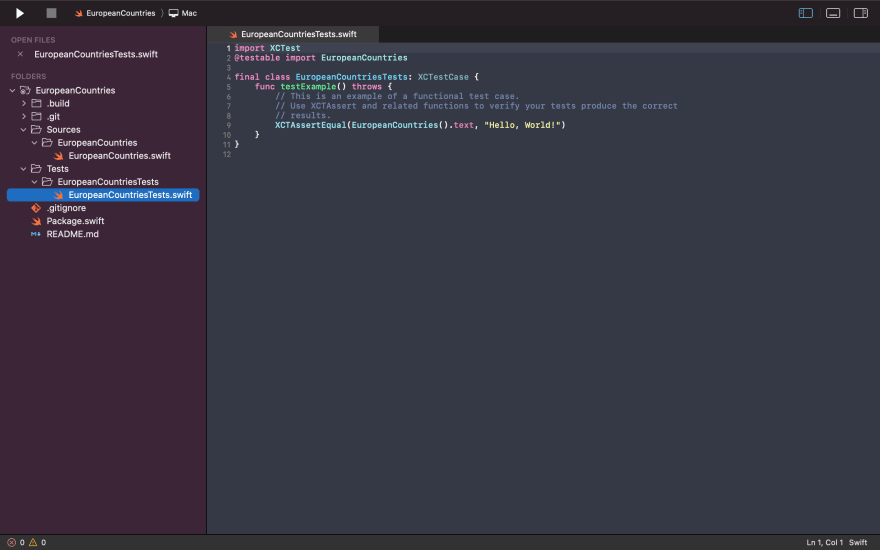 We completely deleted the Tests folder because we won't need unit tests for this tutorial. Recall that you must remove the .testTarget syntax from your package targets if you wish to delete your swift package Tests folder along with us. 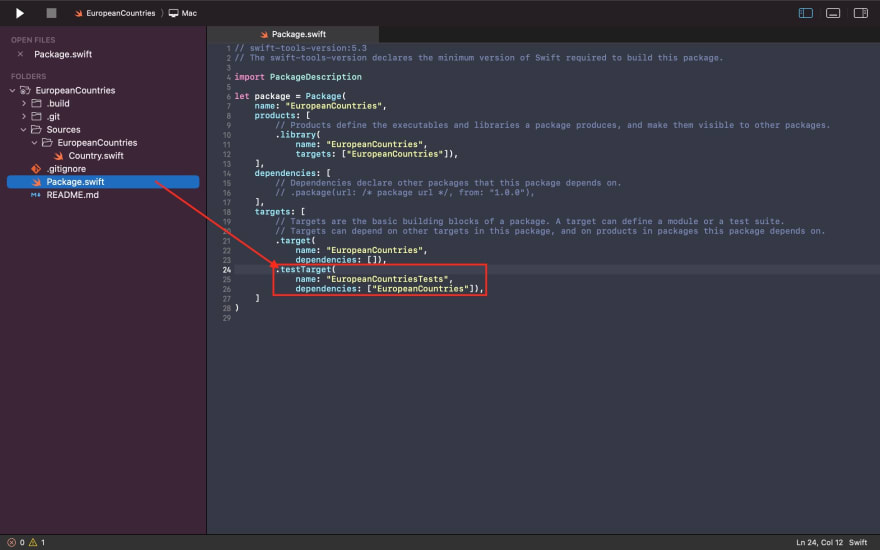 It's also advised that you keep your README.md file meaningfully updated. This makes it easier for other developers to use your Swift package: 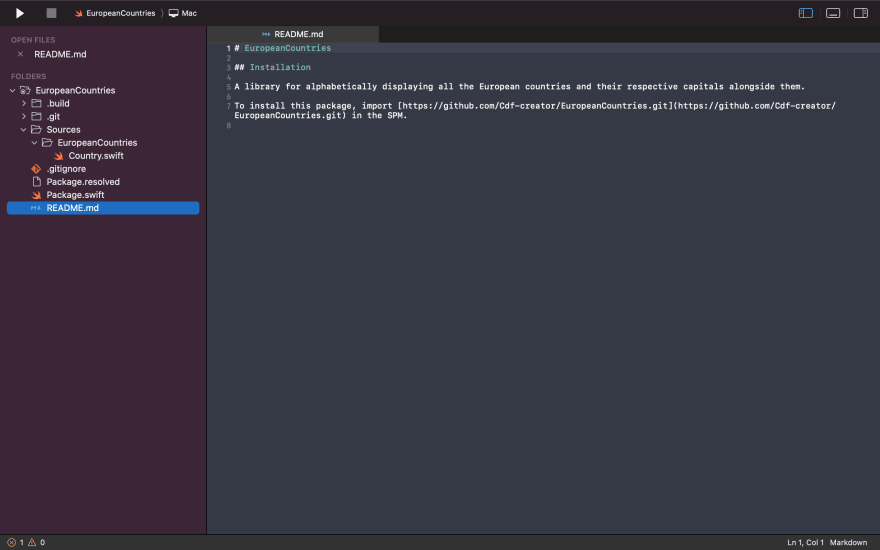 We implemented inheritance from EObject in this tutorial so that the Country class could be used as a binding in the ScadeKit widget. We also needed the ScadeExtensions library as a dependency using ScadeKit.

Note: If you also require the ScadeExtensions library as a dependency, you must add the ScadeKit information provided below to your SPM package manifest file. 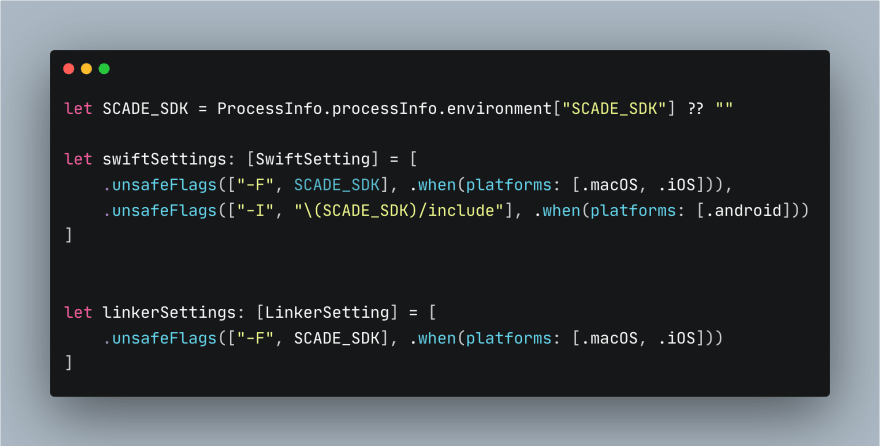 And also add this for target:

This tutorial Manifest file together with its minimum iOS Version and Dependency looks like this: 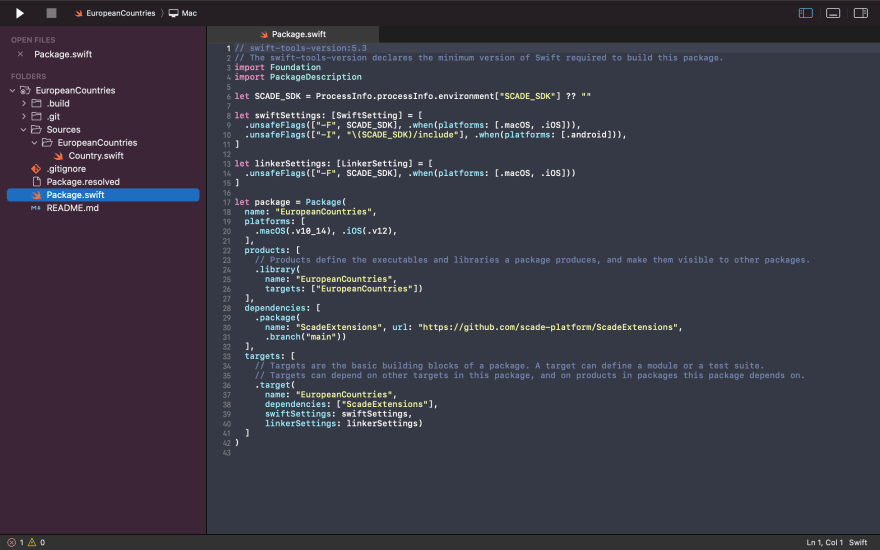 There is now just a step left before we can distribute our swift library. Just use the Terminal application to upload your SPM code to your GitHub repository. Developers will be able to access your library when they enter your SPM link.

Section 2 - Using a Package in a SCADE Project

Swift packages can be used in SCADE in two different ways. The SPM package we just created can be used locally in a project or uploaded to a personal Git repository. Both methods will be demonstrated for you in this tutorial section:

1. How to use Swift Package Locally

Open the Package.swift file of your SCADE project, under dependencies, add the path to where your SPM package is located locally in your machine via the .package(path: “/path/to/package”) syntax. Not only that, but you also need to list the name of your package among the targets. Once all of these are done, you have successfully added your package to your project, and can be imported and used! 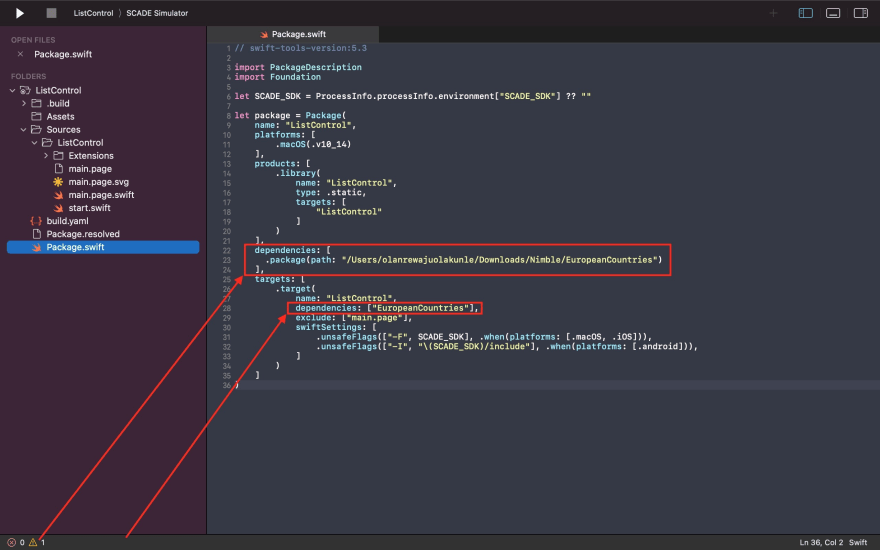 2. How to add Swift Package to your SCADE Project via Git Repository URL

Similar to the manual way described above, open the manifest file of your SCADE project and paste the GitHub repository URL for your SPM package under dependencies along with the package and branch name using the appropriate syntax. You must also put your package name as a reference under the target panel. 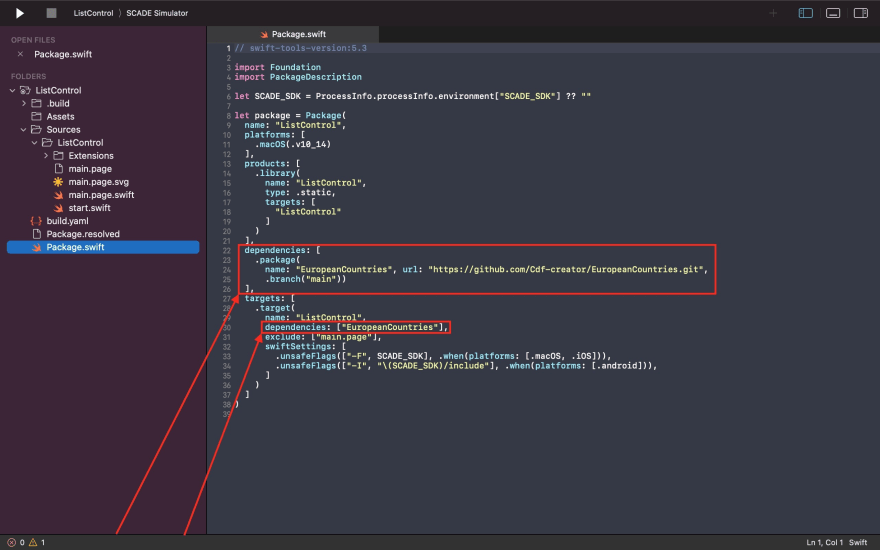 This goes for both methods explained above - import your package's product as a Swift module to utilize its functionality in your SCADE project.

Both classes (Country and Countries) in the following code snippet import the EuropeanCountries module of our Swift package and make use of its features: 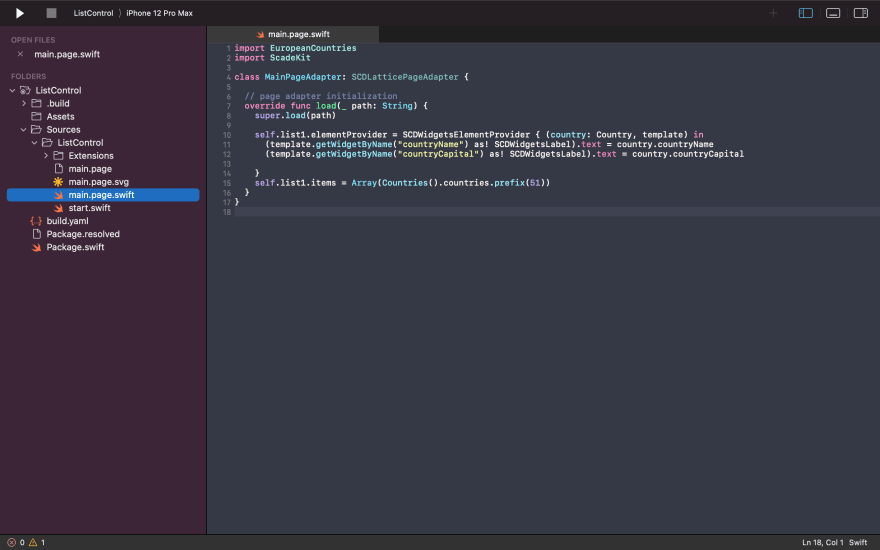 The Package.resolved file is located in your project directory as a standalone file. 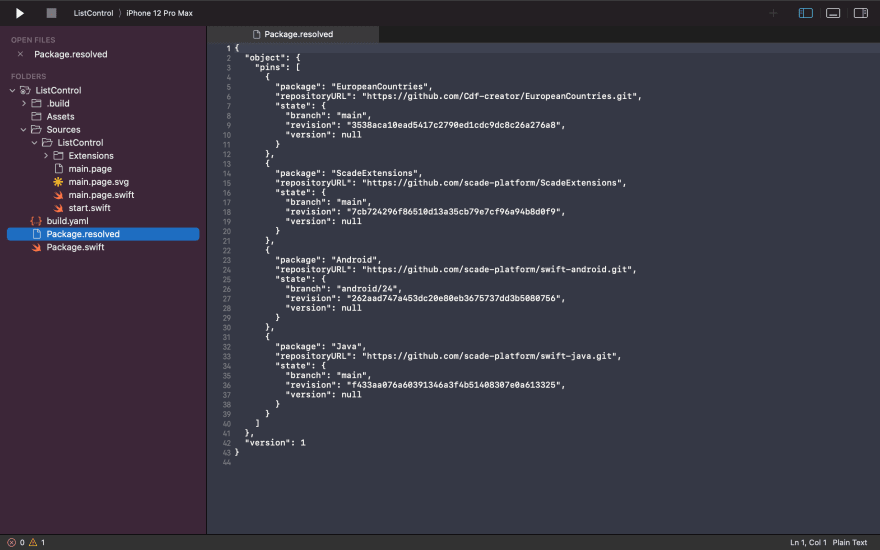 This tutorial has taught us how to create SPM packages using the Nimble Code Editor and how to use such packages for cross-platform native app projects. If you have any questions, kindly remark below. Thanks for reading!

Creating a simple browser for iOS

Get Started With JSConstraints - Programmatic Swift Constraints for Beginners

Using Realm Flexible Sync in Your App – an iOS Tutorial

Launch a node script at boot on MacOs

Thanks for keeping DEV Community 👩‍💻👨‍💻 safe. Here is what you can do to flag cdfcreator: