Hermes is now available on iOS as of React Native 0.64 – the latest version of React Native comes with support for the Hermes engine on iOS. We describe the full process of bringing Hermes to iOS in a series of articles:

While the first two provide detailed information about Hermes and its performance, respectively, the last ones offer practical guidance on Hermes implementation.

This article is a high-level overview of Hermes on iOS, including the benchmarks and results of running Hermes in production.

Let’s take a closer look at Hermes performance: should you choose it in favor of JSC on iOS as well? Is it actually faster? What kind of improvements (if any) can you expect? We are going to address all these questions so read on to find out how things are.

We decided to use a Mattermost mobile application as an environment for our profiling. It is an open source React Native mobile application. Thanks to its advanced interactions and extensive functionality, it represents a real world application that we all might be building one day.

On top of that, it was used by Facebook to measure Hermes performance on Android. This will be a good reference to compare the scale of improvements with Android itself.

We measured the following three components:

Note: To better visualize the TTI difference, we have a) recorded and included a side-by-side breakdown of an application launching with both Hermes enabled and disabled and b) performed that test on a different set of Apple devices, from iPhone 12 mini, iPhone X to iPhone 6 Plus. 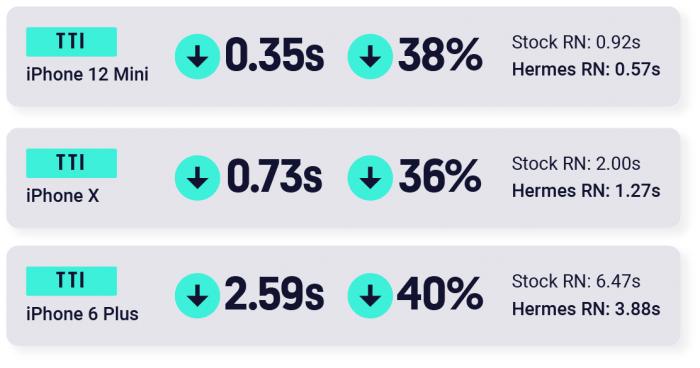 We measured the time for the app to become usable. Everything between pressing the app icon and seeing the first screen rendered was measured multiple times to get the final results.

We can see that mobile applications with Hermes launch faster than a regular React Native app on all tested devices.

The difference is least significant on the latest iPhone 12 family that is powered by A14 Bionic. We can see it grows as we run the test suite on older devices. For example, on the iPhone 6 Plus (that I remember buying a brand new not so while ago), it is 2.5s!

If you are not sure whether these numbers make a difference, take a look at the side-by-side video recording we have done on each of these devices. Fun fact, while doing it myself, I have learnt that I am able to notice half a second difference!

On iPhone 12 with the enabled Hermes engine the average memory usage for the Mattermost application is around 178mb. In an application without Hermes memory, the same actions use around 216mb. Apparently, there is 38mb improvement in memory usage. For such an application – an application that displays loads of data – this is a great change.

On iPhone 12, the application with Hermes engine included was 2 megabytes larger in size overall. That is not a surprise – JSC comes built-in with every iOS version and there is no need to ship it separately. Besides including the Hermes engine itself, we’re also generating a bytecode bundle which contributes to it.

I think this is really good news – 2 megabytes is not much and it will have less of an impact the larger your codebase is.

It’s been really fun playing around with Hermes on iOS with React Native 0.64 and testing it out on Mattermost example. Unless there is something stopping you from upgrading to the latest release, I highly recommend trying it out. The TTI improvements alone are remarkable – your users will definitely enjoy your application launching in a blink of an eye!