According to uncle bob comments should be avoided at all costs. Well written code should written in a way that is easy for other developers to understand. If developers follow the rules of writing clean methods as describe in Part 2 Methods avoiding comments makes even more sense.

Developers sometimes write logic and try to explain the code through comments. These comments in most cases are not necessary as displayed in the code bellow.

The code above in both cases has the same responsibility. The second case is a much more cleaner approach that doesn't need a comment to explain its purpose. Comments can also become obsolete if programmer's don't update them as the code evolves.

In some cases it can be useful to create comments, but it is important to keep in mind that no comment is always better than having comments. Analyze the following code:

The code above has an example of middleware configuration of the open source job scheduling system library named quartz. It uses cron to define schedules and in this case it would make sense to add a comment to interpret the schedule.

Many times I run into code with excessive comments. Programmers might think the code looks elegant with these comments, however they are redundant and not necessary. The code bellow has an example of excessive comments:

Regions in C# are sometimes used inside a method to "Improve Code Readability". Regions inside methods actually increases the size of the method and should be avoided at all costs. Regions could be used outside of methods to organize code, but that should be avoided too. In some cases where classes contains hundreds or thousands of lines of code it could make sense to have regions as shown in the following figure: 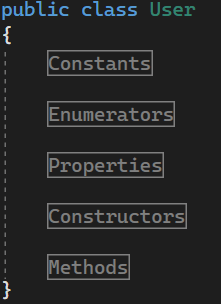 There are many other examples of comments that should be avoided not explored here. The main idea that you should be aware if you got to this point is to always avoid commenting code whenever possible. I find that having a concise external documentation about the system, requirements and architecture can also avoid many unnecessary comments in the code.

Once suspended, caiocesar will not be able to comment or publish posts until their suspension is removed.

Once unsuspended, caiocesar will be able to comment and publish posts again.

Once unpublished, all posts by caiocesar will become hidden and only accessible to themselves.

If caiocesar is not suspended, they can still re-publish their posts from their dashboard.