I've been programming for... a long time. I've been a writer for... even longer. So you might think that I've been blogging for decades. But the simple fact is that I didn't write my first blog until February of this year (2020) - right here on Dev.to.

Since I joined this site, I've noticed multiple articles about the process of dev/tech blogging itself. Now that I've cranked out 50 of these suckers (this is actually my 51st blog), I wanted to share a few insights.

Since February, I believe that I've been fairly prolific on this site. I'm certainly not claiming that I've made (anywhere near) the most posts. Nor that I've published (anywhere near) the most words. But I'm fairly verbose. And I assume that, if we could do some kinda statistical analysis of all the Dev.to bloggers since February, I'd probably be in the top... 10%? Maybe even the top 5%??

Not only have I cranked out 50 posts, but most of those posts have been fairly "beefy" in terms of content. To quantify this, if we take Dev.to's "X min read" metric into account, I've apparently written almost 500 minutes of reading material since I first started. So, if nothing else, that makes me a... talkative chap, no??

So what do you "get" for publishing 50 posts, consisting of almost 500 minutes of reading material, in a half year's time?? Well, these are my "metrics" up to this point:

(If you're not familiar with the Dev.to model, a "reaction" is essentially anyone who "likes" or "unicorns" or "reading list"s your article.)

And what did I "pay" for this return?? Well, this is completely subjective, because I have not tracked my time while I'm writing these posts, but I honestly believe that I've spent an average of about two hours writing each individual post. So if we accept those numbers, then the "returns" above were generated over 100 hours of effort.

I won't lie. I think Dev.to is pretty f**king cool. I appreciate the direction that's communicated (explicitly and implicitly) by their founders. I enjoy the "critical mass" of users they seem to have accumulated. I respect the fact that Dev.to seems to have become a "homepage" for many associated with the dev arts.

So I can't really say anything bad about Dev.to (even if I wanted to). Kudos to them for creating an epic forum for "all things dev".

But let's be honest about what Dev.to really is. It seems to have become (as I stated above), something of a "homepage" for many devs. This means that, if you write a great article today on Dev.to, it could possibly "blow up" in popularity over the next day - or two, or three - and then... it will slide back "into the ether" of countless dev articles that may-or-may-not ever be read again.

Is that a knock on Dev.to??? Of course not. It's a simple acknowledgment of the fact that today, in the 2020s, it's pretty darn difficult to write any article that will "hit" with most devs for more than a week or two.

So I say this fully in Dev.to's favor: If you go out and just start publishing your own standalone blog, and even if you write The Next Great Programming Post, there's an excellent chance that your post will be seen by... dozens of people before it fades into obscurity. If you put that same post on Dev.to, it will still fade into obscurity. But that could be after several hundred - or even, several thousand - people have read your post. So there's a definite value in Dev.to - because it provides a certain "built-in" audience.

To some extent, Dev.to is a churn engine. To be absolutely clear, that's not necessarily a bad thing. It's just an acknowledgment that Dev.to will reward the "new". And it will do little to highlight the "old".

What does this mean?? Well... let me explain.

Maybe you think that my list of 4,224 followers sounds impressive. Maybe you even think it means that I write "great" content. But the simple fact is that my follower-count is almost-entirely a product of the fact that I write frequent content.

You see, Dev.to still has a healthy population of "new" devs that are signing up - every day. And when they sign up, the algorithm will try to match you with "like minded" writers. But I've noticed that this algorithm is massively weighted toward those who have written something recently.

To be absolutely clear, I'm not complaining about this algorithm. In fact, I think it makes a ton of sense. But, in a practical sense, it means that, those authors who've been writing stuff recently get auto-suggested as "follows" for the new members.

On a practical level, this means that I get a bunch of new "subscribers" any time I write new content. Does that mean I've "connected" with these so-called "readers" on any visceral level??? Probably not. But it means that, as long as I keep cranking out new content, I'll keep snagging new "subscribers".

But it's an honest acknowledgment of the fact that Dev.to's process is - like almost any other web-based system - designed to drive a constant stream of new "think pieces".

You might believe that, if you keep writing a bunch of great "new" content, you'll garner ever-more views for an ever-greater audience of followers. But... my experience says otherwise. Specifically, these are my views-by-date: 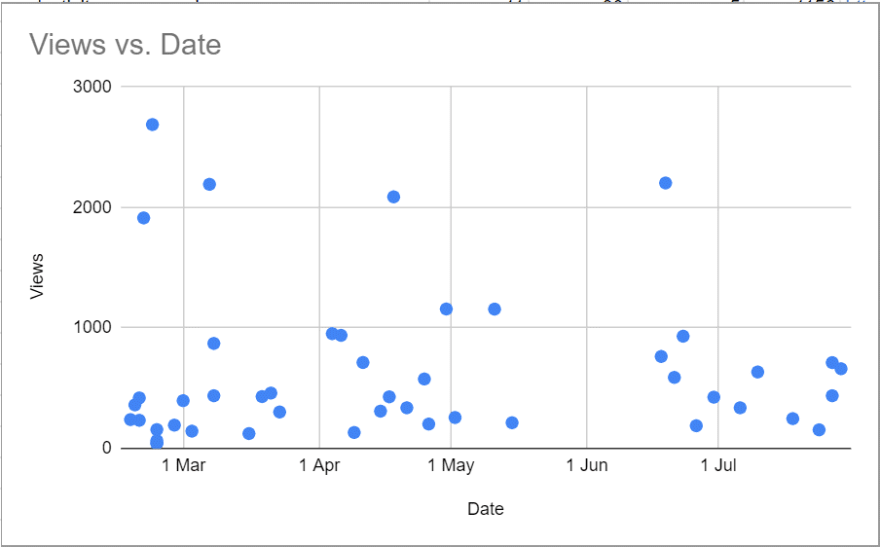 Notice that my greatest-viewed post was very early in my blogging "career" - way back in February. Since then, I've had "hits" that occurred in March, and April, and June. But the simple fact is that my "popularity" has not been some uninterrupted march from obscurity-to-popularity. In fact, once I achieved a "basic" level of Dev.to popularity - it seems that most of my posts have fallen into a band between 250 views and 1,000 views. 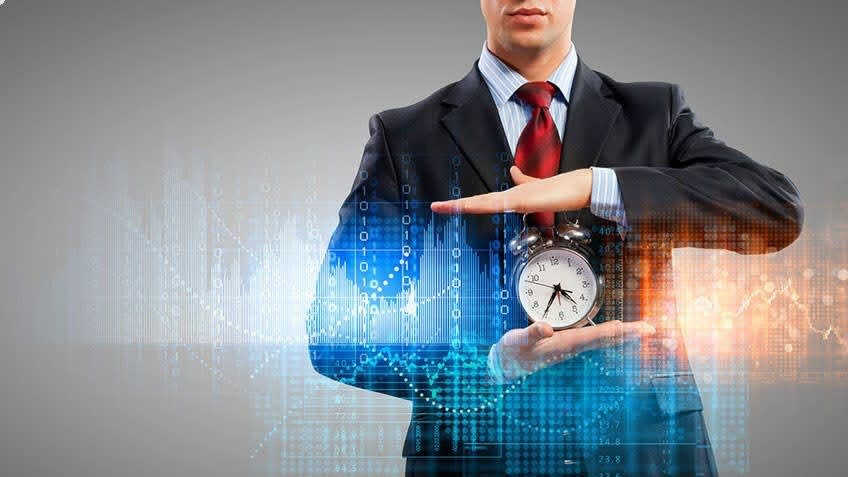 I was pretty surprised by this.

I'm... verbose. I admit this. I'm prone to go off... endlessly, when I have the chance. So I'm accustomed to people telling me, "Your content is good - but it's just too long."

But when I examined the metrics from my posts, I was amazed to find that:

There was no relation between the length of my posts, and the number of people who read them.

Some of my earliest posts were my longest. And I thereafter tried to craft posts that were (moderately) shorter. But in the final analysis, I found that that there was basically no correlation between the length of my posts, and their popularity.

What It's All About?

My first website was on Geocities. My greybeard is well earned. My point is that... I've probably been doing "this" longer than you have. So standard "metrics" don't apply so much to me.

You see... I'm not really so concerned with "numbers". Every word I write is, more-or-less, written for me.

So why am I doing this? Why did I suddenly start spitting out blogs six months ago??

Well... the simple answer is this:

I won't deign to tell you why you should write (or not write) blog posts. Writing is one of the most sensitive, personal endeavors that anyone can undertake. But I can explain - with absolute certainty - why I have decided to start blogging.

In fact, when a new dev joined our team a few months ago, we were talking about multiple dev issues. And, over the course of weeks, I ended up sending him multiple links to blogs I'd already written here on Dev.to. And, of course, at some point, he basically said, "What the hell??? I feel like I'm in some kinda pre-ordained 'dev course' in which you're just gonna keep sending me new, pre-written diatribes."

Of course, I told him that I certainly have NOT written blogs for every issue we might face. But for many of the "common" dev issues that we've run into - I have, indeed, already written long diatribes about my exact feelings on these issues.

And you know what??? Having these creeds already printed out feels... pretty good.

How to use POM in software testing

My March & April In Code

10 Advices For Every Aspiring Web Developer