After prepared the dependencies adapter you need to run it: at the end of the execution you will find in the destination folder a system executable (a .cmd file under windows and a .sh file under unix) with which it will be possible to test the extracted dependencies: 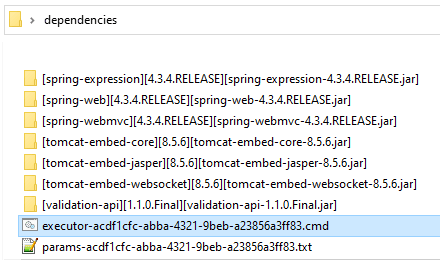 We learned how to adapt a Java application to Java 9 and later versions and you can download/clone the tutorial shared here on GitHub: to make it works you need:

For further assistance you can write a comment below or you can subscribe to the forum and then ask in the topic "How to do?" or you can ask on Stack Overflow.

Special thanks to Jim Jerald Burton for maintaining the source code of this tutorial.

Introduction to Babel,ES and npm

Once suspended, burningwave will not be able to comment or publish posts until their suspension is removed.

Once unsuspended, burningwave will be able to comment and publish posts again.

Once unpublished, all posts by burningwave will become hidden and only accessible to themselves.

If burningwave is not suspended, they can still re-publish their posts from their dashboard.

Once unpublished, this post will become invisible to the public and only accessible to Roberto Gentili.

Thanks for keeping DEV Community 👩‍💻👨‍💻 safe. Here is what you can do to flag burningwave:

Unflagging burningwave will restore default visibility to their posts.