Not many developers can do without stackoverflow.com. It is undoubtedly the largest online community for developers on the planet.

I’ve gained about 600 reputation for 2 months and wanted to know how I was successful compared to others. Then I found data.stackexchange.com and got surprised that I can run SQL queries to stackoverflow database directly. There were so many interesting queries and I got to know everything that I always wanted to know.

User with the highest accept rate of answers

Prix has posted 396 answers in total and got all of them accepted. 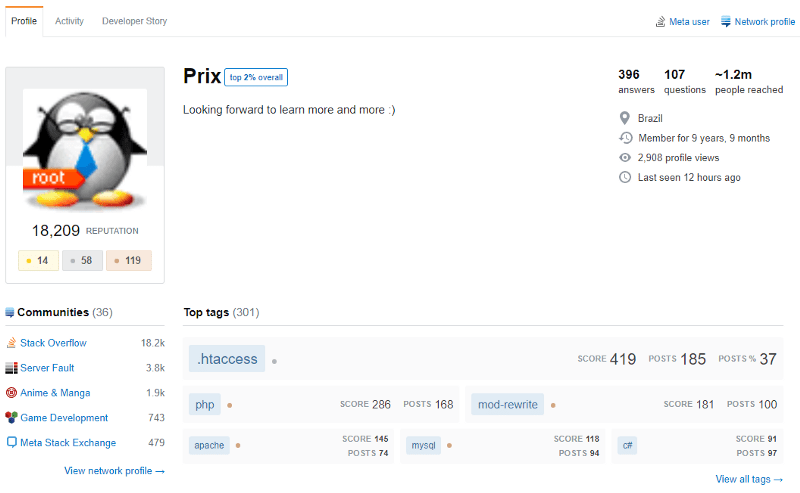 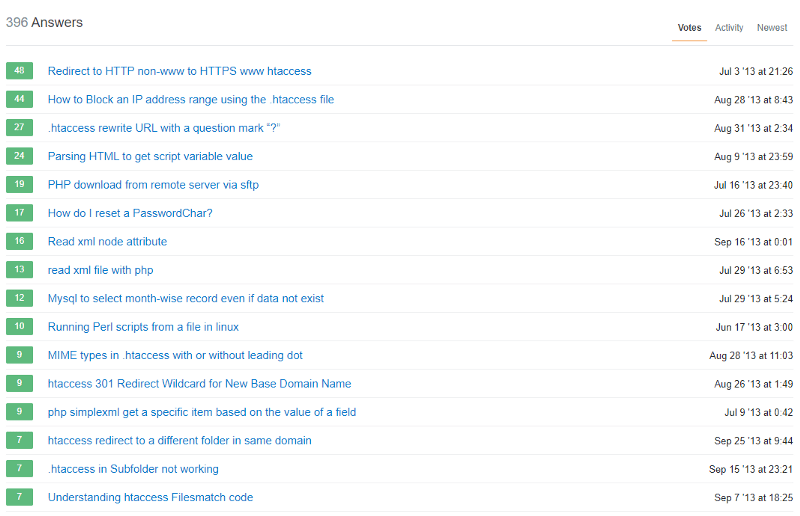 Well done, Prix! There are some legends who got thousands of accepted answers but you are the only one who has got all of them accepted.

The next one is a natural question:

User with the lowest accept rate of answers

rashedcs has answered 180+ questions but he has zero accepted answer by International Women’s Day, 2020! 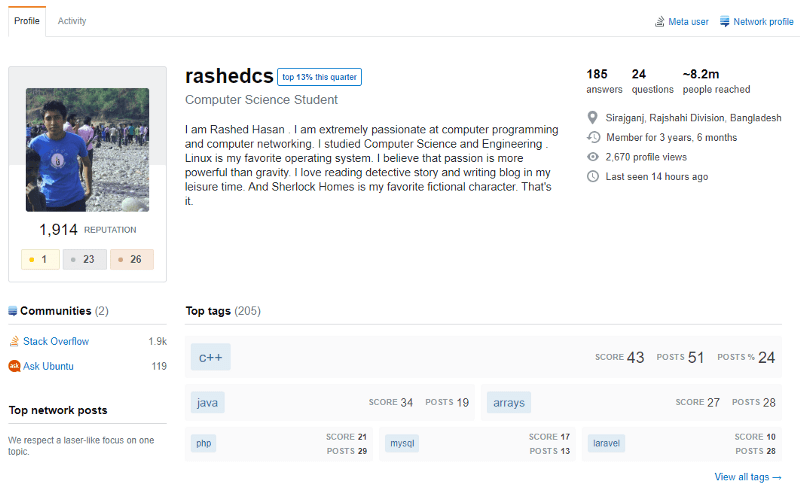 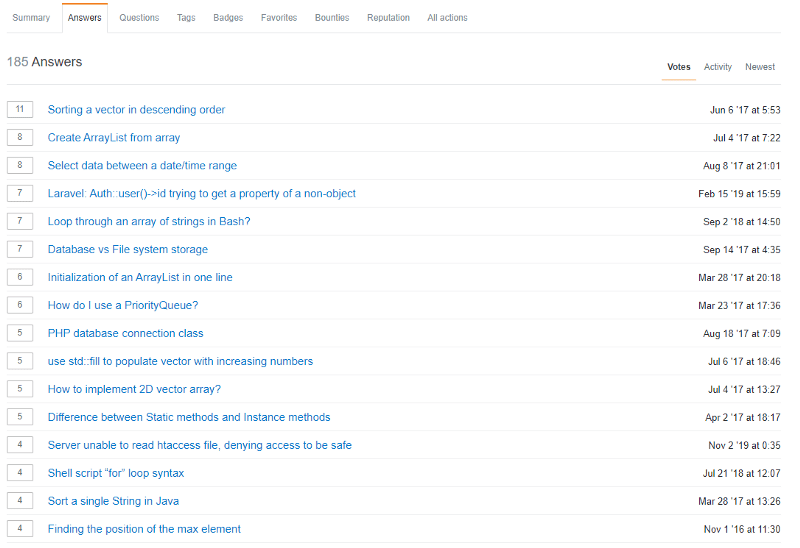 Gosh, that was even harder, don’t you think? Well done goes to you too, rashdecs!

I have more than 80 posts but my reputation is only 938. But some guys can get tens of thousands of reputation scores (gold badge included) just for only one post in their whole lifetime in stackoverflow.

User with only one answer in stackoverflow 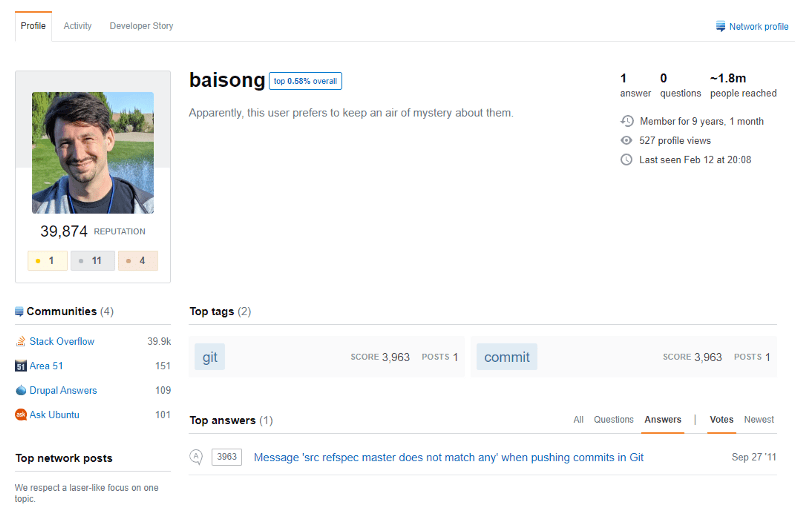 40k reputation for one answer looks great, but it would be much better if you could do something similar with only one question.

User with only one question in stackoverflow 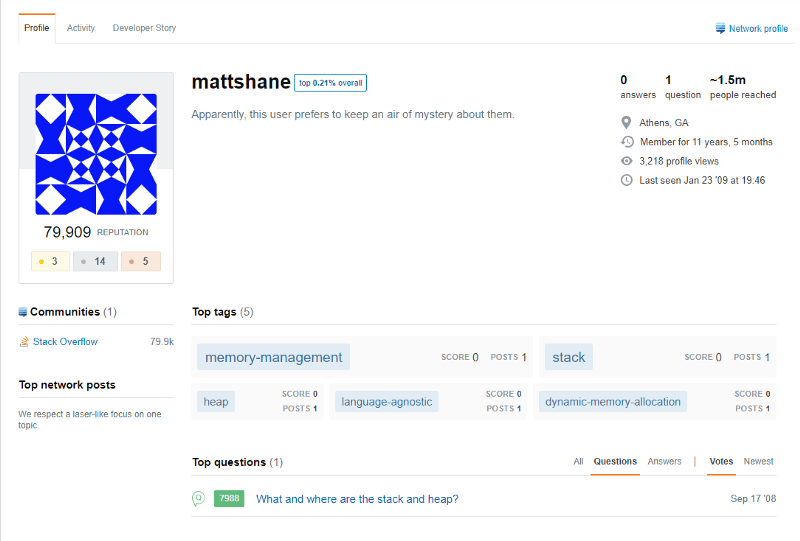 His question What and where are the stack and heap? not only helped countless developers and students (and experts refreshing their memories) but also gave him nearly 80k reputation. And it hasn’t lost its value until now:

Gordon Linoff, one of the legendary users in stackoverflow, hasn’t asked any single question and answered 65,482 times. He is in the third position in all-time league(Mine is 214,703). But he almost always wins every league other than that. 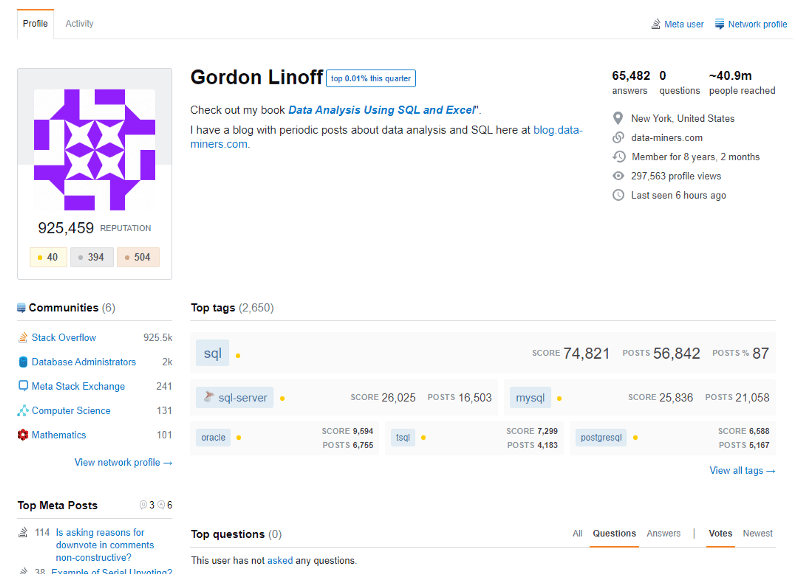 Tim, just a cuorious self learner as stated by himself, has asked 1,186 questions but hasn’t answered any question. 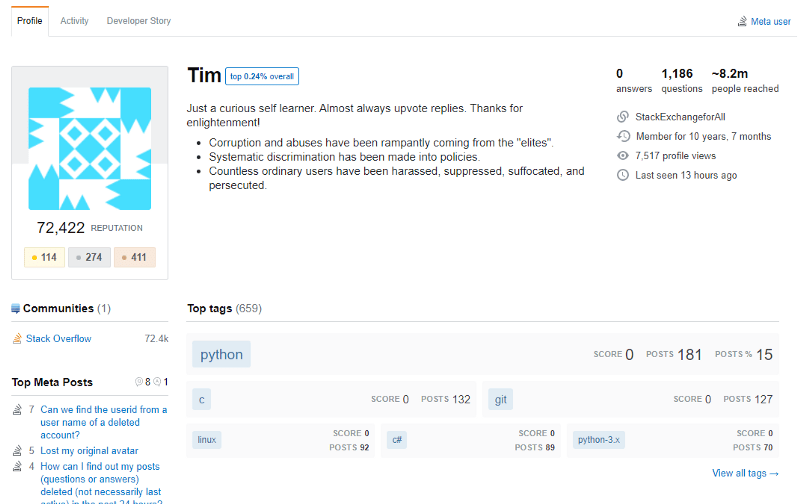 Best upvoter who never downvotes others

user998692, his name may look unfriendly but he has been the most friendly and generous among all 10M users in stackoverflow. He upvoted for 107,469 times. In other words, he contributed over a million reputation to others. 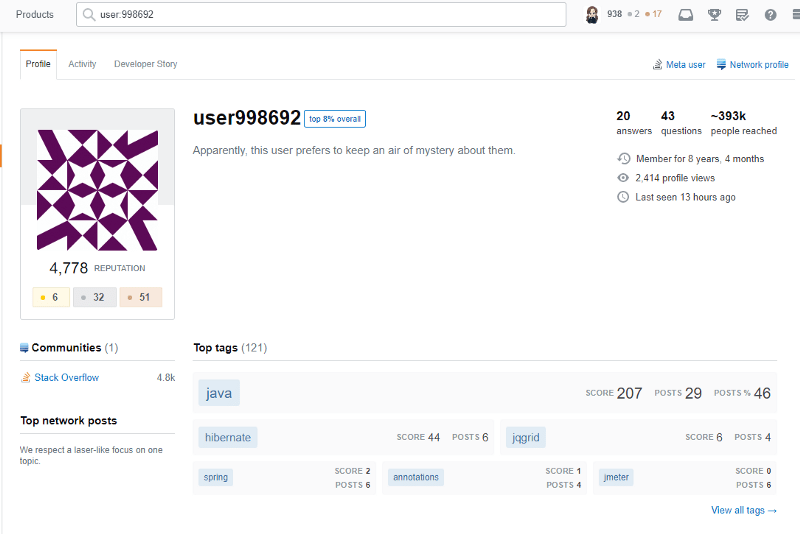 His is the biggest upvote count in stackoverflow. Besides, he never downvoted others. 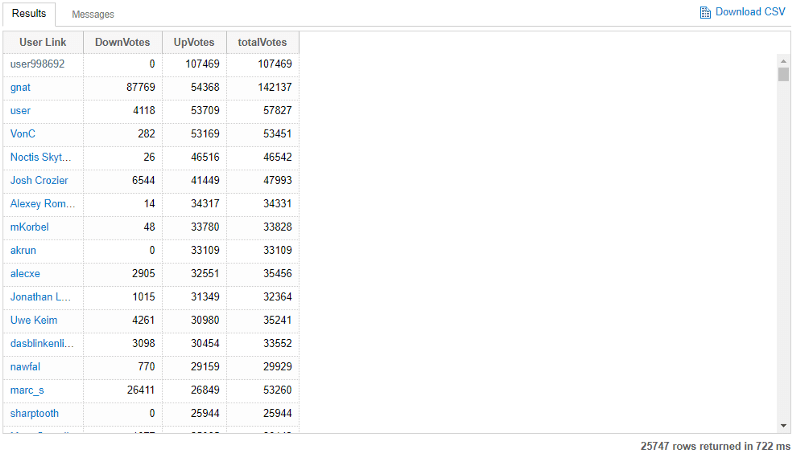 Remember his username and favorite tags, and try to answer his questions as soon as possible for more reputation(OMG, VonC is listed here too). Since he regularly upvotes 35 times a day, there will be much chance for you to get his upvote.

Top downvoter with the most downvote percentage

If a user can spam upvotes for 100K times without a problem, why not downvote?

Enzokie has some voting philosophy and acquiring his upvote is nearly impossible. He upvoted for 2 times and downvoted for 20,402 times. 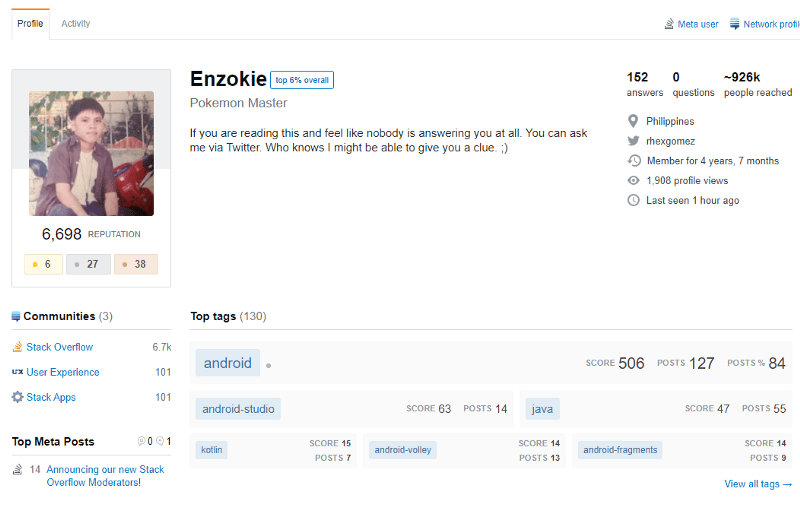 Seems like most android questions look silly to him. Some guy was trying to calculate evil ratio of users by dividing upvote count by downvotes. Enzokie’s evil ratio was whopping 1,020,100.00 %. If he hadn’t upvoted for 2 times (by mistake?), his query wouldn’t work. I think he is trying to prevent stackoverflow from dumb-or-just-google-away-question-overflow by downvoting 12 ~ 13 times a day.

The facts about these users sound funny but they are some of the best contributors to stackoverflow. They are Jon Skeets in their own way. Stack Overflow is definitely most helpful and fun to get around for developers.

How to integrate Datadog Agent in ECS Fargate

bravemaster619
Have been a fullstack web developer for 5+ years. Top 10% Javascript & React answerer in Stack Overflow.
I'm working on an Expense Tracking App and I need your feedback
#discuss #webdev #javascript #productivity
Which Frontend Framework Would You Use For an Ecommerce Storefront?
#discuss #javascript #webdev #opensource
What makes for a good meeting?
#discuss #productivity #management