Scenario: you want to define a polygonal area in your scene and pick random locations on it, for example to have a NPC roam within. There's no one-shot solution for this that I'm aware of, but there's at least one method for picking uniform random points within a triangle. Since polygons can be triangulated, we can apply the triangle formula in the context of the polygon.

The code is here, but since it's really just about three non-glue scripts with very few functions, I recommend writing your own as you learn the ideas from the article.

where r1 and r2 are uniformly distributed random numbers in [0, 1] i.e. as returned by UnityEngine.Random.Range(0f, 1f). 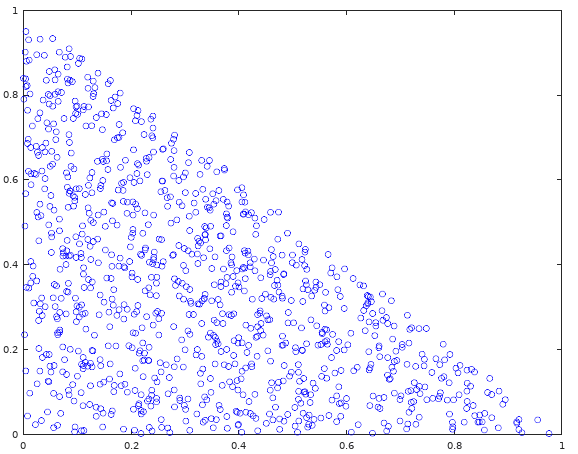 We can apply the formula in the context of any polygonal shape if said shape is triangulated. For the triangulation process you can use an existing library that already implements Delaunay triangulations, such as Triangle.net, or write your own (it's not trivial, in case you're not sure you've got the time to spend).

I gave Triangle.net a shot and it appeared to work just fine for what I threw at it. The official distribution should work fine now that Unity supports .NET 4.6 but to avoid any kind of hassle I used this fork which was already confirmed to work with Unity.

Before we start throwing triangles around though, we need a polygon.

Setting Up the Polygon

An Area script can be defined, which will have a List<Vector3> of vertices that describe the polygonal shape.

We want to be able to edit this polygon in the scene view, so a custom editor for the Area component needs to be written.

This tutorial that deals with Bezier curves, or at least the first quarter of it, teaches all that you need to get this done, so if you're not sure how to proceed, give it a shot. In short, we're not doing much more than drawing lines between points and using handles to move said points around.

This is the end result for me (note that here the polygon is already being triangulated):

In the end, you want the Area script to expose a PickRandomLocation function or similar, allowing calls like:

With a set of vertices that describe the polygon, we can ask Triangle.Net to do some triangulation for us.

This is my function that calls into Triangle.Net:

The Vector2s given as input are the Vector3 vertices of the Area, with the z coordinate taking the place of y. In other words, area.Vertices.Select(v => new Vector2(v.x, v.z)).

Polygon is a Triangle.Net type, as are Contour and Vertex. We turn a Vector2 into a Vertex via an extension method called ToVertex that does nothing more than new Vertex(vec2.x, vec2.y). Then, we build a Contour out of our vertices and add it to the Polygon.

With the Polygon set up, all that's left is to call Triangulate() on it, which gives us back an IMesh object, from which we only need the collection of Triangle.

With the collection of triangles calculated, we can pick one to apply the random point formula on. We want the random positions to be picked as uniformly as possible, so simply choosing one of the triangles at random won't do: 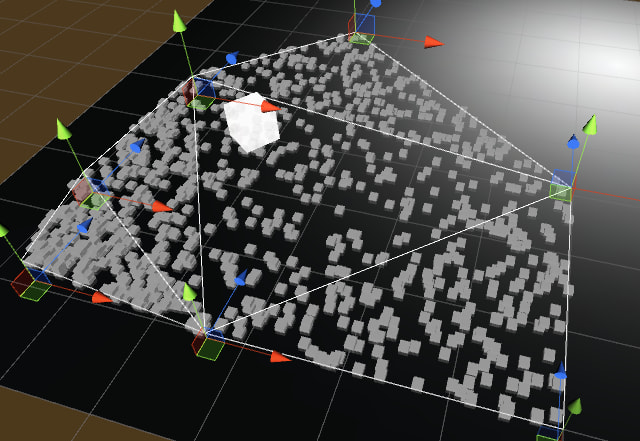 Instead we'll introduce some bias, so larger (by area) triangles become proportionately more likely to be selected. 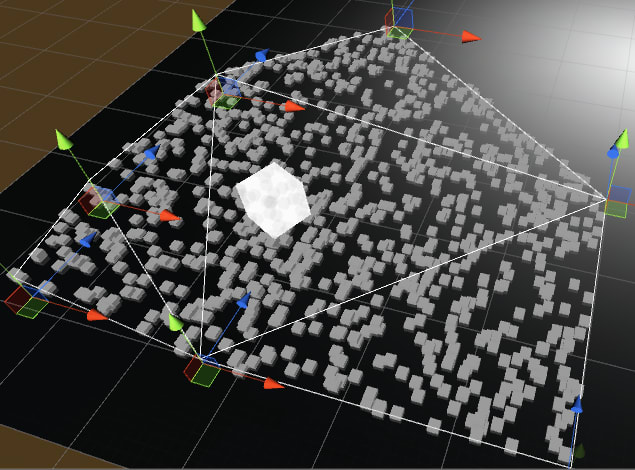 With a Triangle having been chosen, all that's left is to apply the aforementioned formula:

The result is our random position within the polygon describing the Area.

Once you have the random 2D coordinates generated, (x, z), you can perform a raycast from (x, HighEnoughY, z) downwards. Once you hit the terrain, get your final position by taking hitPoint.y as your random point's y coordinate.

Remember to set your terrain on its own layer if it's not on one already, and make your raycast only hit the terrain layer via the layer mask argument. This will improve performance and reduce the chance that your character receives the top of a giant orc's head as destination.

How do I add holes within the polygon? 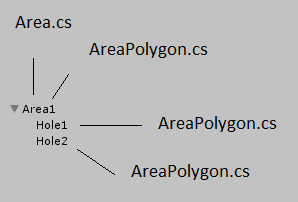 For the editor part, you may want to separate the Area component into an AreaPolygon and Area pair, with the former only keeping track of the vertices that make up the polygon, and the latter taking in those vertices, triangulating the polygon and returning a random position. Add empty GameObjects as children to the Area GameObjects, and give them AreaPolygon components. The Area component will gather all the Hole AreaPolygon data from its children and consider each one as a hole inside its own polygon.

Roblox, good or bad for the world of game development?

What to read to fall in love with math 💚