Jetpack 7.1 was released a little over a month ago. And while it’s not unusual for people to discuss plugin updates when it comes to new features, security fixes, and more – especially on such a widely used plugin as Jetpack – this release is stirring up some lively debate.

But what many people don’t realize is that this release is also implementing feature suggestions in the WordPress plugin search screen whenever a user searches for a similar feature already found in Jetpack. You can test this by searching for terms like “social share” or “backups” in the plugin search bar. 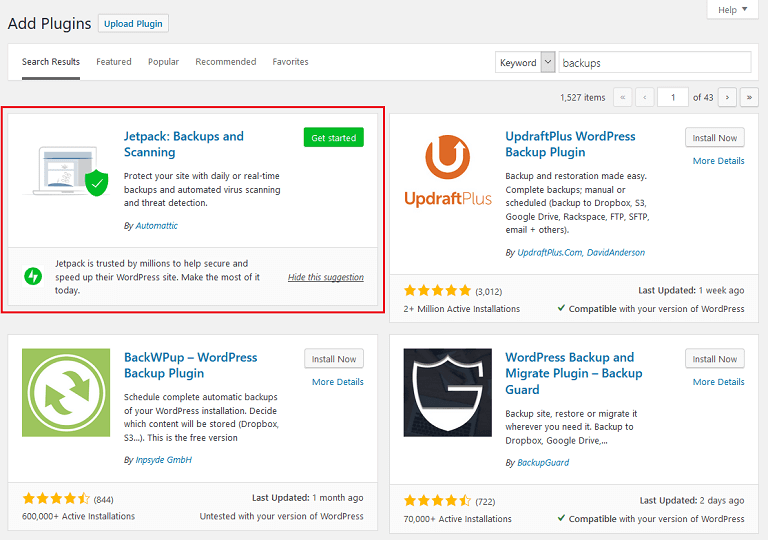 Notice that Jetpack’s existing feature takes the number one spot, pushing all other suggestions down a notch.

Though Jetpack claims their intentions are to let current Jetpack users know about features not being used, so they don’t download unnecessary plugins (after all, there are 45 modules), many in the WordPress community are crying foul.

The Problem with Jetpack’s Feature Suggestions

It’s been eight years since Jetpack was first released. And with 45 distinct modules in the plugin, it’s fair to say most people don’t take advantage of every single one available. In fact, most people are probably not even aware of all the Jetpack modules that exist, especially since Jetpack is so commonly pre-installed on WordPress websites with hosting.

People using self-hosted WordPress sites don’t always have a say when it comes to pre-installed software like Jetpack being added to their websites. And yet it happens all the time.

And while the option to uninstall a plugin like Jetpack is available, we all know this isn’t always going to happen, especially if a site owner is brand new to WordPress.

In other words, those looking for plugin solutions are going to think using Jetpack is always the best option and third-party plugin developers will find it harder to compete with these artificial results.

It’s not enough to think about whether Jetpack is violating any rules, misleading users, or making things harder on plugin developers. You have to think beyond the current situation when something like this happens.

For instance, what if every other plugin that comes with a suite of features starts hijacking the plugin search screen and making suggestions?

Website owners performing searches may see multiple artificial results before seeing any real results. And if the behaviour of site owners is anything like the behaviour of those running simple Google searches, it’s not likely they’re going to scroll very far to find what they “think” is a suitable solution.

This makes competing with plugin suites nearly impossible, sets a terrible precedent for future plugin releases, and is a disservice to WordPress users.

Worse yet, hijacking the plugin search screen leaves room for things like:

But is Jetpack Breaking the Rules?

Remember all the fuss about Gutenberg and how life-ending it seemed before its official release? Well, some people might still hate it, but all-in-all people are adjusting, as they often do with major changes. The thing is, when Gutenberg was released, there was no bending or breaking of the rules. It was simply a major change to the way things used to be – and some people don’t like change.

However, when it comes to Jetpack’s feature suggestions, there’s a lot of talk about whether any official guidelines are being broken. After all, Jetpack (and their supporters) loudly claim they’re not:

But is this the whole truth?

When you search the term “backups,” the first solution to pop up is “Jetpack: Backups and Scanning”. Lo and behold, this is a premium feature offered by Jetpack , and can easily be construed as advertising a premium upgrade. And since it ranks as the number one spot in the search results, it subtly implies that Jetpack’s backup solution is the best option in the market.

Try it again using the term “search” and see what turns up in the first spot. Yup, you guessed it, Jetpack: Search, complete with a call to action button encouraging people to upgrade , which is a clear violation of the “no advertising” guidelines. 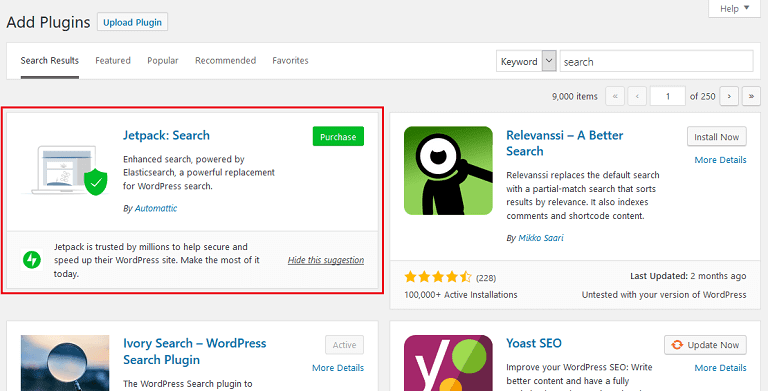 Allowing Jetpack to promote their premium products while other plugin solutions follow the guidelines is giving them a chance to abuse their position as an all-in-one plugin solution and gain an unfair advantage. It may also encourage other single feature plugins to start combining into plugin suites to do the same, which could get messy quickly.

Jetpack Backtracks (Kind of) with Another Update

It’s worth noting that despite Jetpack’s move to remove what were clearly advertisements for premium plugin upgrades, some in the WordPress community are still upset.

“We made a mistake, and we’re moving to correct it immediately,” Jetpack team representative Jesse Friedman said. “Our intention with these feature hints is to help you discover helpful features of Jetpack that you already have, right when you need them most. Today we’re correcting an error in judgement that resulted in the hints suggesting Jetpack features that actually required an upgrade.”

Though Jetpack is claiming that inserting premium upgrade suggestions was a “mistake,” their admission that it was also “an error in judgment” makes it seem as though this was a conscious decision that backfired.

The team at Jetpack has also re-designed the feature suggestions in an attempt to make it more clear that these are suggestions and not a part of the plugin search algorithm. 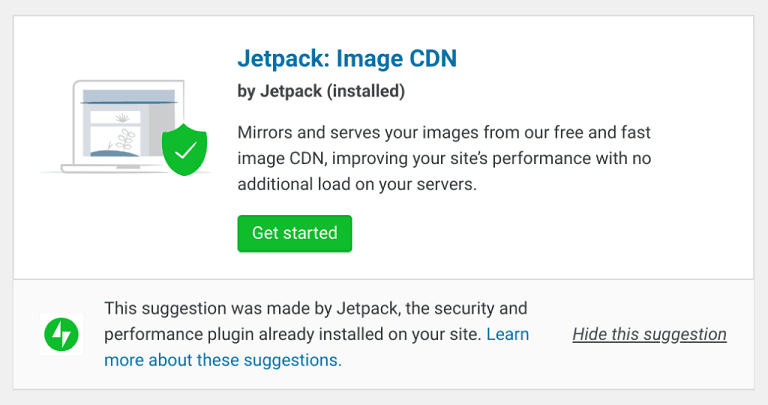 If users disable more than two hints, Jetpack will no longer make suggestions when a search is performed.

Developers wanting to turn off feature suggestions altogether can use this code:

In the end, website owners may very well be looking for an alternative to their Jetpack features. And by allowing Jetpack to usurp the search results, “not” advertise their premium features, and decide whether another plugin developer can do the same, we make finding alternatives harder for people.

If you ask us, changing the guidelines or the people who govern them is in direct order.

But the worst part about it all is that it actively divides what is meant to be a strong community of people, dedicated to helping users build websites, find help when needed, and achieve success.

featured image credits to Photo by Ed 259 on Unsplash

The post Jetpack’s Feature Suggestions Are Hijacking What WordPress Is All About appeared first on WordPress Support Services by BitofWP.

Magazine the WordPress Plugin for PrintCSS