This is a summary of chapter 9 of the Introduction to Statistical Learning textbook. I’ve written a 10-part guide that covers the entire book. The guide can be read at my website, or here at DEV. Subscribe to stay up to date on my latest Data Science & Engineering guides!

Support vector machines (SVMs) are often considered one of the best “out of the box” classifiers, though this is not to say that another classifier such as logistic regression couldn’t outperform an SVM.

SVMs are intended for the binary classification setting, in which there are only two classes.

What is a Hyperplane?

In other words, a hyperplane essentially divides a p-dimensional space into two parts.

Suppose that we had a training dataset with p predictors and n observations. Additionally, the observations were either associated with one of two classes. Suppose that we also had a separate test dataset. Our goal is to develop a classifier based on the training data, and to classify the test data. How can we classify the data based on the concept of the separating hyperplane?

Assume that it is possible to create a hyperplane that separates the training data perfectly according to their class labels. We could use this hyperplane as a natural classifier. An observation from the test dataset would be assigned to a class, depending on which side of the hyperplane it is located. The determination is made by plugging the test observation into the hyperplane equation. If the value is greater than 0, it is assigned to the class corresponding to that side. If the value is less than 0, then it is assigned to the other class. 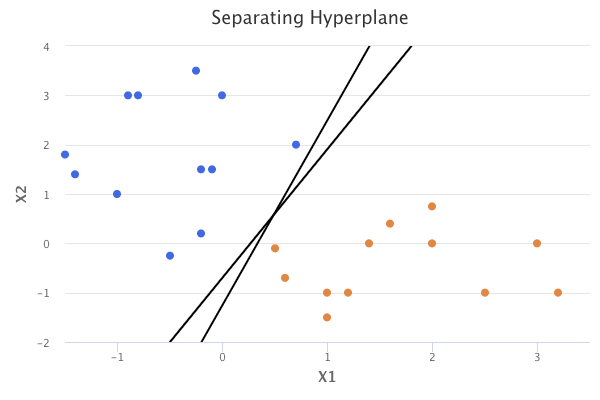 This is where the maximal margin classifier helps determine the hyperplane to use.

The maximal margin classifier is a separating hyperplane that is farthest from the training observations.

The maximal margin classifier is often successful, but can lead to overfitting when we have a lot of predictors in our dataset. 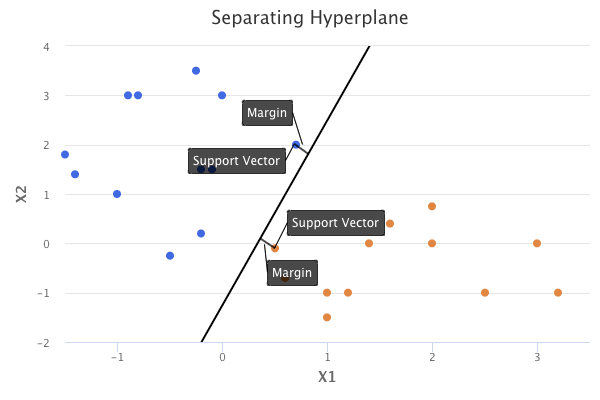 Construction of the Maximal Margin Classifier

The maximal margin hyperplane is the solution to an optimization problem with three components:

M is the margin of the hyperplane. The second component is a constraint that ensures that the perpendicular distance from any observation to the hyperplane is given by the following:

The third component guarantees that each observation will be on the correct side of the hyperplane, with some cushion M.

The maximal margin classifier is a natural way to perform classification, but only if a separating hyperplane exists. However, that is usually not the case in real-world datasets. 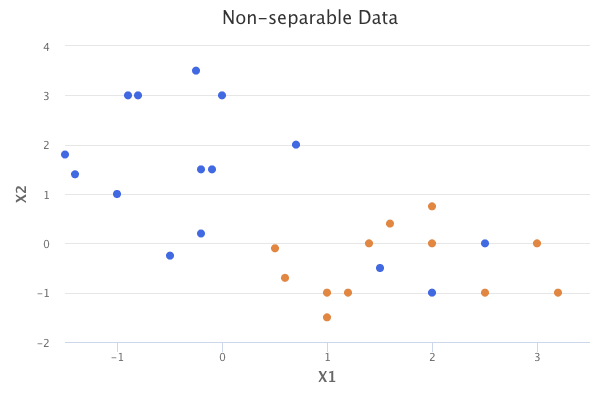 The concept of the separating hyperplane can be extended to develop a hyperplane that almost separates the classes. This is done by using a soft margin. The generalization of the maximal margin classifier to the non-separable case is known as the supper vector classifier.

In most cases, we usually don’t have a perfectly separating hyperplane for our datasets. However, even if we did, there are cases where it wouldn’t be desirable. This is due to sensitivity issues from individual observations. For example, the addition of a single observation could result in a dramatic change in the maximal margin hyperplane.

Therefore, it is usually a good idea to consider a hyperplane that does not perfectly separate the classes. This provides two advantages: 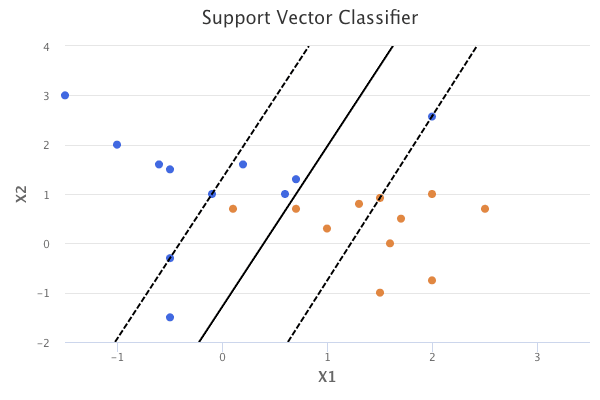 Details of the Support Vector Classifier

The support vector classifier will classify a test observation depending on what side of the hyperplane that it lies. The hyperplane is the solution to an optimization problem that is similar to the one for the maximal margin classifier. 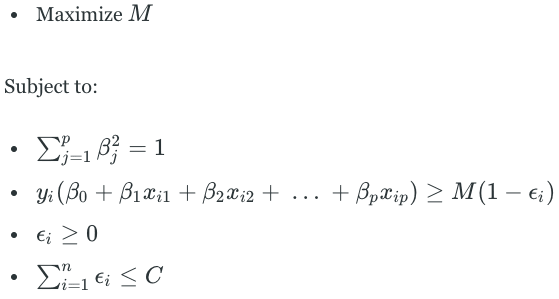 M is the margin of the hyperplane. The second component is a constraint that ensures that the perpendicular distance from any observation to the hyperplane is given by the following:

ϵ is a slack variable that allows observations to be on the wrong side of the margin or hyperplane. It tells us where the i-th observation is located, relative to the hyperplane and margin.

C is a nonnegative tuning parameter that bounds the sum of the ϵ values. It determines the number and severity of violations to the margin and hyperplane that will be tolerated.

In other words, C is a budget for the amount that the margin can be violated by the n observations. If C = 0, then there is no budget, and the result would simply be the same as the maximal margin classifier (if a perfectly separating hyperplane exists). If C > 0, no more than C observations can be on the wrong side of the hyperplane because ϵ > 1 in those cases, and the constraint from the fourth component doesn’t allow for it. As the budget increases, more violations to the margin are tolerated, and so the margin becomes wider.

The fact that the supper vector classifier is based only on a small subset of the training data means that it is robust to the behavior of observations far from the hyperplane. This is different from other classification methods such as linear discriminant analysis, where the mean of all observations within a class help determine the boundary. However, support vector classifiers are similar to logistic regression because logistic regression is not very sensitive to observations far from the decision boundary.

First, we will discuss how a linear classifier can be converted into a non-linear classifier. Then, we’ll talk about support vector machines, which do this in an automatic way.

The support vector classifier is a natural approach for classification in the binary class setting, if the boundary between the classes is linear. However, there are many cases in practice where we need a non-linear boundary.

In chapter 7, we were able to extend linear regression to address non-linear relationships by enlarging the feature space by using higher-order polynomial functions, such as quadratic and cubic terms. Similarly, non-linear boundaries can be created through the use of higher-order polynomial functions. For example, we could fit a support vector classifier using each predictor and its squared term:

This would change the optimization problem to become the following: 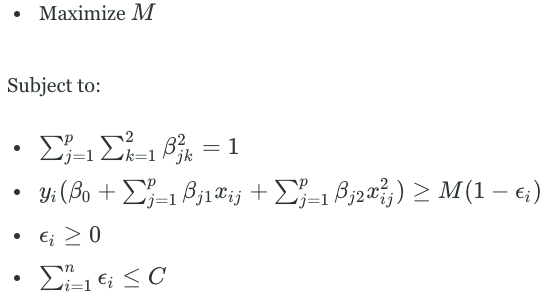 However, the problem with enlarging the feature space is that there are many ways to do so. We could use cubic or even higher-order polynomial functions. We could add interaction terms. Many possibilities exist, which could lead to inefficiency in computation. Support vector machines allow for enlarging the feature space in a way that leads to efficient computations.

The linear support vector classifier can be represented as:

A kernel is a function that quantifies the similarity of two observations, and is a generalization of the inner product. The kernel function used in the support vector classifier is simply

This is known as a linear kernel because the support vector classifier results in a linear boundary. The linear kernel determines the similarity of observations by using the Pearson correlation.

Instead of using the linear kernel, we could use a polynomial kernel: 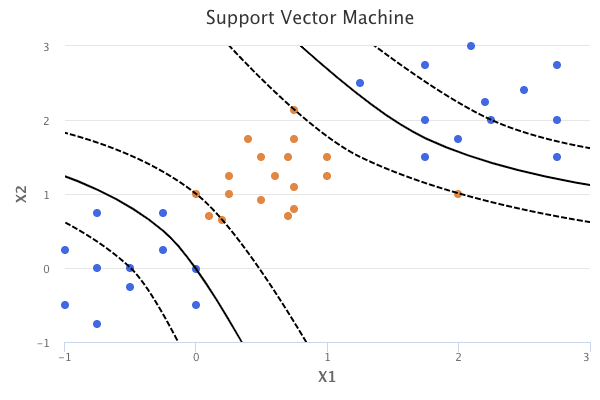 The polynomial kernel is just one example of a nonlinear kernel. Another common choice is the radial kernel, which takes the following form: 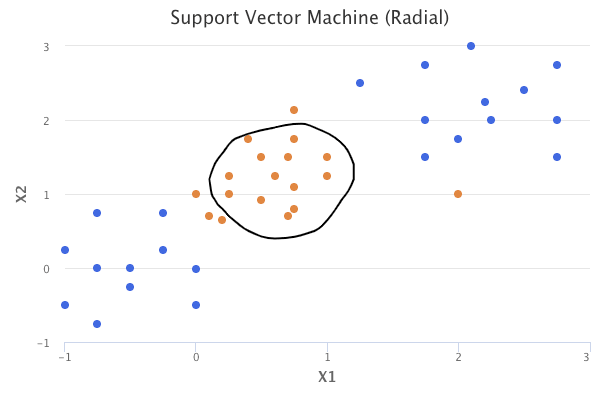 The advantage to using kernels is that the computations can be performed without explicitly working in the enlarged feature space. For example, in the polynomial kernel, we are simply determining the summation of the inner products, and then transforming our result to a higher degree or dimension d. This is known as the kernel trick.

SVMs with More than Two Classes

The concept of separating hyperplanes upon which SVMs are based does not lend itself naturally to more than two classes. However, there are a few approaches for extending SVMs beyond the binary class setting. The most common approaches are one-versus-one and one-versus-all.

As previously mentioned, only the support vectors end up playing a role in the support vector classifier that is obtained. This is because the loss function is exactly zero for observations that are on the correct side of the margin.

The loss function for logistic regression is not exactly zero anywhere. However, it is very small for observations that are far from the decision boundary.

Due to the similarities between their loss functions, support vector classifiers and logistic regression often give similar results. However, when the classes are well separated, support vector machines tend to perform better. In cases where there is more overlap, logistic regression tends to perform better. In any case, both should always be tested, and the method that performs best should be chosen.

Originally published at https://www.bijenpatel.com on August 9, 2020.

I will be releasing the equivalent Python code for these examples soon. Subscribe to get notified!

How to Store your NFT and Showcase it in Augmented Reality!

Getting to know Flutter: Hero animations