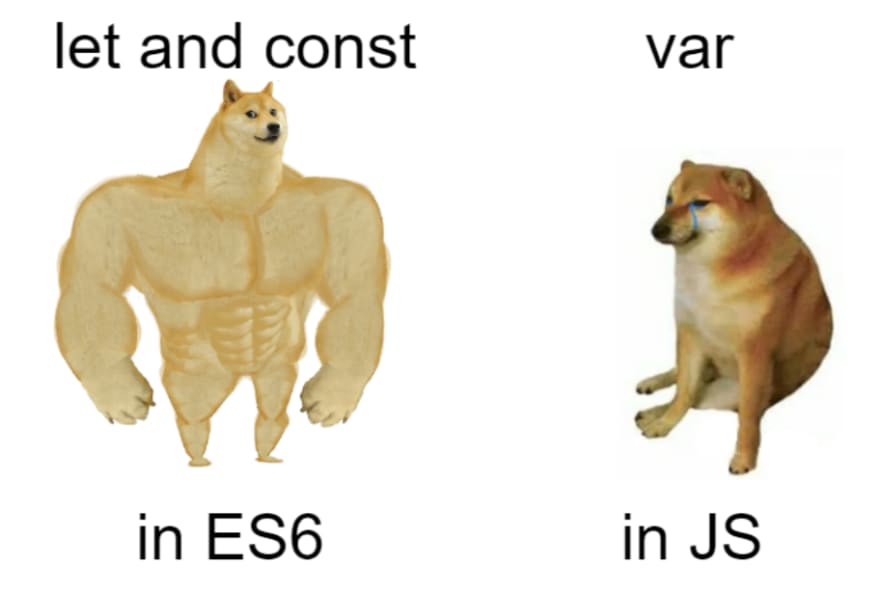 First, let's start with describing variables. A variable can be thought of as an indicator to the computer to associate a value with a particular name, and to keep track of it when it is stored in memory. 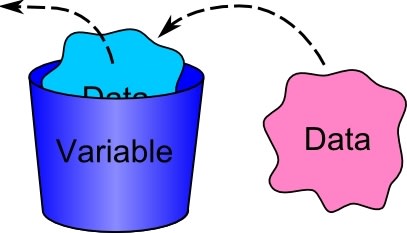 This allows for the value to be used in the future for different operations, just by using the name.
Variables are one of the key concepts that make up any programming language. They can be described as the building blocks of a language, thus it is important to know about the types and how to use them properly.

"var" keyword is the original way of creating variables in JavaScript. When you use this keyword in front of a name or string, and assign a value to it, you are creating a location in the memory where this particular value is stored.

Now the important thing to note about var is that it's function scoped or globally scoped.

Scope is a common concept in programming languages. Scope essentially means all the places in the program where a variable or a function is visible and thus can be accessed or called.

If a variable is said to be outside a scope, it means the program does not have access to the variable in the scope where it is currently in. The variable might exist somewhere else in the program, but can't be used in the current part of the program.

JavaScript has 3 types of scope:

Var is defined as being function scoped or globally scoped, which means:- 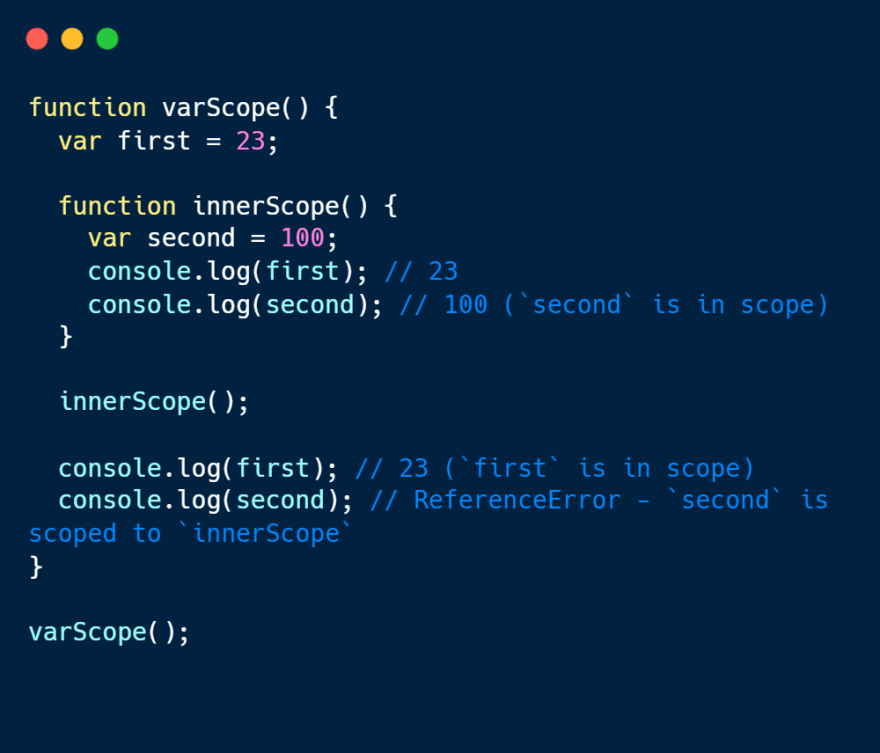 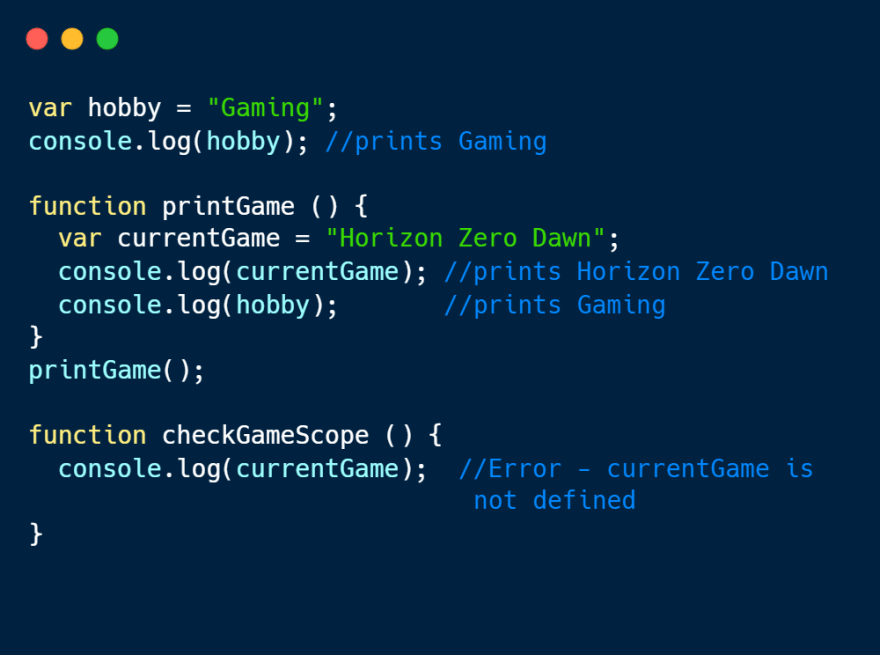 What is var hoisting?

Var hoisting is another peculiar property of var variables. In most cases, it's not very common to see variables being used before they are declared. But this is possible using var, as var declarations are processed before any code is executed. 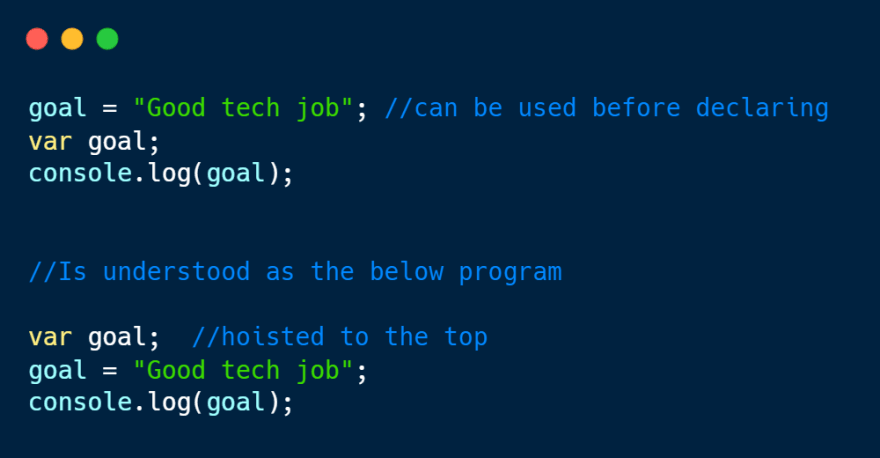 There is a very important distinction here - when a var is hoisted, only its declaration is hoisted and not the initialization. The initialization happens only when the assignment statement is reached. Till then the variable remains undefined (but declared). 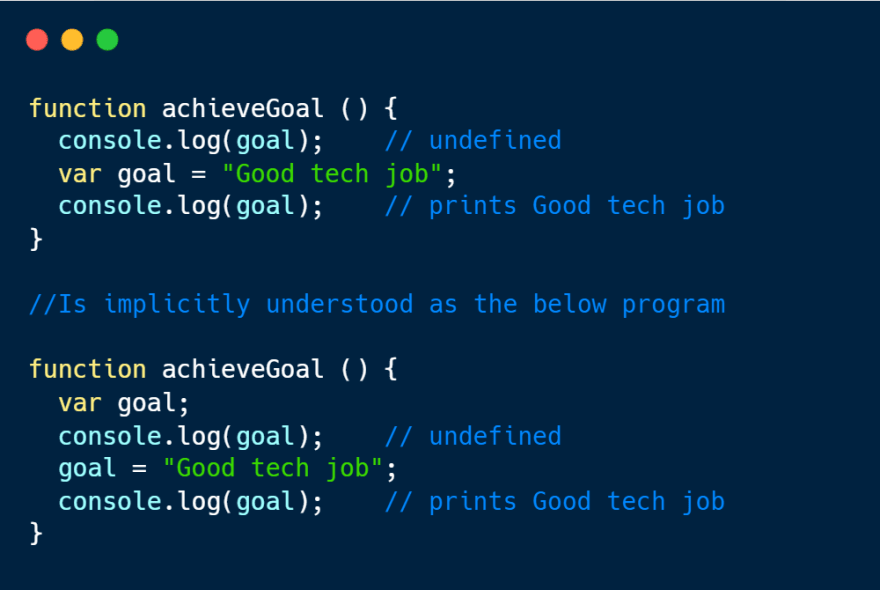 "let" is the second way of declaring variables. Let and const were released with ES2015 (EcmaScript6). Initialization with a value is optional.

Also, unlike var, let is initialized to a value only when the program reaches the part where it is present.

let variables are created with a block scope, or scope of expression on which it is used. This is unlike the var keyword, which declares a variable globally, or locally to an entire function irrespective of block scope. The below code will help you understand the block scope. A block can be seen as the part of the program between two { }. 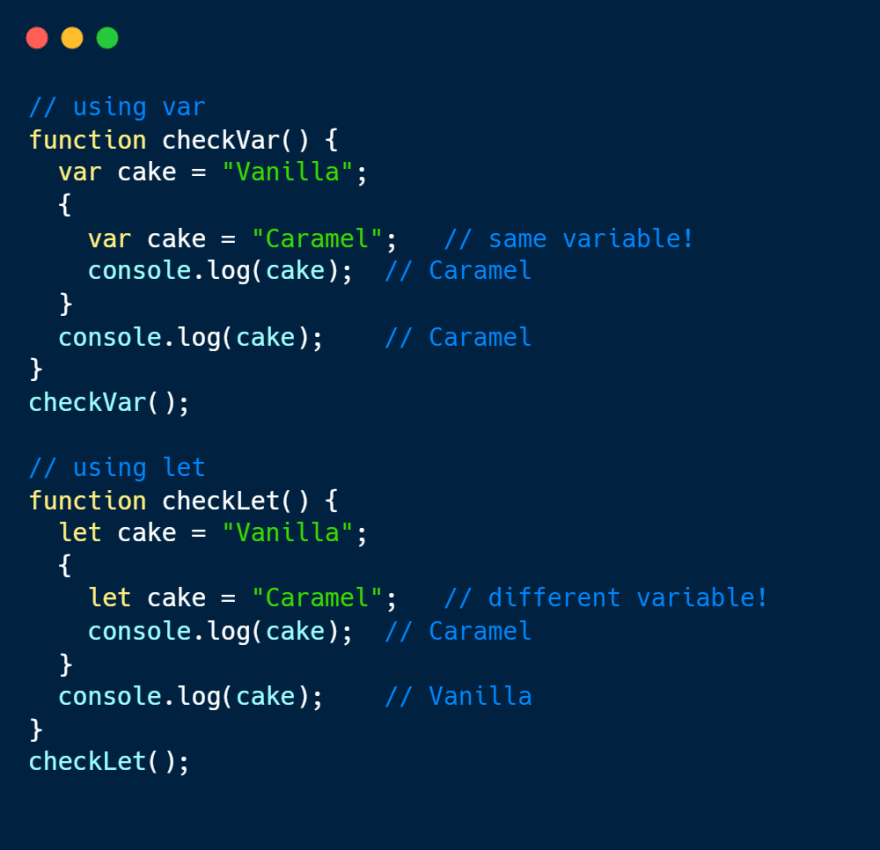 Another difference between let and var is that while var variables can be accessed before being declared (as we saw above, undefined is printed if you do this), let variables cannot be read/written until they have been declared.

"const" was the second form of variable declaration released in ES6 along with let. Const is used as a short form for constant, and does exactly what the word means. It is used for variables that will be constant throughout the program and never change.

It is the same as casting a variable value in cement, instead of just putting it in a box (var & let), as it will stay the same. Its value can't be changed using assignment operators. 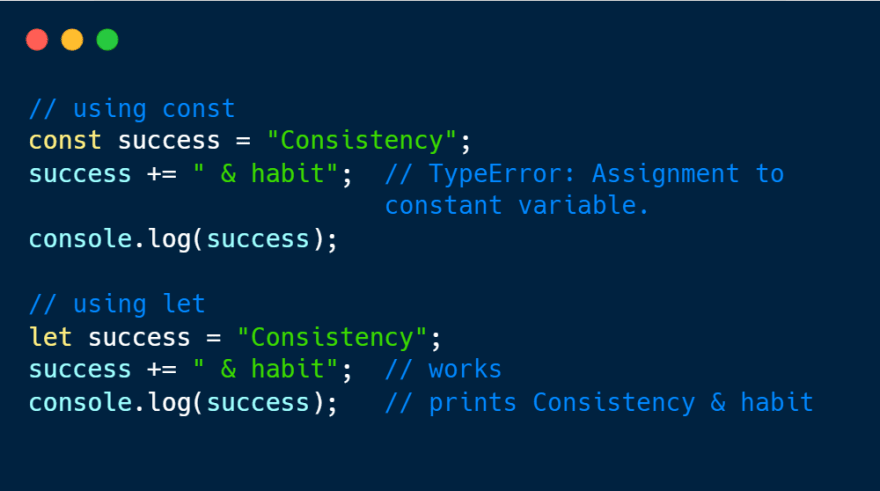 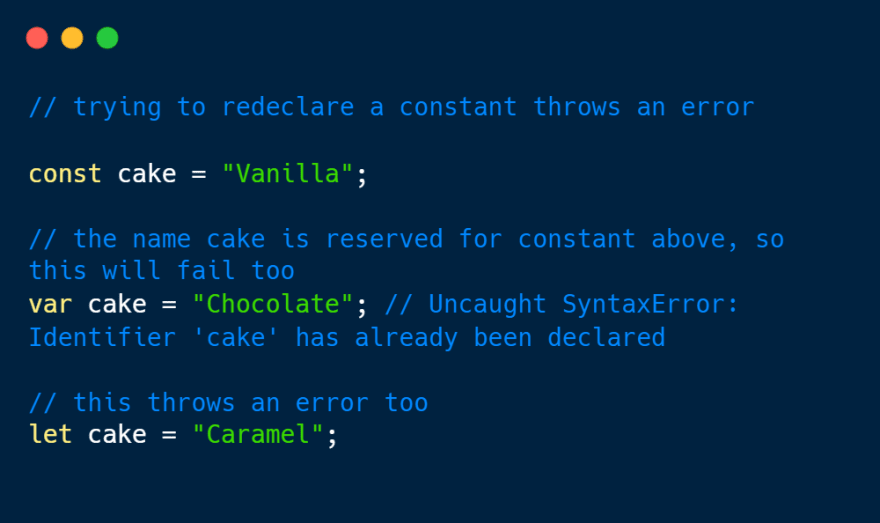 Const has a block scope, which works the same way as described above with let. 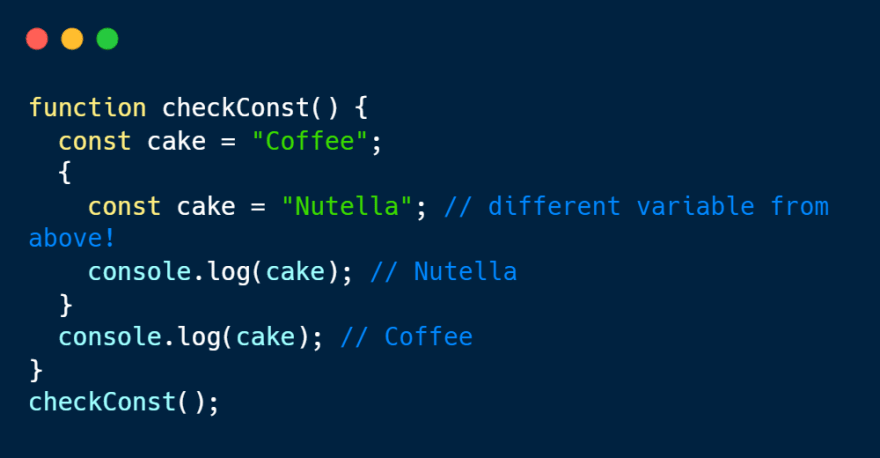 Const in objects and arrays

Const variable values cannot be changed but this doesn't apply to objects and arrays. 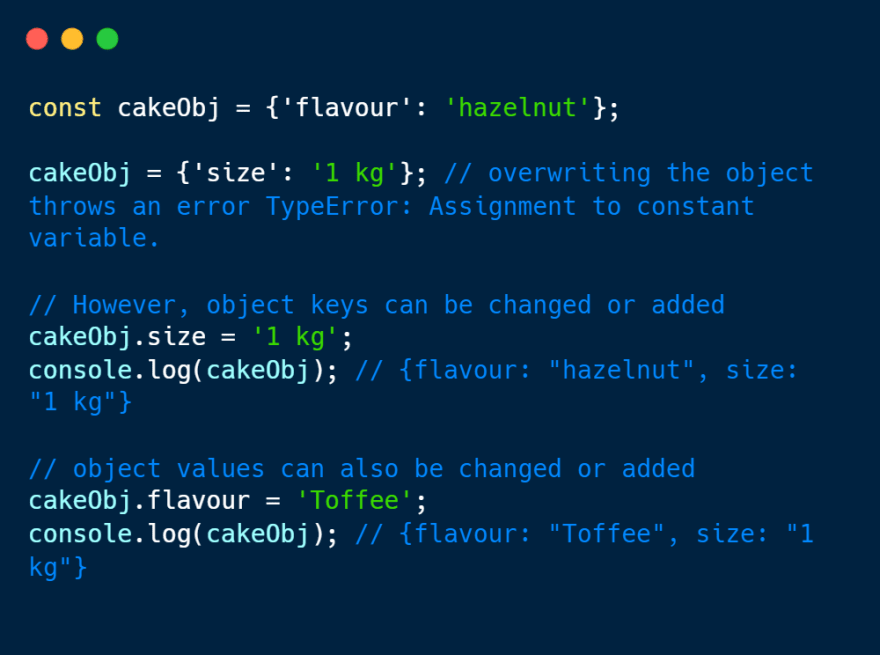 Similarly, in the case of arrays values can be added and deleted from the array:- 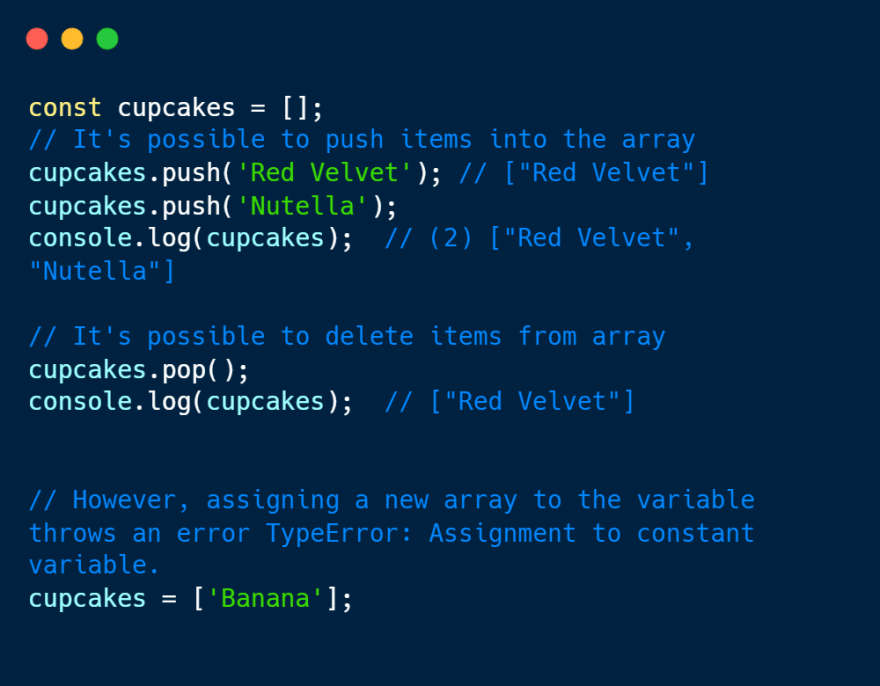 Let's summarize the blog with the differences among var, let and const. 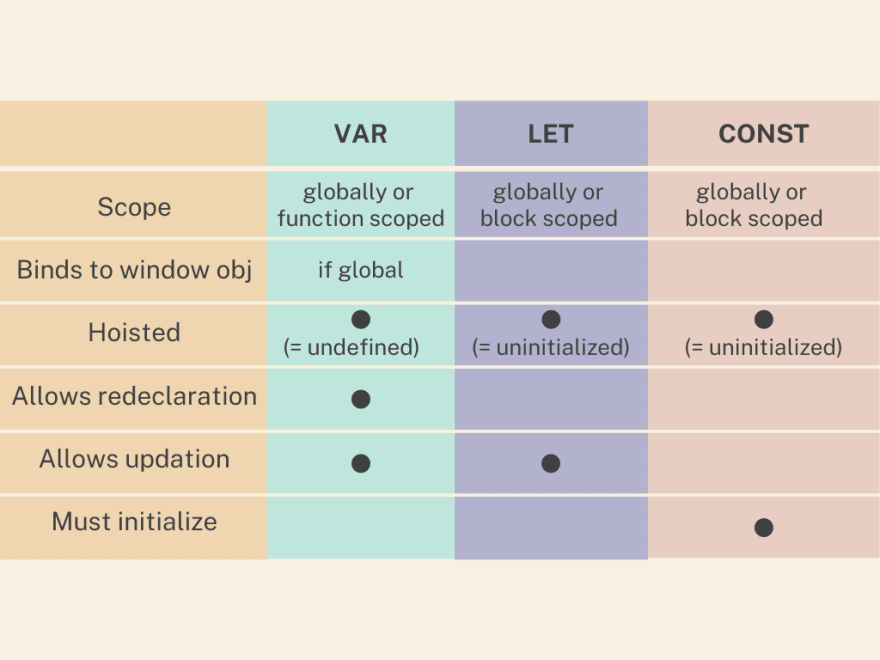 Now coming to what you should use, it's usually a personal preference but ideally, you should avoid using var due to its peculiar behavior at times. Prefer using let for variables that need to be changed and const for those that will remain the same.

That's it from my side, hope you learned something new :)
Feel free to reach out to me on Twitter or Linkedin

Once suspended, bhavzlearn will not be able to comment or publish posts until their suspension is removed.

Once unsuspended, bhavzlearn will be able to comment and publish posts again.

Once unpublished, all posts by bhavzlearn will become hidden and only accessible to themselves.

If bhavzlearn is not suspended, they can still re-publish their posts from their dashboard.

Once unpublished, this post will become invisible to the public and only accessible to Bhavya Joshi.

Thanks for keeping DEV Community 👩‍💻👨‍💻 safe. Here is what you can do to flag bhavzlearn:

Unflagging bhavzlearn will restore default visibility to their posts.