As part of trying to learn more about Kubernetes, I thought it’d be interesting to setup a mini cluster running on Raspberry Pis. I had no real purpose for doing this, but figured it would be a good learning experience and would leave me with a somewhat realistic environment.

There are already a ton of great resources that cover various aspects of running Kubernetes on Raspberry Pi. This post is just a summary of the steps that worked for me for reference.

I decided a three node cluster would be enough to get started. Here are the items I purchased:

Most likely the 4GB model would have been more than enough, but for $20 more you can double the RAM to 8GB. Also, I already had an 8-port switch with some ethernet cables, although each Pi also has on-board Wifi as an option.

The instructions for setting up the cluster case are available online. I think it could have been made a little simpler, but overall it wasn’t too hard. Pay close attention to the orientation of everything in the pictures.

Here is what my setup looked like after putting it together: 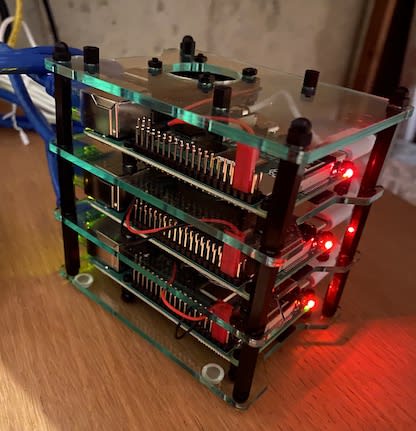 Before we can prepare the SD cards, we have to decide which operating system to use, which then leads to thinking about which Kubernetes distribution to use.

After doing some research, it seemed like there were two main options:

Since Raspberry Pi OS is the official operating system, I decided to go with that and give K3s a try.

At this point, the Pis should boot up and get assigned a dynamic IP address on your home network, just like any other device. You can use your router’s admin console to determine the IP addresses.

Once you have the IP addresses, you can test SSH to each one by running ssh pi@<ip-address>, using the password you set when imaging the SD cards.

For this example, we’ll use:

To set the static addresses, do the following:

At this point you can test the SSH aliases to confirm that you can SSH to each Pi using a hostname mapped to the static IP address. For more detailed information, see Setting a Static IP Address on Raspberry Pi.

This is not really a requirement to run Kubernetes, but it will be more convenient to not type passwords over and over, plus it will allow us to use Ansible to issue commands to the Raspberry Pi nodes.

At this point, you should be able to run any of the SSH aliases without entering a password.

I also followed a similar process to setup password-less SSH between all of the Raspberry Pi nodes, but this is also just a nice-to-have and not necessary.

For installing k3s, I used the k3s-ansible setup, which required that I get Ansible on my laptop. I already had pip3 installed through homebrew, so installing Ansible amounted to:

Assuming the setup completed successfully, you can configure kubectl on our local machine to connect to the k3s cluster.

At this point you should have a working k3s cluster to play around with.

As a next step, you can try following the k3s docs for installing the Kubernetes Dashboard.

Troubleshooting "Did you specify the right host or port?" Amazon EKS Error:

Once suspended, bbende will not be able to comment or publish posts until their suspension is removed.

Once unsuspended, bbende will be able to comment and publish posts again.

Once unpublished, all posts by bbende will become hidden and only accessible to themselves.

If bbende is not suspended, they can still re-publish their posts from their dashboard.

Once unpublished, this post will become invisible to the public and only accessible to Bryan Bende.

Thanks for keeping DEV Community 👩‍💻👨‍💻 safe. Here is what you can do to flag bbende:

Unflagging bbende will restore default visibility to their posts.