I am a very lazy person. I sometimes go to take a nap & because I'm already in bed, I do not want to stand up & go shutdown my PC myself.

So that's why I thought to myself I might create some small script that listens to a certain port & runs as a daemon/service in the background. That should save me standing up from my bed.

Choosing how to implement the idea

At first I thought I should make some sockets, given the simplicity of the task, but because this is too low-level for me & as I mentioned before I am too lazy to do everything by hand, I eventually chose Express.JS. Given that it is easy to setup a simple HTTP server very quickly & easily.

For the actual implementation.

We implement the auxiliary shutdown function, that executes the shutdown signal, here I added the time flag -t & gave it 30 seconds so the shutdown takes 30 seconds. Feel free to add whatever options you want, maybe even a restart.

Useful tip use shutdown -a to cancel the programmed shutdown or restart.

Here is the first GET method:

As you can see I decided to serve an HTML page statically.
This page has a stylized shut-down button. When clicked, the button fires the actual shutdown command and another GET request that shows a countdown till shutdown.

Now that the functionality is implemented, you can opt to using a template engine like Pug, but I stuck with simple way of serving static files.
For that you need to use the static middleware from Express.js.
I created a public directory where the static files will be & used the middleware to point to it.

I used following snippets for my button styling and the counter. I also used font-awesome's CDN, to get the power-off icon.

CSS Counter
Really well written code you only need to change the duration to your liking and embed it in your served HTML.

CSS Pulse power-off
You just need to change the color and add the desired icon from font-awesome.

Under Linux this is no issue using systemctl.
With Windows it is kinda tricky you need to first download and install nssm. For brevity I won't explain how to install it. But it should be very simple. And it'll help you a lot.
Now that we have nssm installed we now need to convert our index.js to an index.exe. To do that we need to install the pkg dependency globally.

After that we execute following command as an admin:

Now we run the following command in cmd:

Prompting following window, we click on the locate button and choose our executable 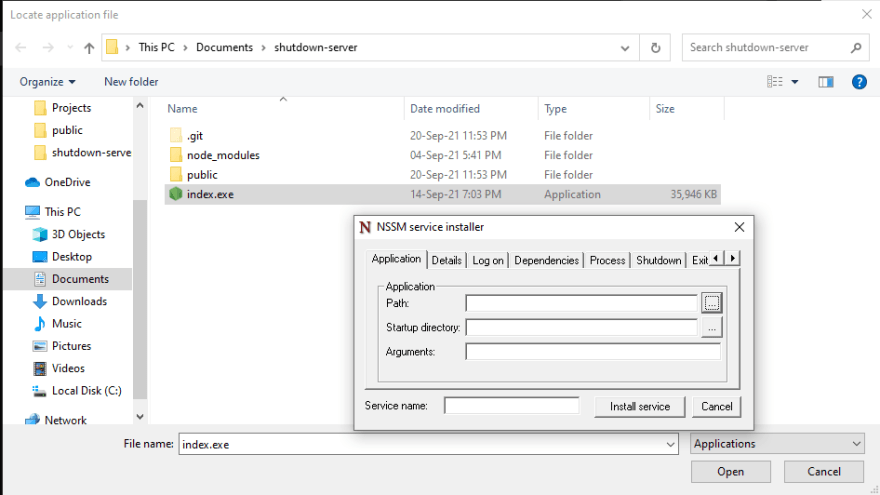 Then we name our service I'll name mine shutdown-server and press Install service. 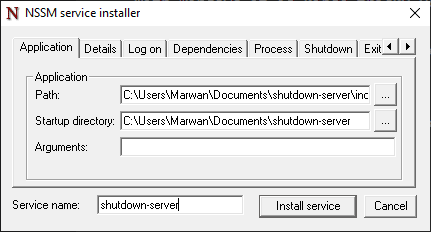 Opening the task manager and checking the service tab for our service. 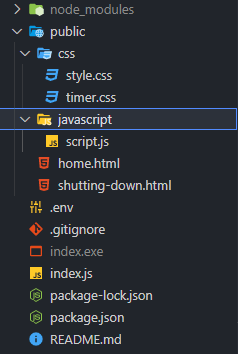 How to use Linux to Recover Deleted Files