Serverless is Cloud-computing execution model in which the cloud provider runs the server, and dynamically manages the allocation of machine resources. So essentially you can focus on writing code as your Cloud Provider does the rest

This is the first part of this series:

In this article we will cover the following:

We already assume that putting your apps in the Cloud is a given. With that we mean you’ve seen the benefits that mean in terms of not having to maintain hardware, only pay for what you actually use and so on.

TLDR; if you just want to learn how to build an Azure function, and don’t want a long speech on theory, then jump to the headline called “Creating a function app”, you can always read some Serverless and Azure theory later :)

There is so much to learn on this topic and there are some great docs as well as LEARN modules to help you in your learning process:

The many choices in the Cloud

Now, being in the Cloud means you have options, A LOT of options in fact. You can be on the lowest level deciding exactly what memory, or hard drive type, your apps can run on. Then you can be on a more managed level where you are happy to create a Virtual Machine, a so-called VM, where you can install the OS and software you need. There are still more steps on this ladder namely running your applications in App Services where you don’t have a VM anymore, just a place for your code to reside and yes you can decide what OS to run this on but that’s pretty much it, it’s a SaaS, software as a Service platform. BUT, there is a step above that — Serverless.

So what does Serverless mean? Serverless is Cloud-computing execution model in which the cloud provider runs the server, and dynamically manages the allocation of machine resources. So essentially you can focus on writing code as your Cloud Provider does the rest.

FaaS — function as a service

A FaaS, function as a service is a category of Cloud Computing Services and is about offering a Platform where the infrastructure is maintained and your main worry is the code you write. An application built following the above model is said to use a serverless architecture

All the great Cloud providers have a FaaS offering:

Ok, what benefits does it offer then?

Azure has two kinds of approaches for Serverless architecture

What else is there to know about Serverless?

Is it all unicorns and rainbows?

Well, Serverless is definitely great but there are some things we need to know about them like:

They do have Drawbacks , drawbacks are in the form of limitations on execution time and execution frequency.

It’s easy to think that your first go-to, for putting apps in Azure, is AppService that fits most likely with your mental model as a developers, you want to move the app that you have from On-Premise to the Cloud and to do so you need to provision databases, creating your Services in App Service and that’s it right? Well, most applications are seldom that simple, they tend to need to talk to a number of subsystems to maybe log in, or grab a piece of data somewhere or perform a computation.

All these side things are maybe the concern of more than one app in your ecosystem so it makes sense to move them out into separate services. Then you might realize you only need to call on these services very seldom like when a new user is created or there is an incoming request. Your response at that point is maybe to place that incoming message on a Queue, or insert a row in a Database or maybe create a Slack notification.

What we are saying here is that maybe we don’t need to pay for a full AppService and the uptime and responsiveness it gives us, but instead we need a framework that can trigger a function based on a predefined event and that can then carry out a computation that results in a side effect like calling another service/database/queue/whatever.

Now we have come to the sweet spot where Serverless really shines, seldom called services that need to do something in response to some kind of event happening.

Serverless computing helps solve the allocation problem by scaling up or down automatically, and you’re only billed when your function is processing work. Speaking of billed, if your FaaS is reading/writing towards a storage that you provisioned, then you are paying for function execution as well as that storage, so keep that in mind authoring your FaaS.

What is a function app?

Functions are hosted in an execution context called a function app. Which means what? Think of the Function app as the project you host your functions in.

Ok, there are some things that need to exist before we can get our function up there in the cloud. Those are:

Now there are different ways of creating a Function app, namely:

In this article, we will focus on the first option but in doing so we will put some focus on some great concepts you need to know about, so stay with me cause we are about to do some coding next:

Let’s head to the portal and log in at 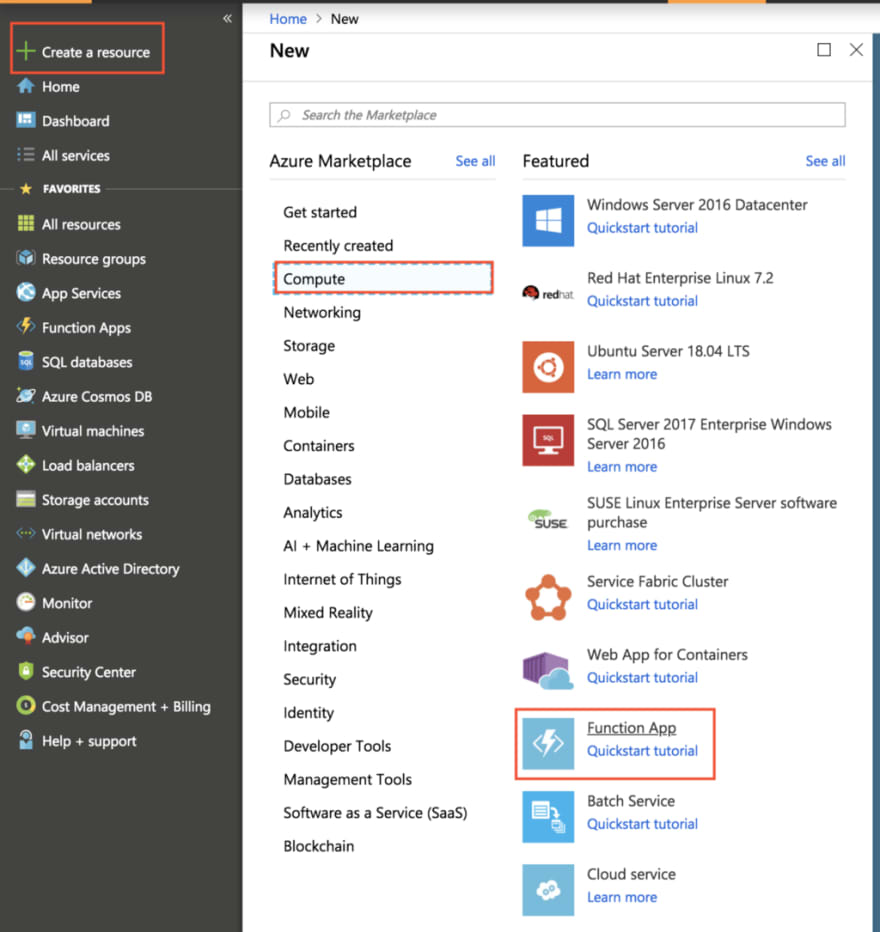 So that's, selecting Create a resource, followed by Compute and finally selecting the Function App template.

Make the choices in the template

Once we’ve selected the Function app template we need to select a few more things. Your UI will at this point look something like this:

Ok so the following choices need to be made:

This takes a while, like a few minutes. Have some coffee or other hot beverage at this point:

Ok great we have a default page, now what? Well, it’s time to add a function to our Function app.

Creating a Function, for your Function app

There are two UI behaviors here depending on whether you have no functions added to your Function app, so you are starting out fresh or the second option being that you have an existing Function app with at least one function in it.

When you create a new function there are some decisions you need to make before you can start coding like:

Starting fresh — no functions added (yet)

When adding your first function, you are presented with the Quickstart screen.

At this point, the following is shown in the middle of the page

Now you are faced with the choice of how to author your Function:

For now, we will go with the In-portal option

We are now faced with:

For now, we will go with the Webhook + API option.

It’s a long list of templates to choose from. Don’t you feel excited that there is so much more? :)

Voila, your function is scaffolded

This is now our coding environment: 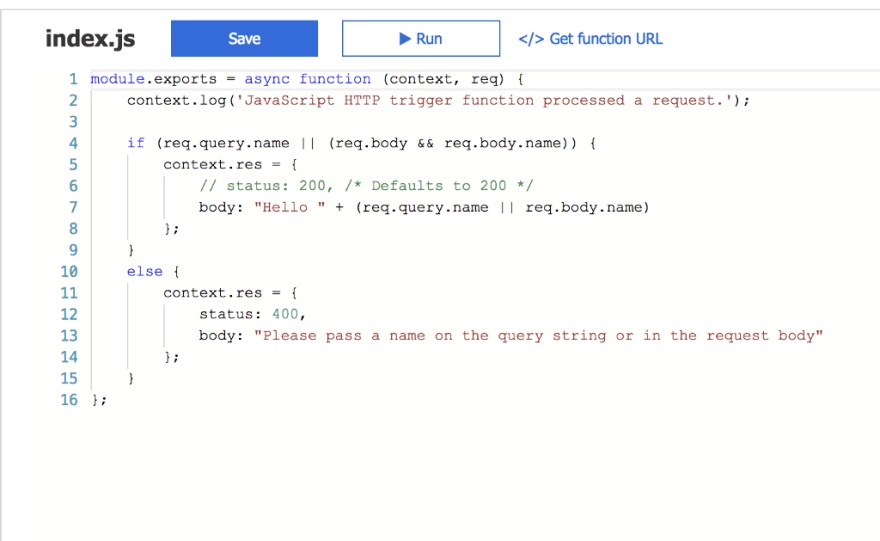 In this scenario, we already have at least one function in our Function app. You want to look for a text saying Function + on in the left menu, it should look like this:

Clicking the + sign will present you with the following screen in the main field: 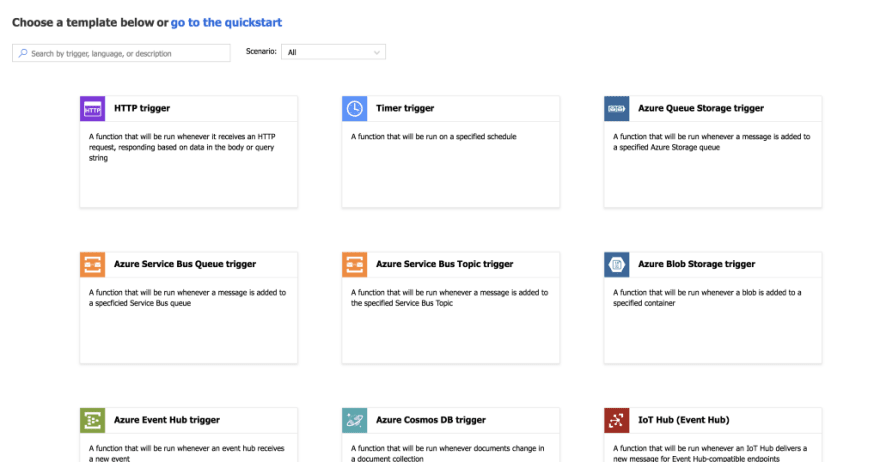 This screen allows you to choose a trigger type (HTTP, Timer, or Data) and programming language (C#, JavaScript, F# or Java). Then, based on your selections, Azure will generate the function code and configuration for you with some sample code provided to display out the input data received in the log

We choose HTTP Trigger, so the first option. 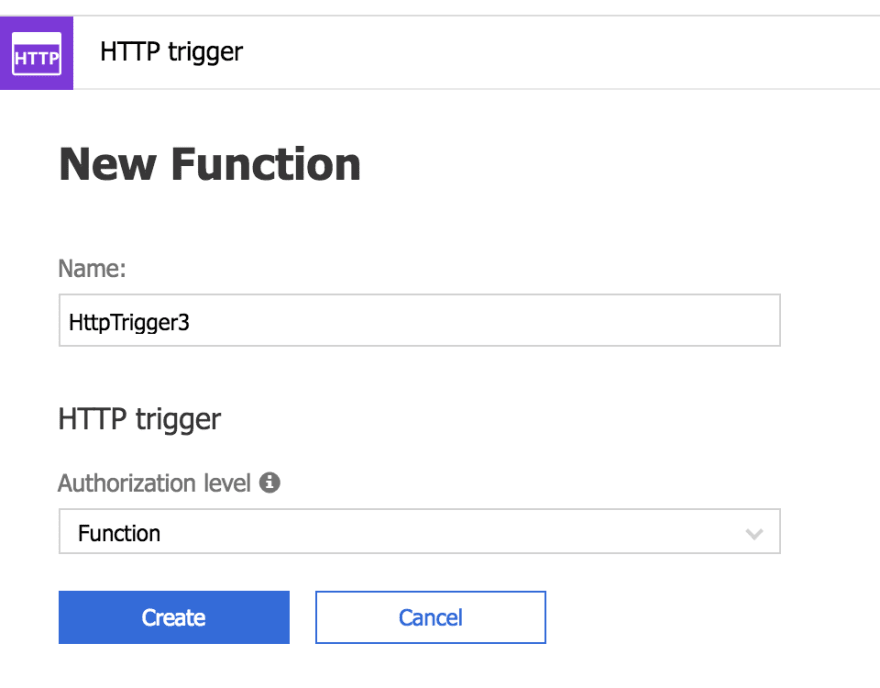 Taking it for a spin

We can test it in the portal or hit the URL. To get a URL we click get function URL and test it in a browser:

After you’ve chosen to copy the URL you head to the browser input the URL and make sure to add &name=chris. Cause if you look at your Javascript code you see that it expects the parameter name in either the body or as a URL parameter. It should look like this:

Ok then shall we build something more fun than a hello world? Ok, it's not going to be a ton more fun but it's at least something you can cringe over like a colleague of mine did look Adam you've made it into the blog post haha.

Ok, we are going to build a… wait for it, drumrolls, a dad jokes service. You know those really bad puns told by a parent that compels you to deny any relations to them, yes those jokes. Google is my friend, so let’s start Googling for some jokes and store them in a list:

Ok, next step is to find some pictures of dogs looking like they are laughing because of the Internet right ;)

What, I didn’t give you the actual image URL, you’re a big developer, I’m sure you can find pictures of dogs on the Internet, or why not cats ;)

Now to select a random dad joke and random image:

Let’s save our code and make sure to set the authorization level to Anonymous.

Above we are describing how to click the menu option Integrate in our left menu followed by selecting Anyonymous in our Authorization level dropdown.

Because why would we want to restrict the usage of this profound function to the outside world? ;)

Taking our app for a spin it now looks like this: 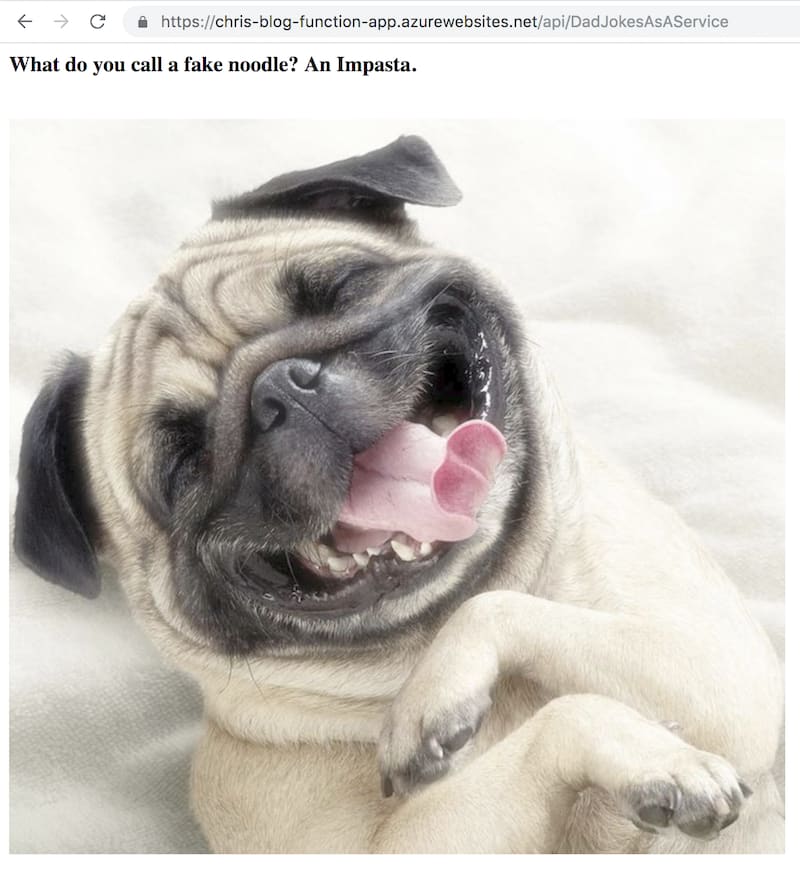 That’s it for this time. We’ve taken you through building your very first app, it wasn’t that hard, was it? :)

There is so much more to say on the Serverless topics. So many different ways we can trigger this function other than HTTP and integrations that are already there and waiting for you to use them. But we have to save something for future parts of this series. Hopefully, you’ve gotten a good idea of what Serverless is and when to use it and how to create your first one of many Azure functions.

Most of all think about the old ways of doing things like handling infrastructure yourself, and thinking about for example load balancing is a thing you barely need to consider yourself with.

See you in the next part hopefully :)

How to restrict the number of requests from a single client in express?

How to Use LocalStorage in 3 Minutes

How to center elements in CSS (CSS Guide) 😜