So, you have a frontend app, written in a SPA framework like Angular, React, Vue or maybe Svelte? And you want to find the quickest way to get it to the Cloud? There are many ways to do so, GitHub, Azure Storage, but there's also Azure Static Web Apps service.

So, there are a few moving parts that you may or may not use, like the below

So, you want to get all this deployed? but before you get so far, you want to make sure that you can test everything on your own machine first, but can you? In a lot of cases, you can't and that leads you to mock certain things like maybe the API or the auth part. So once deploying you are fairly confident it will work, but you are still crossing your fingers. But does it really have to be that way? Why can't you have a great developer experience where everything is testable offline?

Well, Azure Static Web Apps, does come with CLI tool for this, and it delivers on the promise, you can develop your app 100% locally and only when you feel ready can you deploy, if you want. Doesn't that sound nice? Of course it does !

You are probably a bit tentative at this point, you are liking the sales pitch but isn't 100% convinced. 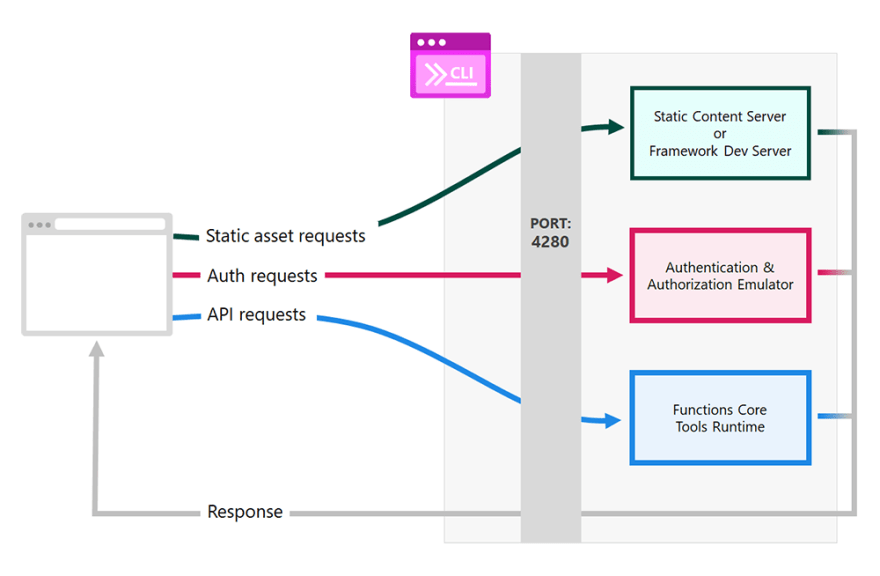 Hmm ok, show me the features?

Sure, here they are:

Ok, sounds good, but I bet it's a pain to install?

Not so much, it's one line of Node.js, like so:

and to start you type:

Hmm, sounds simple enough, so where's my app at?

Ok, nice, you let me server up my frontend. What about the API you said I could have?

Because it's using Azure Functions, you need the libs to run that, so it's a one time install of azure functions core tools like so:

and then there's the command for starting both the frontend and the API:

Ok, I'm liking this more and more, you said something about auth too?

Wait, and that wil just work?

Ok, that's it you got me, I'll go check it out. Where was it again?

The docs are here https://github.com/Azure/static-web-apps-cli

This article talked about the local emulator for Azure Static Web Apps that's really competent and is capable of serving up you entire app, that's frontend, API and even auth. And capable of doing so locally.

How I Think About React (A Mental Model For Beginners) | Part 3: Managing Data