Today we will continue with our previous efforts to Replace i18n Package in Angular, and adapt our Express server to generate multiple static pages per language. The plan is:

Note: if you have multiple builds (as per the default Angular behavior), the output directory would be swapped. For example: /en/static/projects/index.html

The Express rule we had does not need to change, as long as our base href value is set to the right language, which is the behavior expected with URL driven apps.

Run the server, browse to http://localhost:port/en/projects, disable JavaScript, and test. You should be seeing the static version of the file.

The fetch script is on StackBlitz.

This is exactly like URL driven applications, with the exception that the base href is set to root /. No adaptations needed. Read about this solution in Using Angular APP_BASE_HREF.

Single build apps based on a cookie value are not recommended. Nevertheless, let's dig into it. Two things need to be adapted:

In fetch, we are not allowed to set the cookie header, but we can resolve to setting a different header. Then in language middleware we check for that header value along with other factors.

The above with the language loop generates static files inside language folders, like in URL driven apps, with the exception that the generated base href, is set to root /. Now to serve these files, the Express route needs to physically match them, this can be done with a middleware (like serve-static middleware), but here we'll keep it simple:

Unfortunately, in StackBlitz I could not set cookies nor detect custom headers to test the prerender function, but I confirm that it works locally.

The main difference in public hosts is the lack of the powerful Express static middleware, but the solution is to simply save the files as they are, under the client (public) folder. So the only difference if you are hosting on Firebase, Netlify and Surge, is having the prerenderOut folder set to client. But, you still have to create an SSR, at least locally, to be able to generate the prerendered files. So there is no way around having a local Express server to run it. Well, there is one way. It would make the effort smaller. An Angular builder that uses RenderModule. This will have to wait till the next episode. 😴

Thanks for reading on, let me know if you spot any marks that need to be sanded.

If you are hosting your SSR on the cloud under a serverless function, like Firebase, this is as good as an Express server. You can expose your static folder with Express static middleware, and run firebase emulators locally:

then you run a separate express script to simply fetch the already running firebase app (usually at port 5000). Like this:

This will not close the port, and it's easier than trying to run firebase from Node.

The code is in StackBlitz. 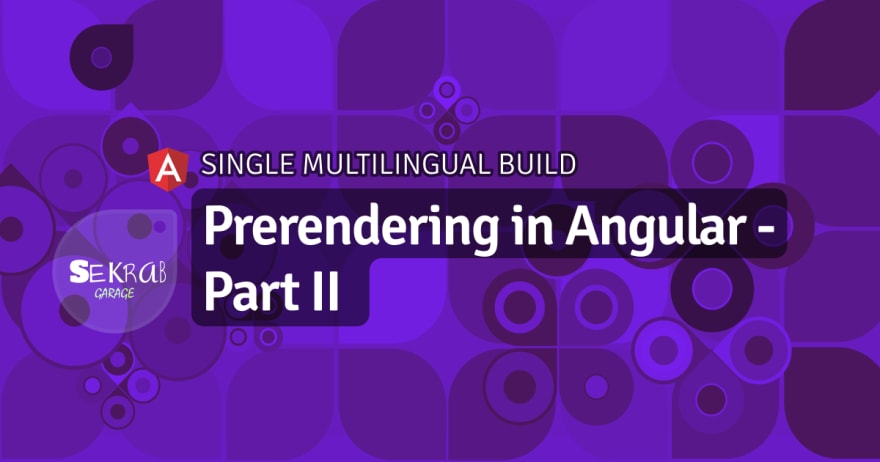 Ayyash
sekrab: a small piece or amount of something, especially one that is left over after the greater part has been used.
Authentication in Angular, why it is so hard to wrap your head around it
#angular #architecture #auth #webdev
The Journey is inevitable, baggage optional
#webdev #startup #discuss
Why building small apps with a long-term mindset is a bad idea
#webdev #productivity #discuss #startup

Once suspended, ayyash will not be able to comment or publish posts until their suspension is removed.

Once unsuspended, ayyash will be able to comment and publish posts again.

Once unpublished, all posts by ayyash will become hidden and only accessible to themselves.

If ayyash is not suspended, they can still re-publish their posts from their dashboard.

Once unpublished, this post will become invisible to the public and only accessible to Ayyash.

Thanks for keeping DEV Community 👩‍💻👨‍💻 safe. Here is what you can do to flag ayyash:

Unflagging ayyash will restore default visibility to their posts.