An issue with prerendering, Angular or other, is that it creates an index.html file inside a route folder. The default behavior of different hosts is to add a trailing slash to serve that static file. Can we fix that?

The first call to our SPA preferred domain.com/route will 301 redirect to domain.com/route/ with a trailing slash. When hydrated, it would rewrite location back to the original, without registering any network redirects. According to a very old article on Google Search Central, it has no effect on searchability. Nevertheless, it made a lot of people nervous since the search console displays the following when trying to crawl prerendered URLs. 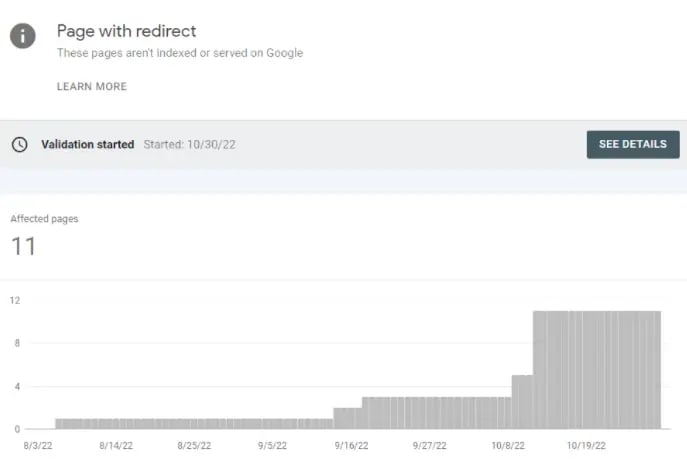 Let's address this issue and try to fix it.

There are multiple ways to generate pre-rendered pages, one of them is through the built-in Angular builder,

Another is through Express. Read about how to Prerender Angular in Express in a previous article.

All of the normal ways create index.html pages with the content, inside folders reflecting the route:

Following are solutions to this problem

Angular solution: out of the box

Here is how Angular defines the server.ts to take care of this problem:

If you pay close attention, this has a server.get(*.*) for all static files (JavaScript and CSS). The pre-rendered pages are served by the second rule.

In ngExpressEngine, the CommonEngine checks if the page path already exists, it serves the file, else rolls back to SSR generated main.js. This is not always an option.

One instance that won't work is cloud hosting that prefers static files first. Like Firebase or Netlify.

Note: in order to test the behavior, keep the Network tab open, and turn off JavaScript as well. You will spot the 301 right at the top.

What happens is that it looks for the physical file, before it serves the ssr serverless function (or the general rewrite to index file if you are not using SSR). The default behavior is to add a trailing slash when it finds the index.html.

Firebase hosting configuration: trailingSlash can take care of this issue.

This displays /route/index.html as /route, without a 301. But it would redirect /route/ to /route with a 301. If you never use /route/ anywhere, not in your sitemaps, nor inline links, nor when you share on social media, you should be fine. If however it still bugs you, there is another solution to put this to rest, that solution works well in Express servers as well. We will discuss this solution in the next episode.

Physical file preference will kick in first, before it runs the netlify.toml hosting file. The default is to add the / if it finds an index.html. According to their documentation there is a way to unify all links to have a trailing slash. In an Angular app, this is not what we are looking for. It rather is the other way around.

There is another default behavior of Netlify: to look for /route.html if user browses to /route. And that is what we want. In fact, that is the only way it's done on Netlify. The solution then is to rewrite our prerender function to generate /route.html instead of /route/index.html. This also will be covered in the next episode along with Express server solution.

Note: Netlify documentation states that you need to enable Pretty Urls to make use of this behavior. I tried it. It works without tampering with settings.

Stay tuned for the next episode coming soon.

Ayyash
sekrab: a small piece or amount of something, especially one that is left over after the greater part has been used.
The Journey is inevitable, baggage optional
#webdev #startup #discuss
Why building small apps with a long-term mindset is a bad idea
#webdev #productivity #discuss #startup
Five tools and resources for Web that survived information overload
#webdev #design #html #productivity

Once suspended, ayyash will not be able to comment or publish posts until their suspension is removed.

Once unsuspended, ayyash will be able to comment and publish posts again.

Once unpublished, all posts by ayyash will become hidden and only accessible to themselves.

If ayyash is not suspended, they can still re-publish their posts from their dashboard.

Once unpublished, this post will become invisible to the public and only accessible to Ayyash.

Thanks for keeping DEV Community 👩‍💻👨‍💻 safe. Here is what you can do to flag ayyash:

Unflagging ayyash will restore default visibility to their posts.