Daily Coding Problem is a website which will send you a programming challenge to your inbox every day. I want to show beginners how to solve some of these problems using Java, so this will be an ongoing series of my solutions. Feel free to pick them apart in the comments!

An XOR linked list is a more memory efficient doubly linked list. Instead of each node holding next and prev fields, it holds a field named both, which is an XOR of the next node and the previous node. Implement an XOR linked list; it has an add(element) which adds the element to the end, and a get(index) which returns the node at index.

If using a language that has no pointers (such as Python), you can assume you have access to get_pointer and dereference_pointer functions that converts between nodes and memory addresses.

Spoilers! Don't look below unless you want to see my solution!

So, first, I need to understand what a doubly-linked list is. So I read the Wikipedia article and the way I understand it is this:

You can visualise the differences between these kinds of lists like so: 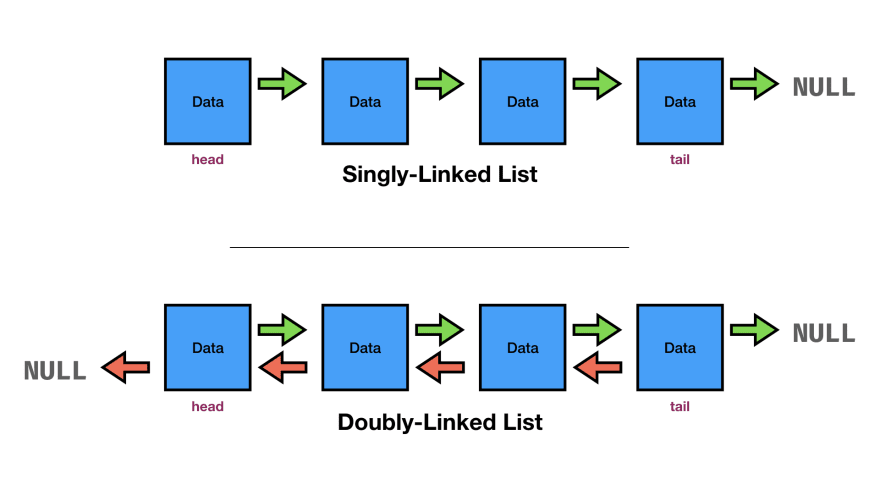 Next... what's an XOR list? The prompt sort of explains the concept, but I'm not sure I understand it. I'll come back to this in a bit.

I found this SO answer which explains the pros and cons of doubly-linked lists fairly well. It also gives a good explanation of why we might want to use one. If I may paraphrase...

In a "true" singly-linked or doubly-linked list, we hold two objects:

A pointer is simply another variable which holds a memory address. As an example, let's say we have a doubly-linked list of C-language ints, which are 4 bytes in length. Pointers in C on a 64-bit machine will be 8 bytes long, so each element of our list requires 20 bytes, for the int and the two pointers.

Let's suppose the first element of the list is at the address 0x9A7D...

...then the next element will be offset by 20 bytes (assuming the elements of the list are stored in a contiguous block of memory, which may not be the case), at

Similarly, the "previous" address will be offset by 20 bytes in the opposite direction for all elements of the list except this first one. Since the first element has no "previous" address, there will be some indicator that there is no element there (probably a null pointer to memory address 0x0):

In C, we obviously won't work directly with these bytes. Instead, we'll have something like:

...but how on earth could we implement this in Java? Java borrows a lot of syntax from C/C++, but it has no structs. So in Java, we might instead have:

Java also has no pointers, but remember that the prompt states:

If using a language that has no pointers (such as Python), you can assume you have access to get_pointer and dereference_pointer functions that converts between nodes and memory addresses.

Java, designed to be a "safe" language, does not allow you to mess around with memory addresses. So the get_pointer and dereference_pointer methods are purely imaginary. From the prompt description, they should have type signatures like:

...which convert the DLL object into a pointer containing its address in memory and vice versa. The problem suggests doing something along the lines of:

This is ugly. It's also invalid Java syntax. It's useless in real life. I don't think it's worthwhile to continue this hypothetical solution.

Instead of following the prompt to the letter, let's reinterpret it a bit so we can actually capture the spirit of XOR linked lists in Java.

We could try to use java.lang.instrument to determine the sizes (in bytes) of objects in Java, but this approach yields unintuitive results (all Strings are the same size) which aren't useful for our purposes (knowing the actual size in memory of an object).

Instead, let's simulate memory addresses. Java allows for hexadecimal literals, and (by default) converts them to decimal when they're printed:

So we can create a method that "allocates" a memory address for a new object, given the size of the object. We can keep track of which "memory locations" are being used so we don't accidentally "overwrite" old data. Then, we can finally implement the XOR-linked list (which will be explained during its implementation) in Java.

To start, let's create a simple Memory class in Java:

This class has three functions: intToAddress(), which takes any int value as an argument and converts it to a hex address String, addressToInt(), which performs the inverse, and randomAddress(), which generates a random address String. The GitHub repository which hosts this code adds some bounds checking and comments.

...which return the maximal values for addressToInt():

Note that my implementation of "maximum" and "minimum" hexadecimal values is different than Java's, which wrap at 0x7FFFFFFF / 0x80000000. I rearranged so that the minimum hexadecimal value corresponds to the lowest memory address, which I think is a bit more intuitive.

Next, we need to "allocate memory" when we create a new object (in this case, our doubly-linked list object). When we do this, we need to specify the amount of memory we need. Let's create a malloc-like function for Memory:

This, of course, is an extremely simple and inefficient way of allocating memory. There are better solutions, but they require a bit more work. Let's use this simple solution for now. Finally, we need a way to "register" memory so we don't accidentally overwrite an object with another one.

The above, of course, doesn't really work, as we don't check in malloc that memory is registered or not. To have a fully-working, robust solution, we would need a much more complex memory-allocating engine. But anyway, this is probably enough to play around a bit:

Finally we can start to talk about XOR-linked lists.

Recall the definition of a doubly-linked list from earlier:

We can add methods to get and set the addresses of the next and prev (previous) nodes in the list:

Finally, we need a way of "allocating memory" for these objects, assigning them a memory address, and "dereferencing" that address. For our DoublyLinkedList and Node classes to access our Memory class, we need to package them into a *.jar. I'll create a Maven project with all of this code. Then, we can expand the DoublyLinkedList object...

Now, we can use Node.ptr() to get the "address" of a Node element, and "dereference()" addresses to get the objects they refer to (note that I also @Override the default toString() methods for Node and DoublyLinkedList):

Overriding toString(), I have each Node give its address, as well as the addresses of the next and prev Nodes on the first line, and their values on the second line:

With an XOR-linked list, instead of holding both the prev and next addresses, we hold the XOR of those addresses:

XOR-linked lists cannot allow random access. We must start at either the beginning or the end of the list and work our way down the list. If we start with the first Node of our above list, for instance:

The above Wikipedia quote notes that we need the address of the previous element as well as both to traverse the list:

We can see that we need the previous address and the XOR both to get the next address, or the next address and the XOR both to get the previous address. We don't have to store two addresses in each Node, but we do need to keep track of the address of that previous Node somewhere. All in all, this is quite a clunky data structure with little benefit. It may have been more useful in the early days of computing, when memory was at a premium, but it's probably best to avoid it now. (Not to mention that it's actually impossible to implement in Java.)

This was an interesting exercise, but mostly for reasons that had nothing to do with the actual prompt. Learning about hexadecimal literals in Java, converting between them and integers, implementing a fake 4GB storage space with a NULL address, faking pointers and dereferencing... this was all really interesting and informative. XOR-linked lists? Not as much.

In the future, I might try to re-implement my fake memory space with a better malloc. I think this would be a really informative challenge. What do you think?

All the code for my Daily Coding Problems solutions is available at github.com/awwsmm/daily.

Suggestions? Let me know in the comments.

Roadmap to being a Full Stack Web Developer

How to make a Flip Card?