AWS App2Container (A2C) is a command-line tool for modernizing .NET and Java applications into containerized applications. A2C analyzes and builds an inventory of all applications running in virtual machines, on-premises, or in the cloud.

Red Hat OpenShift Service on AWS (ROSA) provides an integrated experience to use OpenShift. If you are already familiar with OpenShift, you can accelerate your application development process by leveraging familiar OpenShift APIs and tools for deployments on AWS.

Amazon Aurora is a MySQL and PostgreSQL compatible relational database engine that combines the speed and availability of high-end commercial databases with the simplicity and cost-eﬀectiveness of open source databases.
Amazon Aurora is up to five times faster than standard MySQL databases and three times faster than standard PostgreSQL databases. It provides the security, availability, and reliability of commercial databases at 1/10th the cost.

Amazon DynamoDB is a key-value and document database that delivers single-digit millisecond performance at any scale. It's a fully managed, multi-region, multi-master database with built-in security, backup and restores, and in-memory caching for internet-scale applications.

Amazon ElastiCache is a web service that makes it easy to deploy, operate, and scale an in-memory cache in the cloud. The service improves the performance of web applications by allowing you to retrieve information from fast, managed, in-memory caches, instead of relying entirely on slower disk-based databases.

Amazon Relational Database Service (Amazon RDS) makes it easy to set up, operate, and scale a relational database in the cloud. It provides cost-efficient and resizable capacity while automating time-consuming administration tasks such as hardware provisioning, database setup, patching and backups.

Amazon Quantum Ledger Database (QLDB) is a fully managed ledger database that provides a transparent, immutable, and cryptographically verifiable transaction log ‎owned by a central trusted authority. Amazon QLDB tracks each and every application data change and maintains a complete and verifiable history of changes over time.

Amazon Timestream is a fast, scalable, fully managed time-series database service for IoT and operational applications that makes it easy to store and analyze trillions of events per day at 1/10th the cost of relational databases. 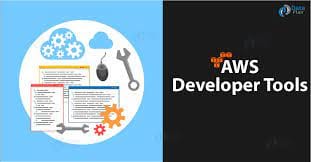 Amazon Corretto is a no-cost, multiplatform, production-ready distribution of the Open Java Development Kit (OpenJDK). Corretto comes with long-term support that will include performance enhancements and security fixes.

AWS Cloud9 is a cloud-based integrated development environment (IDE) that lets you write, run, and debug your code with just a browser. It includes a code editor, debugger, and terminal.

AWS CloudShell is a browser-based shell that makes it easy to securely manage, explore, and interact with your AWS resources. CloudShell is pre-authenticated with your console credentials. Common Development and operations tools are pre-installed, so no local installation or configuration is required.

AWS CodeArtifact is a fully managed artifact repository service that makes it easy for organizations of any size to securely store, publish, and share software packages used in their software development process.

AWS CodeBuild is a fully managed build service that compiles source code, runs tests, and produces software packages that are ready to deploy. With CodeBuild, you don’t need to provision, manage, and scale your own build servers.

AWS CodeDeploy is a service that automates code deployments to any instance, including EC2 instances and instances running on premises.

AWS CodePipeline is a fully managed continuous delivery service that helps you automate your release pipelines for fast and reliable application and infrastructure updates.

AWS CodeStar enables you to quickly develop, build, and deploy applications on AWS. AWS CodeStar provides a unified user interface, enabling you to easily manage your software development activities in one place.

AWS Fault Injection Simulator is a fully managed service for running fault injection experiments on AWS that makes it easier to improve an application’s performance, observability, and resiliency.

AWS X-Ray helps developers analyze and debug distributed applications in production or under development, such as those built using a microservices architecture.

Once suspended, awsmenacommunity will not be able to comment or publish posts until their suspension is removed.

Once unsuspended, awsmenacommunity will be able to comment and publish posts again.

Once unpublished, all posts by awsmenacommunity will become hidden and only accessible to themselves.

If awsmenacommunity is not suspended, they can still re-publish their posts from their dashboard.

Once unpublished, this post will become invisible to the public and only accessible to ‪Kareem Negm‬‏.

Thanks for keeping DEV Community safe. Here is what you can do to flag awsmenacommunity:

Unflagging awsmenacommunity will restore default visibility to their posts.