Amazon Elastic Container Registry (ECR) is a system designed to support storing and managing Docker and Open Container Initiative (OCI) images and OCI-compatible artifacts. ECR can act as a private container image repository, where you can store your own images, a public container image repository for managing publicly accessible images, and to manage access to other public image repositories. ECR also provides lifecycle policies, that allow you to manage the lifecycles of images within your repository, image scanning, so that you can identify any potential software vulnerabilities, and cross-region and cross-account image replication so that your images can be available wherever you need them.

As with the rest of AWS services, ECR is built on top of other services. For example, Amazon ECR stores container images in Amazon S3 buckets so that server-side encryption is available by default. Or, if needed, you can use server-side encryption with KMS keys stored in AWS Key Management Service (AWS KMS), all of which you can configure as you create the registry. As you can likely guess, IAM manages access rights to the images, supporting everything from strict rules to anonymous access to support the concept of a public repository. 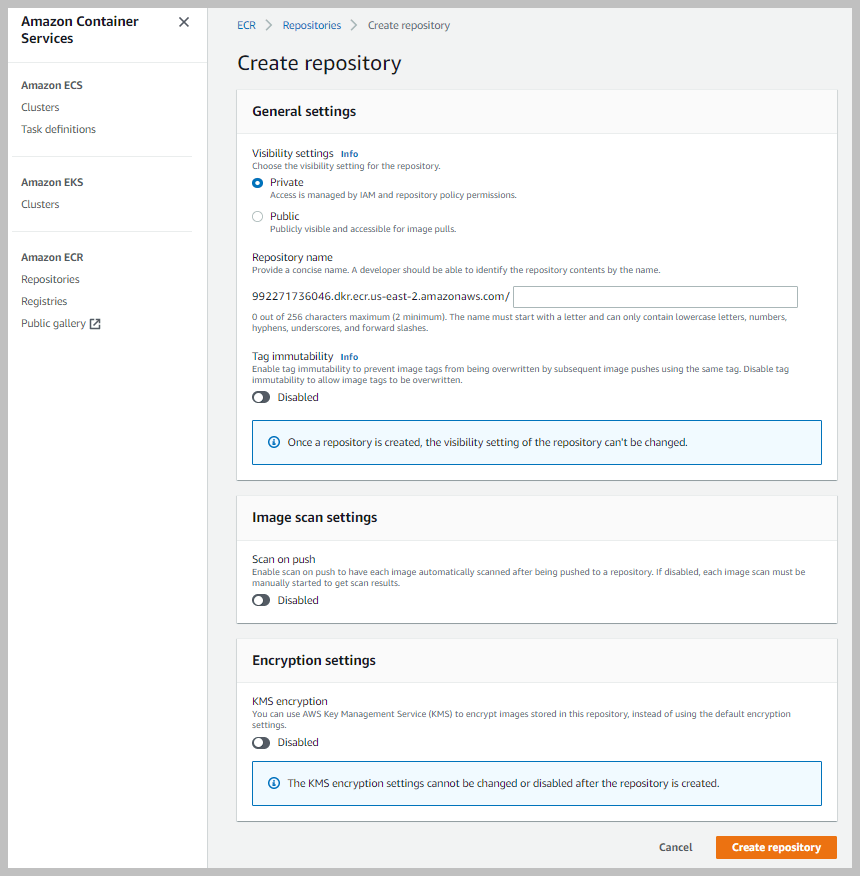 Figure 1. Creating an ECR repository in the AWS console

Enabling Scan on push on means that every image that is uploaded to the repository will be scanned. This scanning is designed to help identify any software vulnerabilities in the uploaded image, and will automatically run every 24 hours, but turning this on will ensure that the image is checked before it can ever be used. The scanning makes use of the Common Vulnerabilities and Exposures (CVEs) database from the Clair project, outputting a list of scan findings.

Note: Clair is an open-source project that was created for the static analysis of vulnerabilities in application containers (currently including OCI and Docker). The goal of the project is to enable a more transparent view of the security of container-based infrastructure - the project was named Clair after the French term which translates to clear, bright, or transparent.

The last section is Encryption settings. When this is enabled, as shown in Figure 2, ECR will use AWS Key Management Service (KMS) to manage the encryption of the images stored in the repository, rather than the default encryption approach.

You can use either the default settings, where ECR creates a default key (with an alias of aws/ecr) or you can Customize encryption settings and either select a pre-existing key or create a new key that will be used for the encryption.

Everything we have gone through so far is to upload your own container image into the repository. However, as we will cover in depth a bit later in this post, at the heart of virtually all of your container images is a base container image, generally created by a vendor such as Microsoft or Docker. These base images are typically downloaded from a public repository. However, there may be instances where you prefer to source all images from Amazon Elastic Container Registry to take advantage of its high availability and security. If so, the pull-through cache repositories may be just what you are looking for as they will pull down referenced images from the source and cache them within ECR.

Note: The pull-through cache repository feature was added for re:Invent 2021 so the available public repositories are gradually being added. It is possible that the repository that you may want to pass-through from is not yet available. 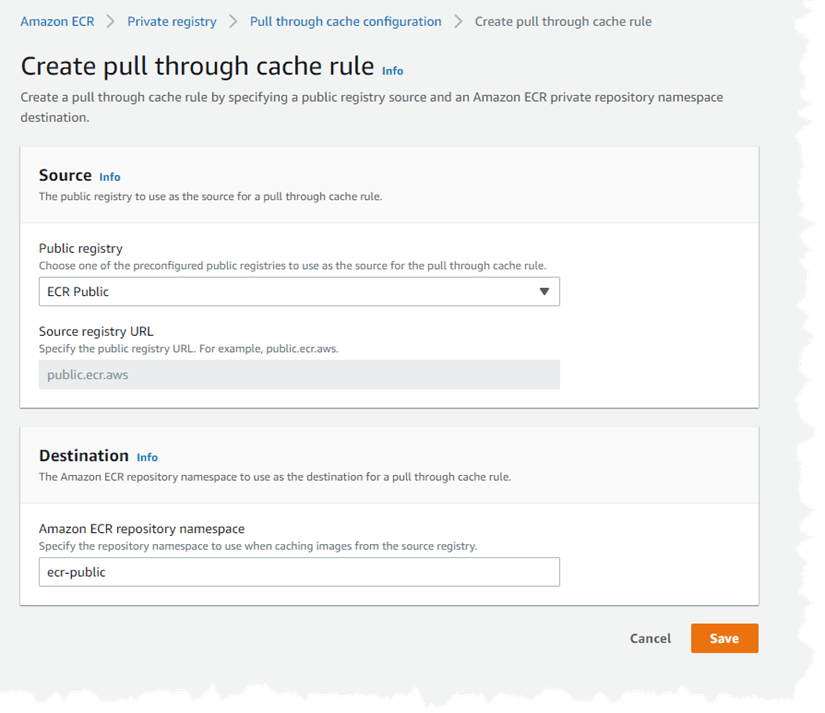 Figure 3 Creating a pull through cache

The first drop-down, Public registry, contains all the pre-configured public registries available; as you can see we selected ECR Public. Clicking the Save button will bring you back to the list of pull-through cache rules.

Since this is a pass-through, you need to combine both the pass through url and the referenced source when using a pull URL using the format of .dkr.ecr..amazonaws.com// :. If you look into a container image definition you may see the following lines:

Using the pull-through cache means that, if you were going to use the ASP.NET Core base image from Bitnami that is available from the ECR Public repository, you would change the FROM command to reference the pull through source, as shown below.

Be aware that this is more than a simple pull-through, as the image that you reference will be cached in ECR so that additional calls to that same image will not have to go to the final source repository. This means that the storage used will be charged to your account.

Other approaches for creating an ECR repo

Just as with all the other services that we have talked about so far, there is the UI-driven way to build an ECR like we just went through and then several other approaches to creating a repo.

You can create an ECR repository in the AWS CLI using the create-repository command as part of the ECR service.

And, as you probably aren’t too surprised to find out, you can also create an ECR repository using AWS Tools for PowerShell:

Just as with the CLI, you have the ability to fully configure the repository as you create it.

When using the AWS Toolkit for Visual Studio you must depend upon the extension’s built-in default values because the only thing that you can control through the AWS Explorer is the repository name as shown in Figure 4. As you may notice, the AWS Explorer does not have its own node for ECR and instead puts the Repositories sub-node under the Amazon Elastic Container Service (ECS) node. This is a legacy from the past, before ECR really became its own service, but it is still an effective way to access and work with repositories in Visual Studio. 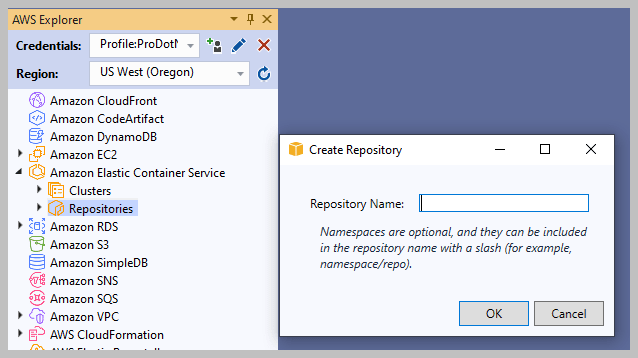 Once you create a repository in Visual Studio, going to the ECR console and reviewing the repository that was created will show you that it used the default settings, so it is a private repository with both “Scan on push” and “KMS encryption” disabled.
At this point, the easiest way to show how this will all work is to create an image and upload it into the repository. We will then be able to use this container image as we go through the various AWS container management services.

Note: You will not be able to complete many of these exercises without Docker installed on your machine. You will find download and installation instructions for Docker Desktop at https://www.docker.com/products/docker-desktop. Once you have Desktop installed you will be able to locally build and run container images.

We will start by creating a simple .NET ASP.NET Core sample web application in Visual Studio through File -> New Project and selecting the ASP.NET Core Web App (C#) project template. You then name your project and select where to save the source code. Once that is completed you will get a new screen that asks for additional information. The checkbox for Enable Docker defaults as unchecked, so make sure you check it and then select the Docker OS to use, which in this case is Linux. This will create a simple solution that includes a Dockerfile as shown in Figure 5. 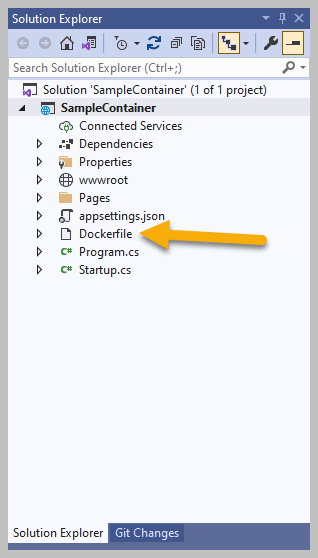 If you look at the contents of the generated Dockerfile you will see that it is very similar to the Dockerfile that we walked through earlier, containing the instructions to restore and build the application, publish the application, and then copy the published application bits to the final image, setting the ENTRYPOINT.

If you look at your build options in Visual Studio as shown in Figure 6 you will see additional ones available for containers. The Docker choice, for example, will work through the Dockerfile, start the final container image within Docker, and then connect the debugger to that container so that you can debug as usual. 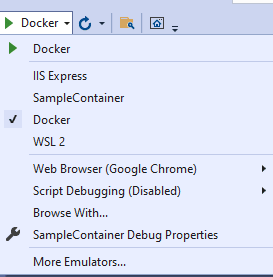 Note: If you want to see what is going on within the container build process, go to the output window, change the Show output from drop-down to Container Tools and then debug the application in Docker. You will see Docker commands being processed.

The next step is to create the container image and persist it into the repository. To do so, right click the project name in the Visual Studio Solution Explorer and select Publish Container to AWS to bring up the wizard as shown in Figure 7. 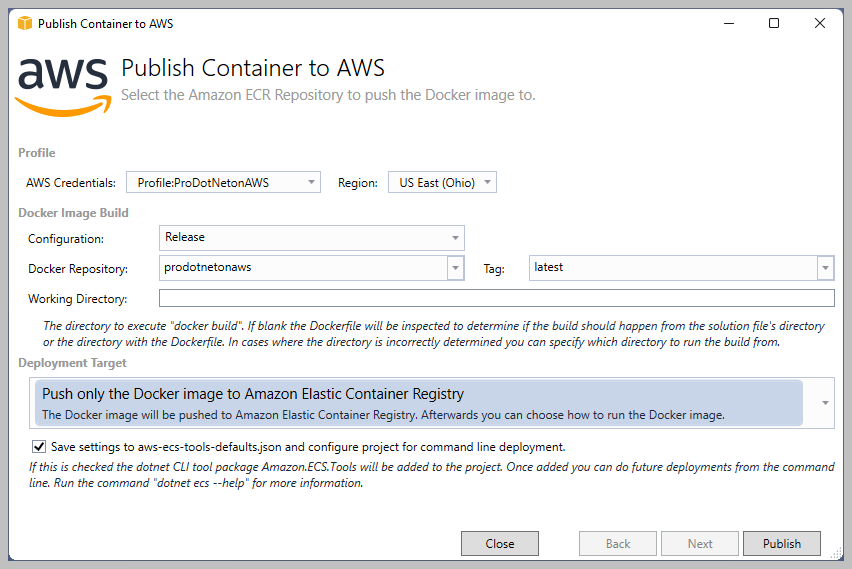 Figure 7 shows that the repository that we just created is selected as the repository for saving, and the Publish only the Docker image to Amazon Elastic Container Registry option in the Deployment Target was selected (these are not the default values for each of these options). Once you have this configured, click the Publish button. You’ll see the window in the wizard grind through a lot of processing, then a console window may pop up to show you the actual upload of the image, and then the wizard will automatically close if successful.

You can see the new repository in Visual Studio as well as by logging into Amazon ECR and going into the prodotnetonaws repository (the one we uploaded the image into), as shown in Figure 8, will show that there is now an image available within the repository with a latest tag, just as configured in the wizard. You can click the icon with the Copy URI text to get the URL that you will use when working with this image. We recommend that you go ahead and do this at this point and paste it somewhere easy to find as that is the value you will use to access the image.

Now that you have a container image stored in the repository, in the next post, we will look at how you could use it!

Getting Started with the ASP.NET Core AutoComplete Control

Economies of scale in the cloud