Before diving into Virtual Private Cloud concepts useful for the exam, let's start with the main concepts/components of AWS Global Infrastructure, in regards with closeness to the end user, and where our resources resides - on-premises or in the cloud.

Also some introductory concepts as IP Addressing, CIDR Blocks and Subnetting is necessary to understand how to properly configure a VPC:

An IPv4 address is 32 bits long (4 octets ): this means there are 4.3 billion addresses available which are going to be soon exhausted.

The first 3 binary octects are Network Id, while the last one is the Host ID
Different Computers on same Network will have same NetworkId, ( like 192.168.0) but have unique HostIDs. 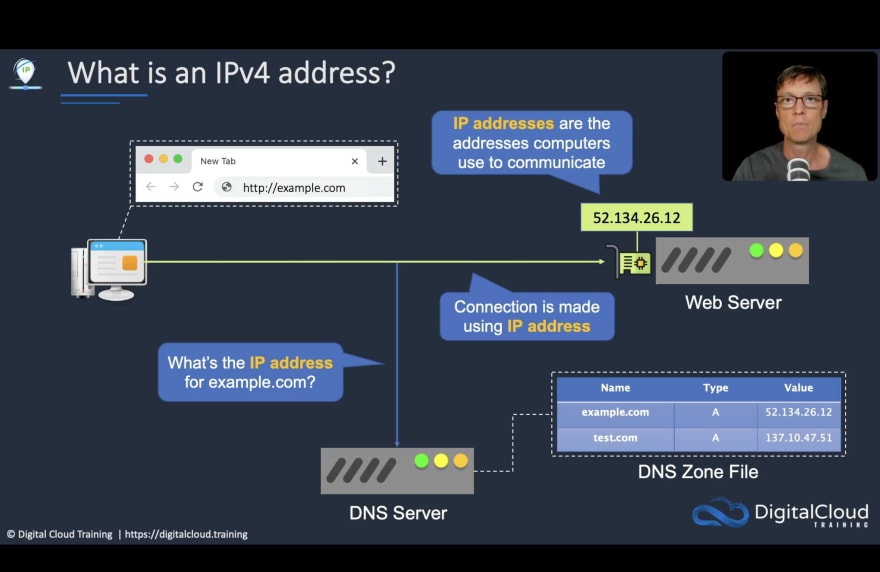 IPv6 addresses are 128 bits long and use hexadecimal instead of dotted decimal.

When using IPv6 for VPC CIDR Block AWS will provide a /56 CIDR block from their own pool.

All IPv6 addresses are publicly routable and no NAT is necessary. If we want to allow only outbound traffic, we can use egress-only internet gateway.

Subnetting is the process of splitting a CIDR (Classless InterDomain Routing ) block into smaller blocks. 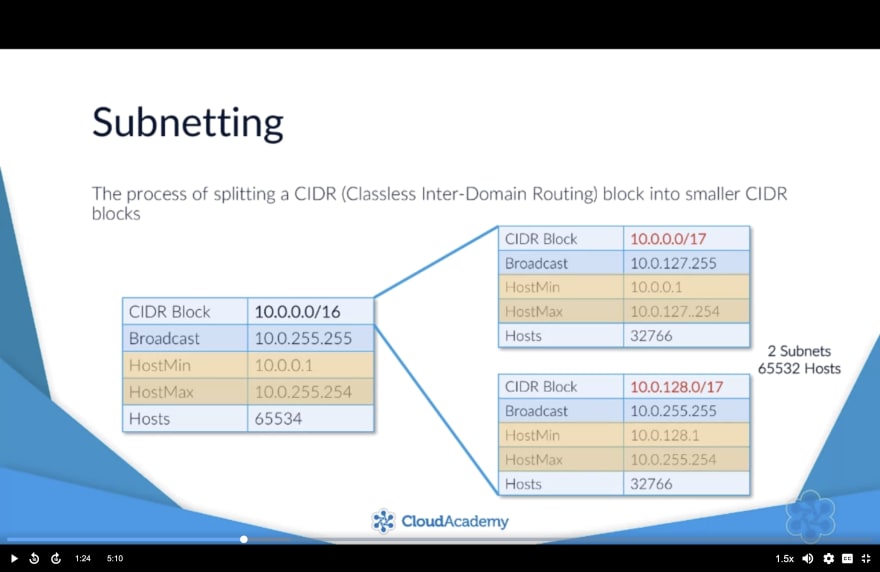 When you create a VPC you are required to enter a CIDR block range.
A lot of consideration must be put when choosing the CIDR block, because we need to ensure there will be enough IP addresses for our instances within each subnet, and because, as we see later, CIDR block should never overlap. 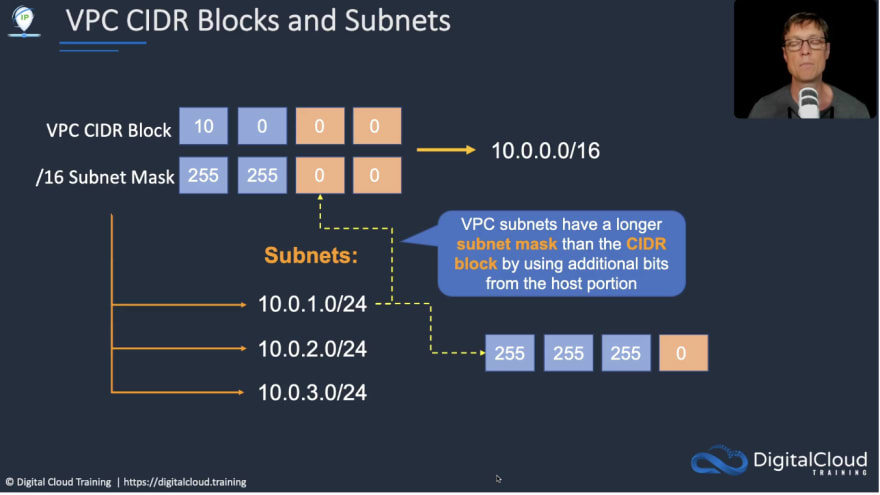 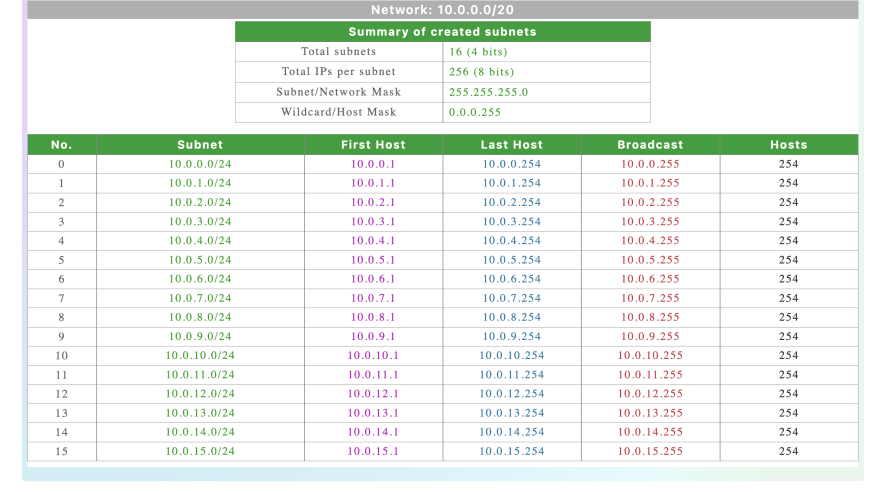 If you want to dig more into this topic this is one of the best articles about VPC Design / CIDR Blocks and Subnetting I have ever read. Highly suggested.
Also these tools proved very useful to better understand these CIDR Blocks and masks: 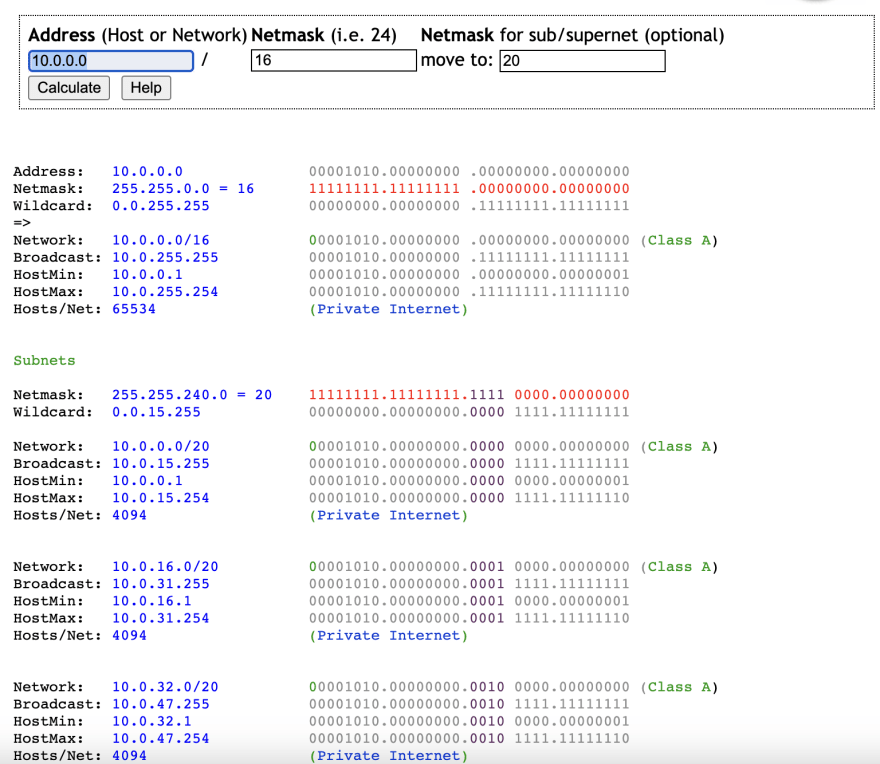 What is a VPC?

A VPC is a logically isolated portion of AWS cloud within a region.

Each VCP has a different CIDR, it is like having your own data center inside AWS.
By default you can create up to 5 VPCs per region per AWS account.

Components of a VPC

-Subnet : A segment of IP address range within the VPC where you can place groups of isolated resources
-Internet Gateway: VPC side of the connection to public internet -
-NAT Gateway: highly available, managed Network Address Translation service to resources in private subnets that need access to internet (check here for more info)
-Peering connection: enables traffic routing via private IP addresses between 2 VPCs
-VPC Endpoints: enable private connectivity to services hosted in AWS from the VPC ( without using Internet Gateway, VPN, NAT etc)
-Egress Only Internet Gateway : Stateful gatway that allows egress only access for IPv6 traffic (only outbound )
-Hardware VPN Connection: Hardware-based VPN connection between your datacenter / location and the VPC.
-Virtual Private gateway and Customer Gateway: one is the Amazon side of a VPN connection, while the other is ..well.. the customer side of it.
-Router: via route tables we can map interconnections between subnets and map direct traffic between gateways and subnets.

When you first create a public and a private subnet and all subnets will have a local route, so they look absolutely the same.
In order for a Public Subnet to be Public and have access to the internet:

Each subnet can only be associated with one route table, so that traffic can be routed within the VPC or to the internet.

Subnets are created within AZ, by having a multi-tier application and placing multiple subnets into different AZ you can set up Highly Available and resilient Architectures. 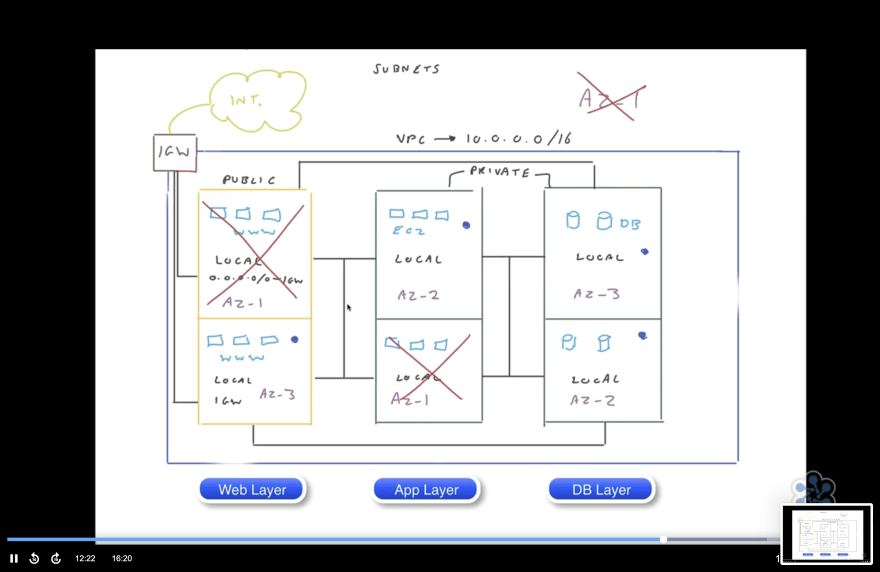 A security group acts as a virtual firewall on your Instances controlling incoming and outgoing (with inbound and outbound rules) traffic.
Since Security Groups apply at the instance level the same security group can be applied to instances in different subnets.

Security groups are stateful, this means that traffic as response is allowed to return automatically ( without the need of processing rules).

Network Access Control Lists, aka Network ACLs, aka NACLs,
apply to the traffic at the subnet level, entering or exiting the subnet. It will apply to all instances in the subnet, but not to a group of EC2 instances (in different subnets).

NACLs are stateless therefore a rule check is applied for both connections (request & response).

NACLs deny all inbound and outbound traffic by default, but support both allow and deny rules.

NACLs do not apply to traffic within the subnet.

Pay attention to the Rules Order, Rules are evaluated from top to bottom, and whatever does not match a rule will be evaluated by the next one. That means that if you have a Rule that allows everything and then a rule that denies , the denies will not work..

Since Security Groups can't block specific ranges of IPs, NACLS are the preferred option in this scenario.

Depending on your current network designs and requirements (like across VPCs or between VPC and your network/VPN), you have several ways of connecting to a VPC

A VPC peering connection is a networking connection between two VPCs. Instances in either VPC can communicate with each other as if they are within the same network.
Traffic always stays on the global AWS backbone, and never traverses the public internet.
There is no single point of failure for communication or a bandwidth bottleneck. from the docs

Transitive Peering does not work.
VPC Peering is a 1-1 connection, if we need peering connection among multiple VPCs, we need multiple VPC peering (one for each pair of VPC we want to connect)

In the picture above VPC B and VPC cannot communicate because they don't have they own VPC Peering.

When we have lots of VPCs and different on-prem networks, things can get very complicated and expensive.
AWS Transit Gateway provides full transitive routing among VPCs across regions. 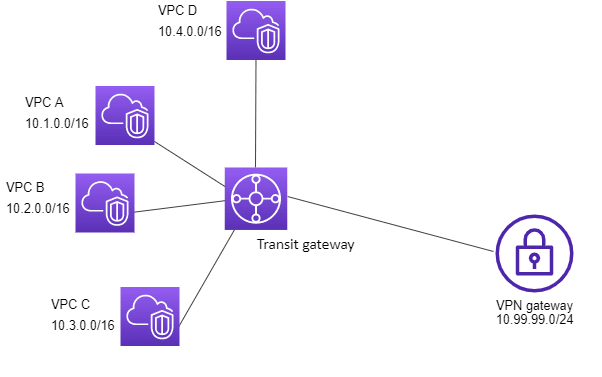 Data is automatically encrypted and never travels over the public internet.

For example, this Bucket Policy will Deny all actions on the bucked unless the request is coming from the VPC

alternatively, you can have a bit broader policy allowing access not only from that specific VPC endpoint but from the entire VPC

Be careful when trying this out, because after setting that bucket policy you will not have access to the bucket anymore, ( nor from your computer neither from your AWS UI Console ). to restore access you have to login to your root account and delete the bucket policy. see here

AWS Client VPN allows you to access your AWS resources inside a VPC (like instances using private IP Address) from you local network) with an encrypted connection.

The VGW (Virtual Gateway) is attached to the VPC and then it can communicate with the Customer Gateway via VPN Tunnel.

WS Direct Connect uses private network connections into the AWS Cloud and is high-bandwidth and low-latency.

Direct Connect does allows connection with a Region, not only to a VPC ( using virtual gateway - VGW) to private subnets, but to any other AWS resource (like S3 Buckets)

Cons are that it is costly and requires additional telecom and hosting provider relationships; also, traffic in transit is NOT encrypted by defaultand if you need encryption you will need an IPSec S2S VPN connection over a VIF (Virtual Interface).

When you want multiple Remote Offices to connect to a VPC or AWS Resources in a hub and spoke model.

Hub and Spoke model is a distribution model that, as opposed to Point2Point, has not direct communication among different points in the system, rather everything has to go to a central hub and is then forwarded to the other spoke.

The cool thing about this architecture is that you can reuse existing Internet connections - each remote office will have its own Customer Gateway and can communicate with each other via the Virtual Private Gateway. The main con is that, it is dependent on internet connections and has no inherent redundancy.

You can use Site2Site VPN to establish a routing topology among Customer Offices and VPC itself. 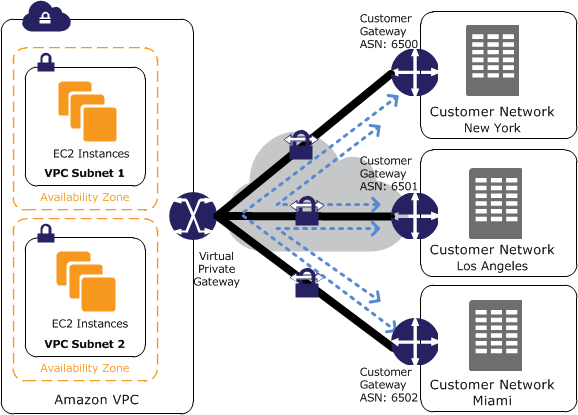 As a final topic, it is interesting to know that traffic information flowing to and within your VPC can be logged using VPC Flow Logs.

VPC Flow Logs allows you to capture IP traffic information that flows between your Network Interfaces of your resources within your VPC.
This is useful to help resolve incidents with network communication and for security purposes like spotting traffic from or to destination that are not allowed.

Logs are saved to CloudWatch or S3.
Flow Logs can be set up against:

DHCP traffic and traffic that goes to Route53 is excluded from monitoring.

Photo by Alexander Grey on Unsplash

The AWS DevOps Professional Exam is Exhausting! And Why You Don't Want To Repeat It

Blue/Green Deployments for RDS: How Fast is a Switchover?