AWS Global Infrastructure at the high level were distributed as Regions. Region is a physical location in the world like Ireland, London, Singapore etc. Each region is further composed of Availability Zones (AZ). Availability Zones (AZ) are nothing but discrete data centers. For example, if Singapore is the region, then within that region, then AWS might have 3 different data centers located in the East, West, South of Singapore, that are isolated from one another. So if there is a power outage or accidental fire in one data center, the other data center will continue to operate without causing any disruption.

Having defined the regions and availability zones, the following diagram helps to fit VPC in the global infrastructure. Amazon VPC is the virtual network is created in a specific region that spans across multiple Availability Zones. 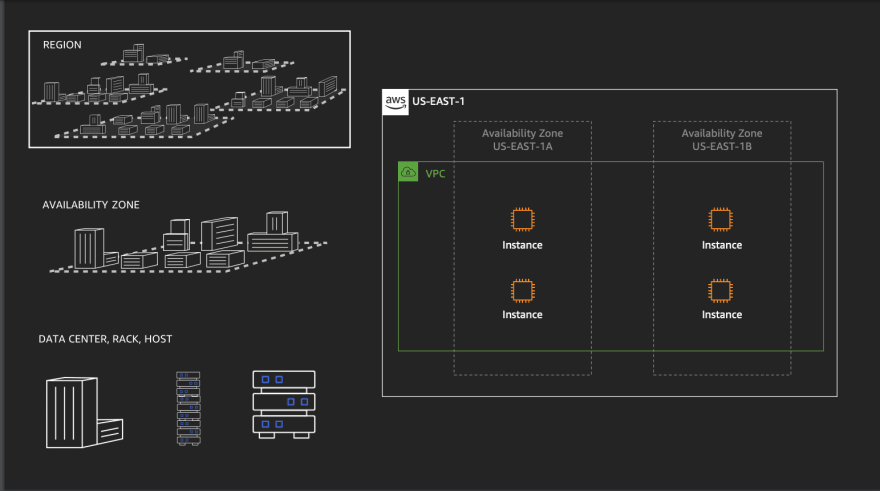 So when an instance has to be created inside the VPC, it can be chosen to host them in any of the availability zones inside the region. The instance is the physical server that has an IP address and are physically placed inside a data center (Availability Zone).

To create a VPC, we need to define the CIDR Block IP range. This defines the number of instances that a VPC can have. Since this is at the VPC level, the IP addresses can span across multiple AZ. 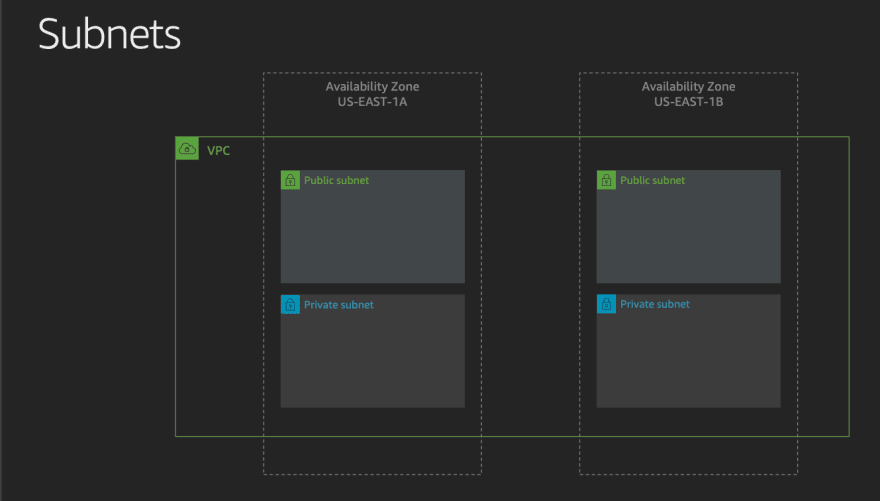 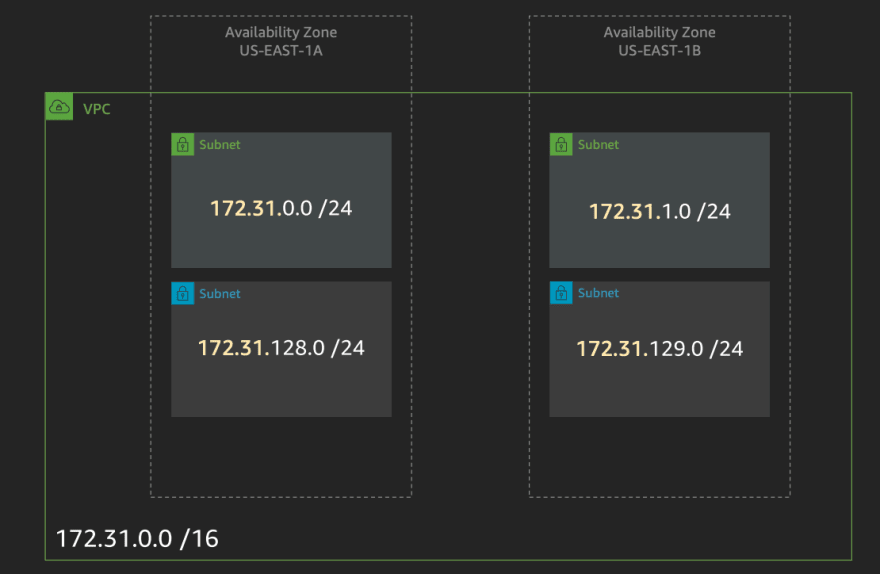 The picture shows that in an availability zone, we have created two subnets (private and public). As the name suggests, one subnet will allow internet access and the other will not. The traffic configuration has to be defined to make them public and private.

It a very common real-world scenario for hosting a web application. The instances acting as web-servers are public and should be reachable via HTTP (Port 80) and HTTPS (Port 443) traffic, but the database instances or application servers will not be accessible to internet but only to web-servers. As shown in the diagram below, we can define two security groups namely Web Server Security Group and App Server Security Group. 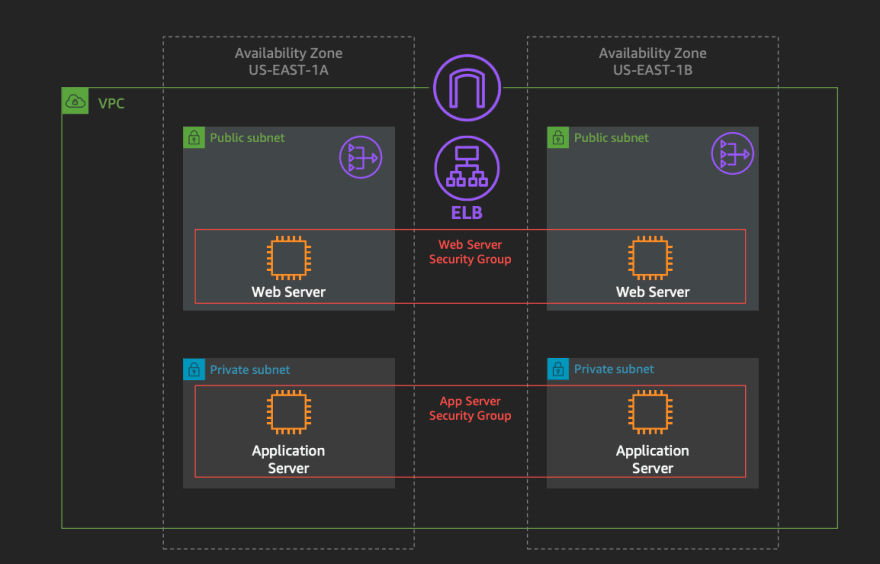 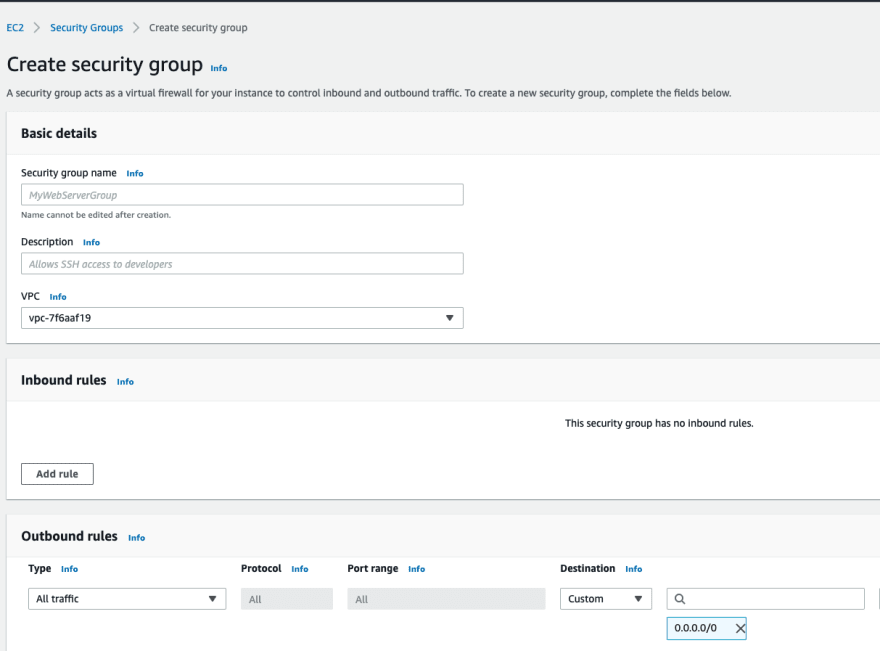 It is similar to the security group which defines network access inside the VPC but this operates at the subnet level. If we were to define common traffic rule across the subnet, we define in NACL. Following is the configuration for the default NACL created inside the default VPC. Here we can see the subnet associations in the third tab.

Route tables is like a traffic controller to the subnet in the VPC and contains rules for which packets to go where. It is more like a directory of what are all the possible routes that can happen within the subnet. Often times, I confuse route table with NACL because both are associated with the subnet.

A sample route table looks like below for a public subnet. If the VPC was set up to have the address space of 172.16.0.0/16, the local route defined as 172.16.0.0/16 allows all of the resources created within the VPC to talk to each other without any additional configuration. The next configuration is the IPv6 config inside the VPC to talk to each other. Creating a config 0.0.0.0/0 and attaching the target to the Internet Gateway (This has to be created ahead of configuring it in the route table) makes any subnet that is attached to this route table public because it has access to internet.

To get to the internet, go via Internet Gateway

To get to anything inside the VPC - stay local. No route anywhere else 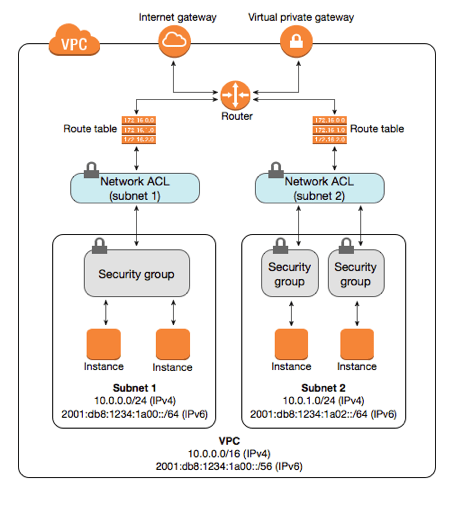 As the name suggests, this is the gateway to the public internet access. If we are hosting a web application, the web servers are usually public facing and be reachable via internet. In order to achieve this, we should first create an Internet Gateway and define the route in the route table. This allows internet traffic both to and from the instance.

A NAT gateway is a Network Address Translation (NAT) service. The NAT gateway can be used so that the instances in a private subnet can connect to services outside the VPC but external services cannot initiate a connection with those instances. For example to patch security updates. There are two types of NAT Gateway, Public and Private. Public as the name says will be connected to the internet (one-way) and Private Gateway is used to connect other VPCs. A public NAT gateway is created in a public subnet and will be associated with an elastic IP address.

Can you answer the following questions?

How To SSH Into An ECS Fargate Container

Once unpublished, this post will become invisible to the public and only accessible to Pradheepa P.