To begin using Amazon S3, you should be familiar with the terminology used for creating, accessing, and securing the data in your buckets. Use the arrows below, or choose START, to navigate through a brief introduction to Amazon S3 terminology, keys, values, metadata, and access control information.

What is an object?

An object is a file and any optional metadata that describes the file. To store a file in Amazon S3, you upload it to a bucket. When you upload a file as an object, you can set permissions on the object and any metadata 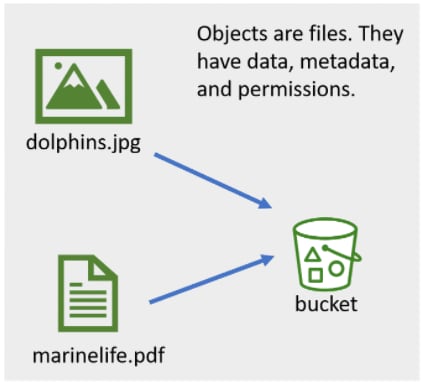 What is a Key?

When you create an object, you specify the key name. The key name uniquely identifies the object in the bucket. It is the full path to the object in the bucket.
In Amazon S3, there is no hierarchy, as you would see in a file system. However, by using prefixes and delimiters in an object key name, the Amazon S3 console and the AWS SDKs can infer hierarchy and introduce the concept of folders. You do not get actual folders, what you get is a very long key name. 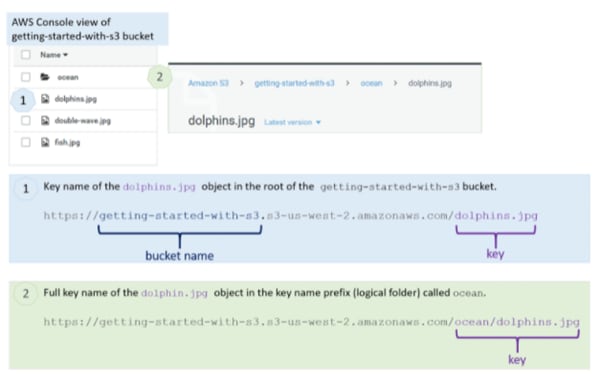 Versioning is a means of keeping multiple variants of an object in the same bucket. You can use versioning to preserve, retrieve, and restore every version of every object stored in your Amazon S3 bucket. You can easily recover from both unintended user actions and application failures. If Amazon S3 receives multiple write requests for the same object simultaneously; it stores all of the objects.
If you enable versioning for a bucket, Amazon S3 automatically generates a unique version ID for the object being stored. In one bucket, for example, you can have two objects with the same key, but different version IDs, such as the latest version of dolphins.jpg (version qNTCxBvI7p0pR39sw1sJhHyc59jx75HB) and the previous version of dolphins.jpg (version KWdgdZCncMiiPNs5LGHDz7zmf1QImseb).

Value (or size) is the actual content that you are storing. An object value can be any sequence of bytes, meaning it can be the whole object or a range of bytes within an object that an application needs to retrieve. Objects can range in size from zero to 5 TB. 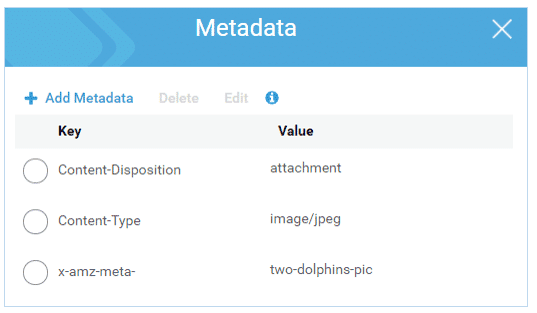 FIXD: Vehicle Sensor Health Monitor & Do You Need It?

How to think logically