Testing Gradle plugins can be challenging. It relies on a special-purpose framework, TestKit, that is only relevant for this singular use-case—so unless you've already heard of it, you wouldn't have heard of it. But now you definitely have, so welcome to the club! The other main challenge is grokking the nature of Gradle itself, which is that it's all about manipulating files. So much so, in fact, that an alternate title for this post may have been: Files all the way down.

One of the biggest hurdles to understanding Gradle (and, I suspect, build systems in general) is that the primary "abstraction" is the _file_. Everything is files. Good luck!

(any paradigms out there for a strongly-typed _filesystem_?)

I'm going to say it one more time because I think it's a critical point on the road to Gradle mastery. In these days of reactive programming, with streams of values chained together with functions operating on strongly-modeled data types—your build system operates on capital-F Files. Tasks write their outputs to the filesystem, other tasks read those files in, and terminal tasks generate distributable artifacts—jars, aars, apks, etc.—on the filesystem.

What has this got to do with testing Gradle plugins? Read on and see!

What to expect if you continue reading

This is an intermediate-level post that will demonstrate how to set up comprehensive testing infrastructure for a Gradle plugin. The techniques you'll see below are in use right now in CI pipelines used to validate the plugins that build industrial-scale software, for companies that earn billions in revenue on that back of that software. Perhaps more importantly for you as an individual, they form part of a core skillset that will make you seem like a very valuable wizard. Recruiters beware!

All the code below is available on Github.

Companion source for "Gradle all the way down" blog post

The plugin under test

While the focus of this post will be on how to test your Gradle plugins, we need something to test. Let's get that out of the way:

I don't intend to focus very much on this code, except to reiterate once again that our task's output is some text written to disk. Conceptually, most Gradle tasks should fall into the "pure function" bucket. That is, given a set of inputs, the task will perform some "heavy" computation, and then emit one or more outputs to disk. If the inputs are stable, then the outputs should be as well—if they're not, that's either a bug in Gradle or (more likely) a bug in your code.1 In our case, we happen to have a task that has no meaningful input, and so we annotate it with @UntrackedTask, an annotation available since Gradle 7.3. This serves as both documentation and also a flag to Gradle that it should skip input/output hashing, which has a positive performance impact.

We're going to follow a two-pronged testing strategy for this code. For demonstration purposes, we'll have some simple unit tests, both for our plugin and our DeepThought computational powerhouse. More importantly, we will setup a functional testing suite using TestKit that will invoke a real Gradle build and then validate the (file) output on disk. Along the way, we'll try to have some fun with testing frameworks and the filesystem.

You didn't think you'd be able to get away with reading a post about Gradle and not see a single build script, did you? The script below goes beyond the minimum necessary for setting up a basic TestKit test, but I've done so explicitly because I want the example to be closer to production code than a simpler example could manage. The code below would pass PR review on my team.

I have added somewhat verbose comments inline, but nevertheless I will go into some depth on a few items in just a moment.

The two most unusual aspects of this (I think!), are the testing block and the final block which sets up a compilation dependency between Groovy and Kotlin. Let's talk about the first, first.

The testing DSL is added by the JVM Test Suite Plugin, which is added automatically by the java plugin (which is added automatically by the java-gradle-plugin plugin). This plugin and its DSL are @Incubating, but I think it's worth giving a look thanks to two primary features: (1) the ease with which it lets build authors set up additional test suites, which has always been painful; and (2) the fact that it enables the Test Aggregation Report Plugin, which solves the vexing problem of aggregating test reports across multiple subprojects in a multi-project build. While we don't have a multi-project build in our sample scenario, I expect most of us work on multi-project builds.2

The final block, which sets up the dependency from compileFunctionalTestKotlin to compileFunctionalTestGroovy, is not strictly necessary but I've added it here because it's a useful concept. First, to answer the question that some of you have probably been screaming at me: yes, we will be writing a test in Groovy, using the Spock framework.

if I had to learn Groovy solely for the purpose of writing Spock tests, it would still be worth it. Blows every other test framework out of the water

I will die on this hill. That said, I respect the fact that many of my readers' first, last, and only language is Android-flavored Kotlin, so we're going to write the minimum amount of Groovy possible, and it'll be great, I promise.

For brevity, I will not discuss how the unit tests work in the sample repo. Instead, I encourage you to take a look if you're curious. Bottom line: exactly like you'd expect, with maybe the small exception that it uses JUnit5 rather than 4. I've included it primarily to demonstrate the possibility and utility of maintaining multiple test suites that each serve different purposes.

Below I include all of the Groovy code in this project.3 In my (perhaps controversial) opinion, Spock is a powerful, expressive, and Really Very Good framework. That said, I think this is also straightforward enough that if you really hated it, you could rewrite it in Kotlin and you'd only lose some of this expressiveness and power. I've included the import statements for clarity, since this test (or spec, as Spock prefers) makes use of two external libraries in addition to Spock itself, and some custom wiring code we'll go over in a moment.

This code lives at src/functionalTest/groovy.

There are three patterns embedded in the above code that I really like:

I use the above patterns extensively in the testing strategy for the Dependency Analysis Gradle Plugin, and it has enabled me to radically rewrite that plugin's implementation while leaving the specs themselves almost totally untouched.

It's worth talking about the assertions at some length. Let's look more closely:

The first section simply asserts that the given task (":meaningOfLife") was successful. The assertion itself is driven by Truth and a custom extension to it I've written called testkit-truth that lets us write fluent assertions about the result of a Gradle build.

The second section is more interesting, to my mind, and gets to the heart of what I mean when I say that Gradle's primary abstraction is the filesystem itself. We know that our plugin produces a file output with the path build/meaning-of-life.txt. So, we run a build, and then directly read the file produced by that build, and assert is has the expected value. There are two things that are very powerful about this strategy: (1) these are not unit tests, so they are completely agnostic as to implementation. We can rewrite the code that does our expensive "meaning of life" computation, and these tests will still serve to prevent regressions. This makes the time spent developing the testing infrastructure a good long-term investment: no, or very little, churn. (2) If we have any issues with our test suite, one very useful debugging strategy is to inspect the generated code directly! Those files really exist on disk, and if you navigate to them in your IDE, it will provide syntax highlighting. We'll explore that some more in the next section.

As I said, that's the only Groovy in the project. All of the imports point either to external libraries or custom test fixtures written in Kotlin, and which live at src/functionalTest/kotlin.

First, we have a wrapper around GradleRunner, versions of which I include in all of my projects. I won't go into detail as to what each method call accomplishes, and instead encourage you to read the javadoc linked above. Suffice it to say, if you call build() with the appropriate arguments, the net effect will be a real Gradle build is executed inside your test. Gradle calling Gradle, with the results returned as a BuildResult for asserting against.

This next bit of infrastructure is pure custom test fixture code. This is not the only way to do it, but is about as concise as I could make it while still being "production-ready."

To best understand what this fixture accomplishes, I think it's simplest to inspect the files generated when we run our spec. First, make a slight change and run the spec:

You'll note we've commented out @AutoCleanup, to stop Spock from running our fixture's close() method. There are other ways to accomplish this, but sometimes quick-and-dirty wins the race. Click the run button, and then expand the build directory in the IDE's project view: 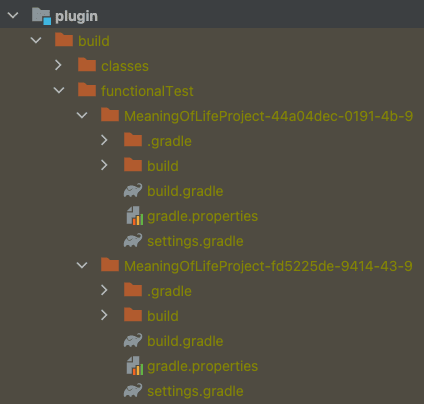 You'll note we have two basically identical sets of generated files, only differing by the name of the root directory, which of course is the combination of a UUID + a system property provided by Gradle from the slug() function above. We can now open one of the build.gradle files and see that it's exactly what we defined in MeaningOfLifeProject, complete with syntax highlighting!

I often use this technique when a spec is failing and it's unclear why. It can be much faster to visually inspect the generated files vs debugging.

We can also see the results of running our spec:

and the console output from one of the tests:

In this post, we've learned how to set up a functional testing suite for our Gradle plugins, using Gradle TestKit, the Spock testing framework, and the Truth and TestKit-Truth assertions libraries. Following the pointers in the code, you should be able to use JUnit4 or 5 as you prefer, or other assertion libraries. I may return for a follow-up post with a more complex example demonstrating how to more thoroughly manipulate the environment of the build-under-test, including how to inject AGP versions for testing against multiple releases in the same test invocation. Stay tuned!

1 Or, and let's be frank, a Gradle footgun. up
2 At time of writing, this plugin only works for the JVM, not Android. up
3 Well, not counting the Gradle script. up

How to test your Flutter Riverpod code with Mockito

The Javax to Jakarta mess, and a Gradle solution

Thanks for keeping DEV Community safe. Here is what you can do to flag autonomousapps: