Have you ever wondered what makes a team a great one?
I never did, until I had to create one.

The recipe of a great team

My first instinct would have been to hire just enough people and strive for a balance of various traits distributed across the members:

These are certainly the traits that define a remarkable co-worker, but they are not telling me anything about the team dynamics that I should be striving for.
So the question still stands, what makes a team a great one?

As it often happens, it turns out I'm far from the first one to ask this question.
In 2015 Google published a research aimed at answering this exact same question.
The result was in fact that:

Who is on a team matters less than how the team members interact, structure their work, and view their contributions

In their research Google highlighted five dynamics that set successful teams apart from average ones, and the first of them is psychological safety.

What is Psychological Safety and why does it matter?

Psychological safety was first theorised by Harvard Business School professor Amy Edmondson.
In her book "The Fearless Organization: Creating Psychological Safety in the Workplace for Learning, Innovation, and Growth" she outlines the definition of this term and why it is the fundamental trait of successful teams.

-- Amy Edmonson, "The Fearless Organization: Creating Psychological Safety in the Workplace for Learning, Innovation, and Growth

We can define Psychological Safety as the climate where anyone in the team feels free to speak up.

The traits of a psychologically safe environment

How does one know if they are in a psychologically safe environment? Let's see what are the consequences we would see in such a team: 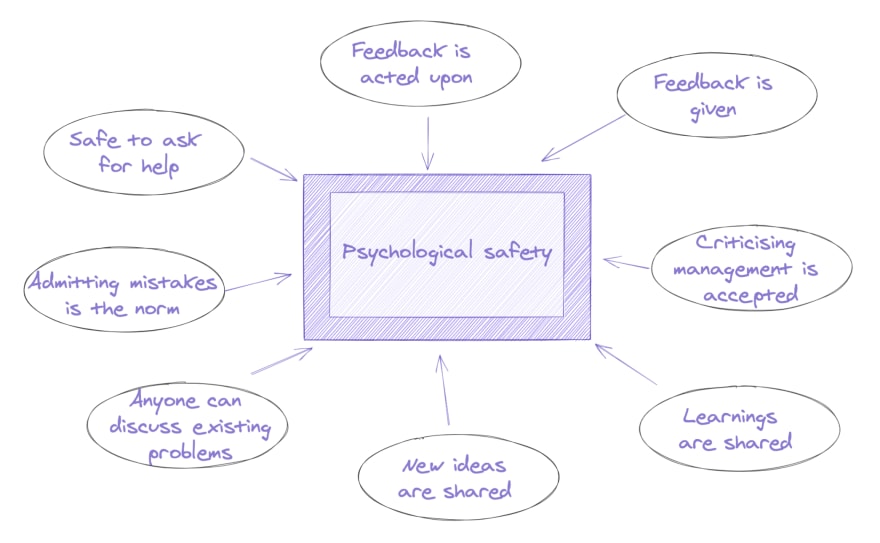 What Psychological Safety is not

Edmonson clarifies in her book and in many of her interviews what Psychological Safety is not. I find this distinction very important to drive the idea in the right direction, as it might be easily misunderstood.
Safety is not about:

And finally, safety is not a personality trait. It's a team trait.

How does Psychological Safety exist within a team?

Psychological safety is a deliberate investment. It doesn't happen by itself or by chance. It's not the result of the chemistry of the team members.

It's the result of a proactive, continuous effort of the management and the team members to instil this value on a daily basis in the fibre of a team. Managers need to create an environment where making mistakes is accepted and talking about them is encouraged so much that it's the norm.

A side effect of mistakes being surfaced frequently is that either new processes are created or existing ones are perfected. This constant rework of the status quo is what sets great teams apart.

Who should invest in Psychological Safety?

In one word: everyone. And by everyone I mean:

Looking back: an interesting game

Once I learnt about Psychological Safety, I started playing a game in my head.
Of all my past teams, can I rate how psychologically safe those places were?
Unsurprisingly, the teams that scored higher were also the ones where I learnt the most and felt that I could make an impact.

What about you? How did your past team or your current one score?

Roadmap to being a Full Stack Web Developer

How to write a good resume

How do you review CSS?

Aurelio
Engineering manager and software engineer in Berlin.
Lunch break talks #2: Things I wish I knew when I was younger
#techtalks #leadership #motivation #tips
Should my small team really, really, really do code reviews?
#productivity #agile #startup
How I remember everything I learn
#productivity #learning #tips