An analogy to a real-life issue:

This morning I wanted to eat some pizza; So, I asked my brother to get me some from Dominos, which is 3 km away.
He got me the pizza, and I was happy only to realize it was too little for 29 friends who came to my house for a surprise visit!
My brother can get 2 pizzas for me on his bike, but pizza for 29 friends is too huge of an input for him, which he cannot handle.

What is Time Complexity?

Time Complexity is the study of the efficiency of algorithms. It tells us how much time is taken by an algorithm to process a given input. Let's understand this concept with the help of an example:

Consider two developers Shubham and Rohan, who created an algorithm to sort ‘n’ numbers independently. When I made the program run for some input size n, the following results were recorded:

We can see that at first, Shubham's algorithm worked well with smaller inputs; however, as we increase the number of elements, Rohan's algorithm performs much better.

In order to calculate the order(time complexity), the most impactful term containing n is taken into account (Here n refers to Size of input). And the rest of the smaller terms are ignored.

Let us assume the following formula for the algorithms in terms of input size n:

Here, we ignored the smaller terms in algo 1 and carried the most impactful term, which was the square of the input size. Hence the time complexity became n^2. The second algorithm followed just a constant time complexity.

Note that these are the formulas for the time taken by their program.

Putting it simply, big O stands for ‘order of’ in our industry, but this is pretty different from the mathematical definition of the big O. Big O in mathematics stands for all those complexities our program runs in. But in industry, we are asked the minimum of them. So this was a subtle difference.

If we were to plot O(1) and O(n) on a graph, they would look something like this: 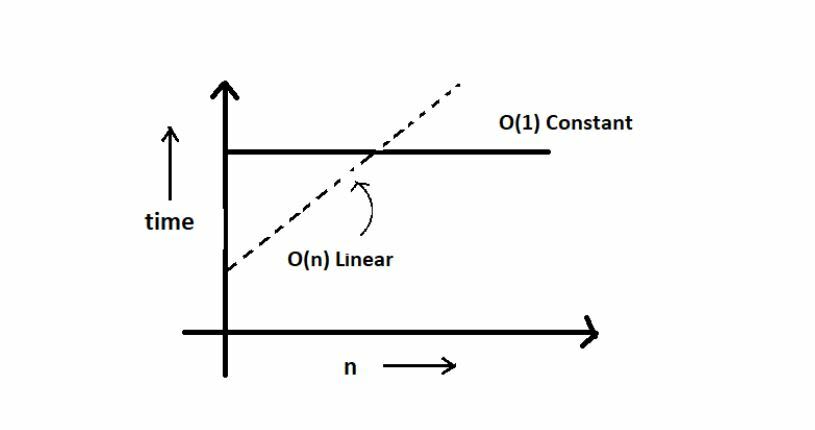 So, this was the basics of time complexities. You don't have to worry about things passing you by. We’ll learn more deeply in the coming videos. For now, just stay with me.

Thank you for being with me throughout the tutorial. I hope you enjoyed it. If you appreciate my work, please let your friends know about this post too.
Reference from codewithharry.