Setup the Gitlab CI/CD pipeline to create a react production build and deploy to our server whenever code is merged to master branch. The attached steps can also be used for other SPA like Angular, Vue.js.

We are going to use Gitlab CI/CD Variables to save a private SSH key which Gitlab will use to authenticate with the server.

We are going to use SSH keys to authenticate rather than username and password as it is more secure.

This can be configured at a repository level or at a group level.
To view all the CI/CD variables of your repository,

You can also view the same at a group level by first navigating to the group (Menu > Groups > Your Groups) and following the same steps.

If you already have a SSH_PRIVATE_KEY private key variable listed, you can skip this step.

To create a new variable, Select the Add Variable button and fill in the details: 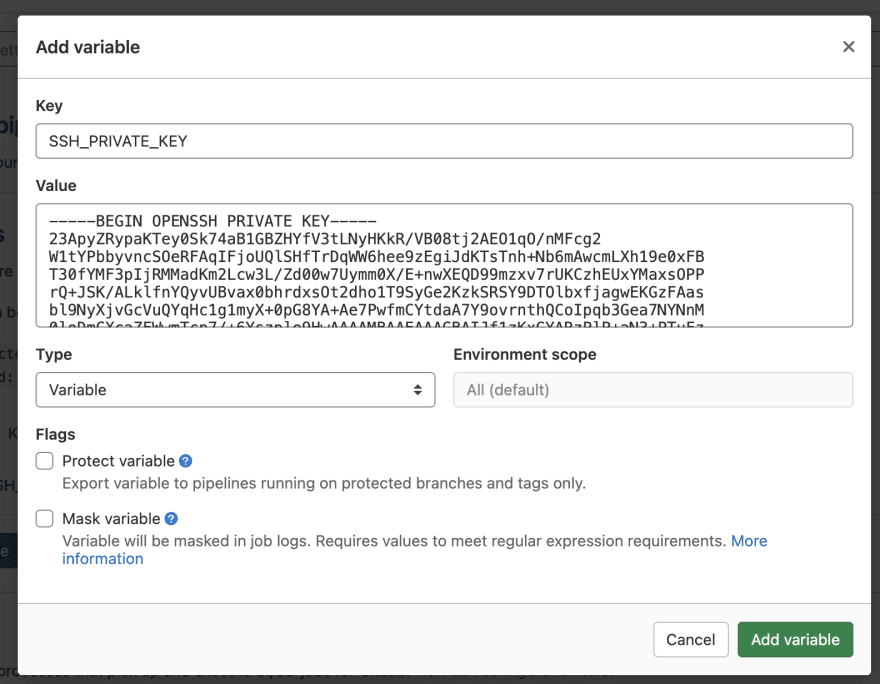 Now, we need to add SSH public key to the list of authorized_keys in the production server.

Gitlab looks for .gitlab-ci.yml in the root folder of your repository for CI/CD pipeline configurations

Add a new file .gitlab-ci.yml in the root folder

We need a runner to run our CI/CD pipeline jobs. This step is optional if a runner is already configured for your group in Gitlab.

Push the .gitlab-ci.yml and deploy/deploy.sh files to master to start the automated deployment.

When the deployment is complete, you should see a green checkmark in the repository home page similar to

Dagger and CUE, the new kids in the block

When I am pushing to remote Git repo, the push was rejected because...

If you need a new website to develop at an affordable price, send us a message with your request.
We help early stage startup and new small and medium enterprises with their web development needs.