I been a Django developer for about a year++ now, I'm not saying I am well verse in it or do I intent to claim so... There's so many to learn and each and everyday I learn something new... So much so that I think I could never finish learning the whole Django framework and how much it struck me that no matter what, Django been able to keep me amaze.

Anyway, one thing about Django that I wish I can improve upon is its templating system... Shall I say its a bit too 'static' ? It has the power to become much more with its templating system, changing to Jinja2 really makes it that much more amazing... but to make a modern web application that rival most big website, I definitely think we need a proper Java Script(JS) framework.

My JS framework of choice happen to be the newest kid on the block (at the time of this writing) Svelte. I cant even begin to tell you how amazing this framework have been for me. Imagine how easy it is to have someone with minimum exposure to JS to quickly help get an app ready in a matter of minutes.

That said, I kinda have issues with getting both Django and Svelte to work together, I think this also applies to any other framework.
The solution I see online had been mostly involve getting 2 separate server (one for Node.js via Sapper/Routify (both consider as a good Svelte server solution) and Django as the API server) to communicate via API.

The fact is, I still haven't found a way to make it work via Django Templating system. So for the last 2 weeks I been experimenting with integrating both this wonderful framework and getting the best of both world.

If you ask me, what I'm gonna present here may not be the best solution, and some may say that this might not even be consider worth the effort. I honestly dont know or cant see if there is any issue that may arise from this, but time will tell if its the right path to take.

For those who just stumble upon this post due to svelte tag and didn't know about Django, I would like to elaborate what I like about Django ( mind you that I have no experience with other framework... I repeat Non.. So I'm not comparing with other and you may comment how other framework fair compare to Django).

Honestly, Django have this amazing tagline ( The Web Framework for perfectionist with datelines)... I have to say for the year that I been using Django its been holding up to its name. I had receive a task on a Friday evening, work on it on the weekends and still manage to deliver on the Monday morning. Mind you this is not some random toy project. Its a proper production ready project that is currently being use internally in the company that I work at right now. Some might argue that if its for internal use I might skim through some detail... such as securities and also proper audit... this project is being host on cloud, due to confidentiality of the information being kept on the web app, the web app being pentested and when to trial significantly before its being put to production. On a side note I think this web app is one of my proudest project.. I guess what I'm trying to say here is that battery included framework such as Django really help to speed up the project from an idea to finish product in a weekend. I know, I know, "What... you work on a weekend"... well as a dev sometime you need to make such sacrifice right?

Enough bragging about how awesome Django is for me right,
here's the part of the show and tell.

I would first make a disclaimer, I been an avid user of CoderedCMS. CoderedCMS as its name is, is a Content Management System (CMS) created by Codered. It is an extension of Wagtail CMS which is a framework build upon Django. I think the solution I would propose here would work with Django without much issue, but if you follow the project from start to end, I think you may be surprise at how powerful this solution really is.

For this solution to work also, I think, depending on your preference of frontend JS routing solution the experience might be different but take the propose solution here as a guideline not something that have been set in stone but I definitely prefer to Routify route. Honestly since Svelte3 is still a relatively new framework, there's isn't many tutorial yet compare to Angular, React or even Vue but that doesn't make it any less of a powerful framework. I would even bet that if many took the time to try this framework, you'll be surprise at how great the DX is.... sorry for bragging again.

1. Get your git ready 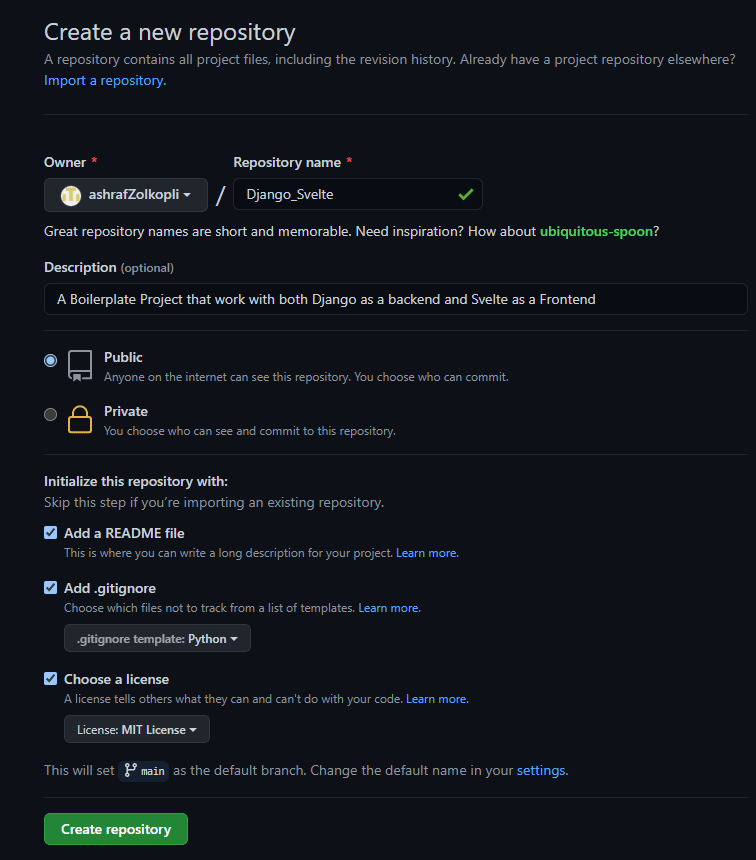 For this project I decide to make it public so you guys can just pull the project if you just wanna make use of it later.

2. Pull the project into your computer

Honestly, I might get a lot of burn here but I honestly been lazy with git command, so I been relying on GitHub desktop all this while... 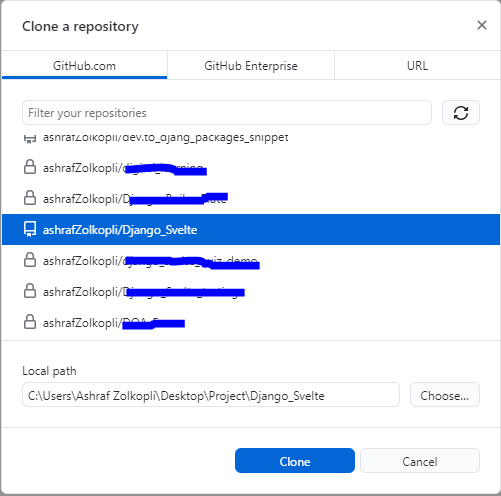 now you can just open in your fav IDE, As for me its VS Studio. 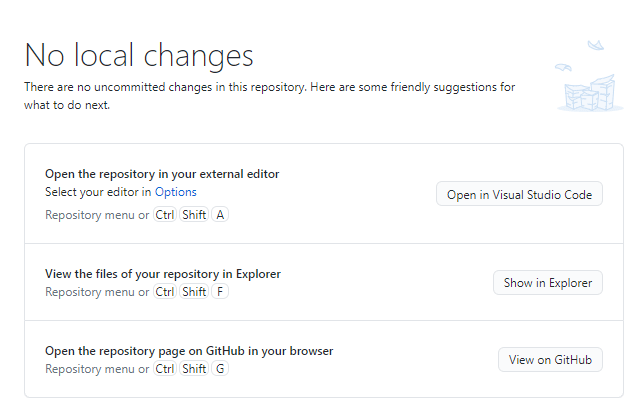 compare your directory is similar to mine....

I been using pipenv but you may use any other virtual environment too though.. For me its just easier with pipenv....

enter this command in your terminal will create if new and activated virtual environment.
You should be able to see something like this....

Actually the important part is seeing that "( )" in the beginning of the line. It means now your virtual environment is activated.

now check too if your directory have change

as you can see there's a new pipfile... so if you follow this much once you clone this application, I would suggest you activate your pipenv virtual environment in the directory that you see pipenv is in.

actually if this is the first python you install in the library, the pipenv will create a new pipfile.lock file

The command for this would be

so for me, since I'm gonna name this project Django_Svelte ... No shit right, no creativity at all....

looked at your directory now, it should change to 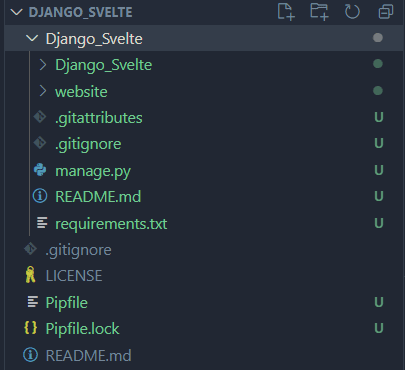 Now since Routify (Svelte ) is a Node project, I would suggest you to open a new terminal to make it easier to change between python and Node

notice now that you change the pipenv terminal to cmd...

once you are in the new terminal, change directory to

To change directory to Django_Svelte, the command is

once in the directory, we have to make a new directory, I will name this directory Svelte,

mkdir is the command to make directory 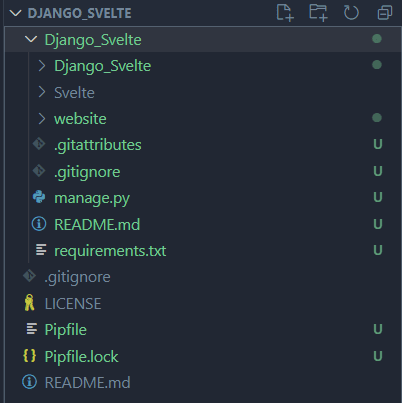 we can now clone the Routify project with the command

we need to wait for a while yeah

now check for the ever increasing size of your directory.... 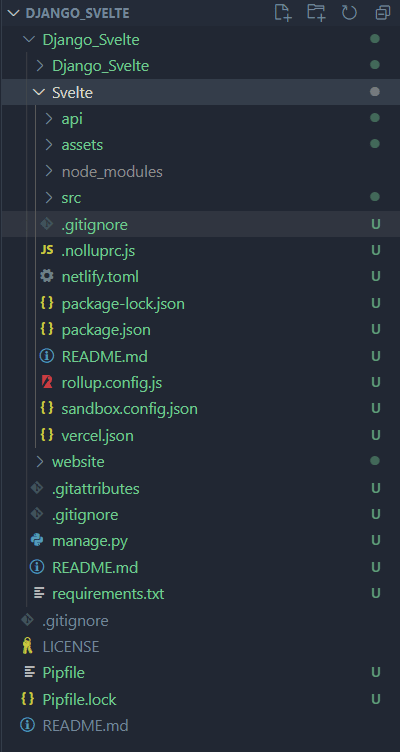 7. Lets check if the Routify installation was successful

to run a dev server for Routify(Svelte) is

lets see it activated in chrome,

the url for this would be

Routify also included an example page with the url 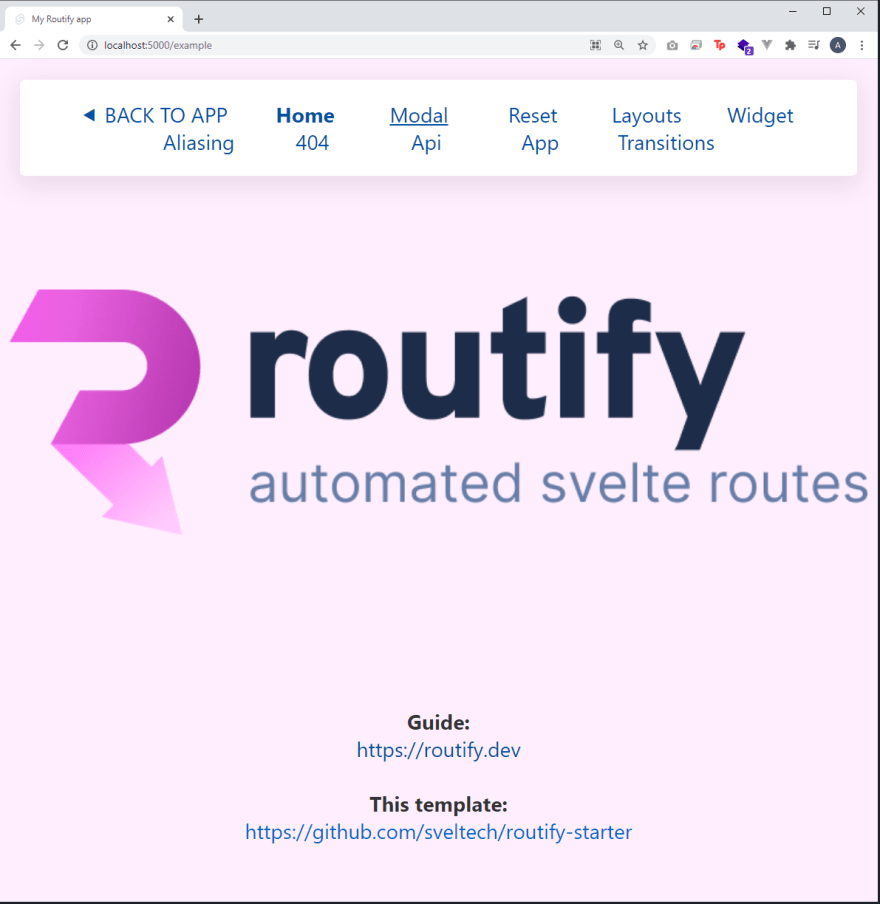 now that we know that the Routify(Svelte) portions works, lets make changes to Django so we change make Django Serve the application.

To simplify this show and tell, we could start with an app call example.

change back to terminal 1.pipenv

if you haven't change to Django_Svelte directory just type

now we can start a new app call example with

look at your directory now 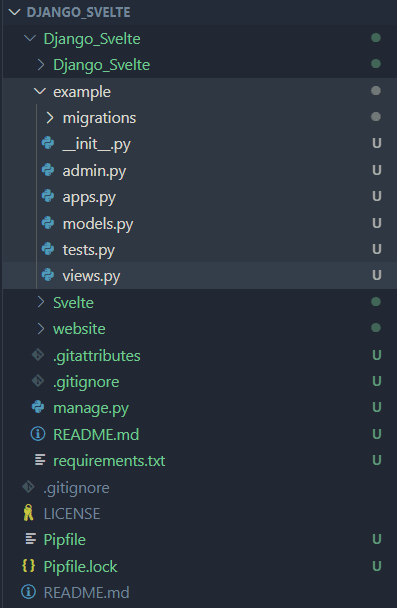 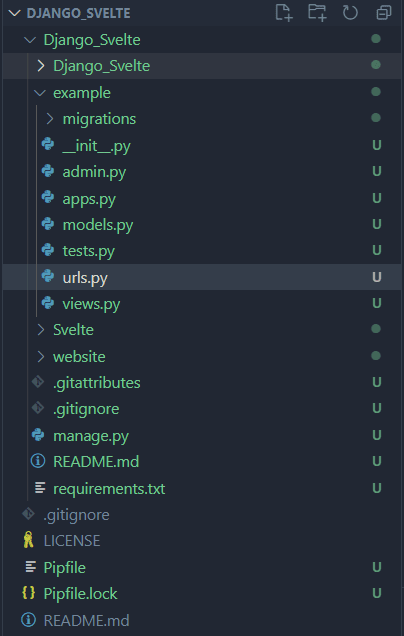 add the code below

in the file base.py, first register example as one of the install app 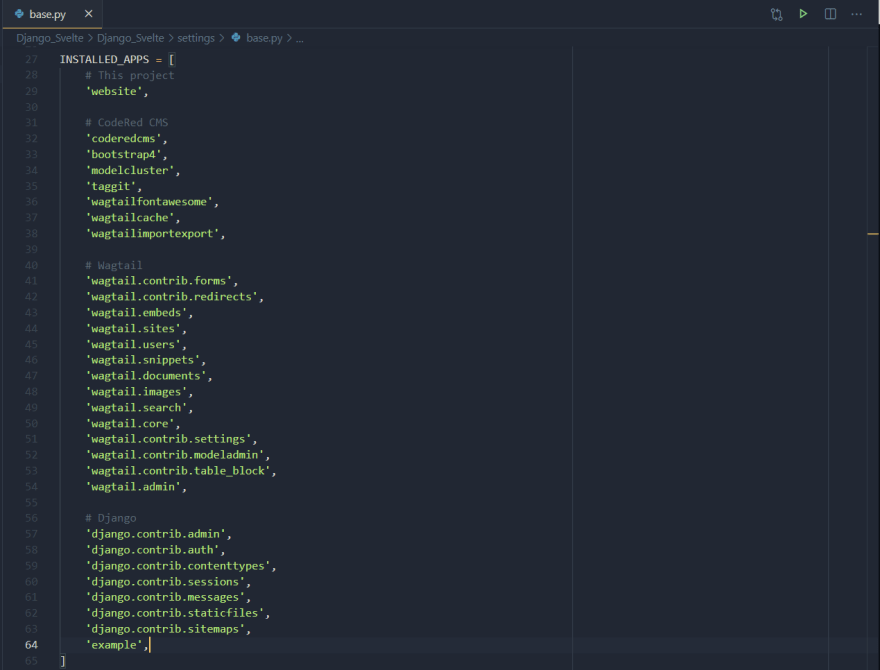 now lets edit the Templates setting to this 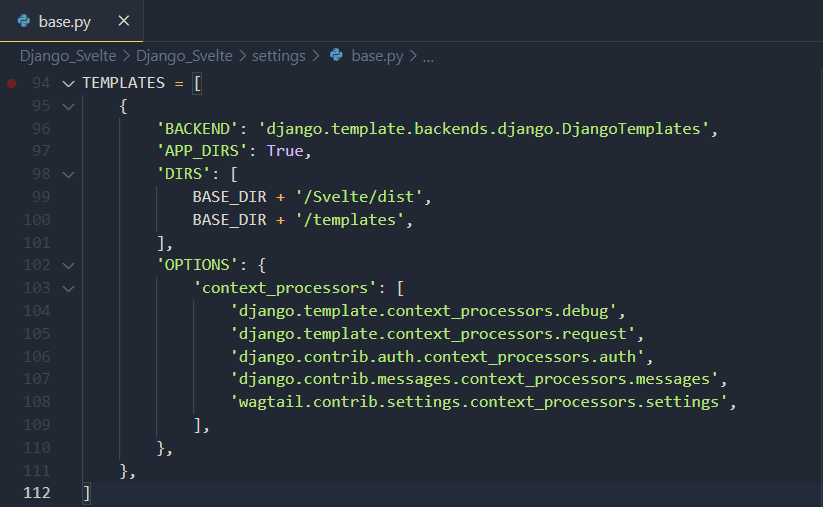 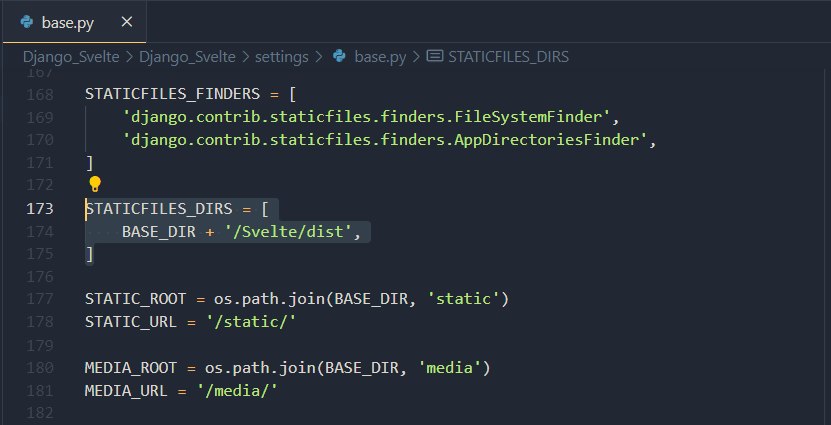 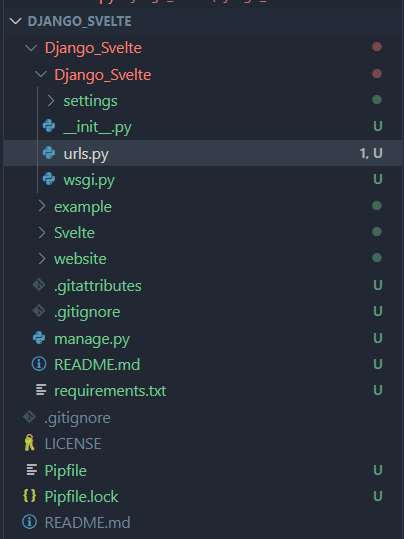 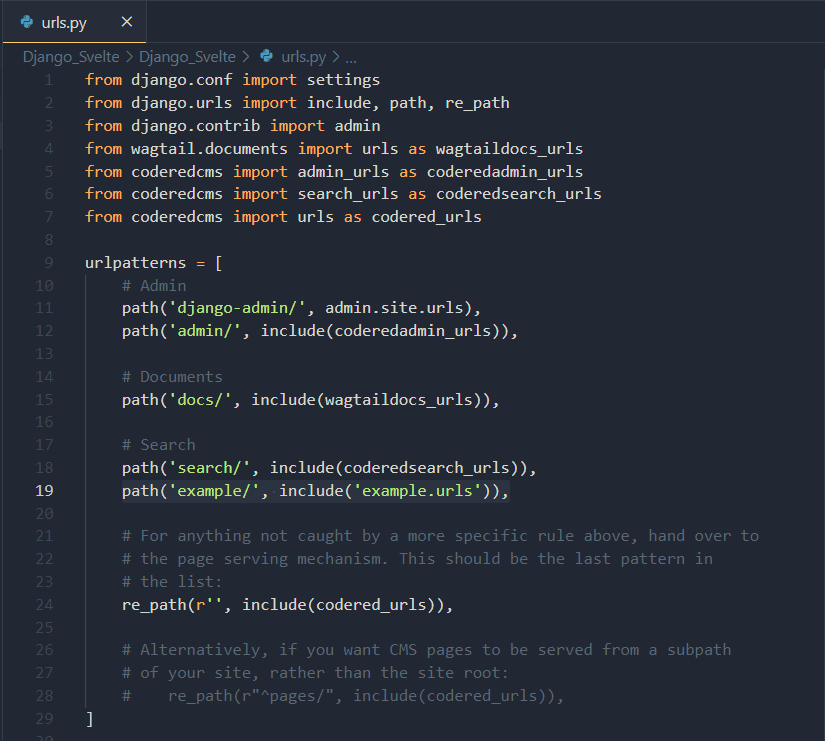 I guess for now lets try starting the python dev server
since we havent actually try the server previously,
enter this command in the terminal

lets wait for the migrations work its magic touch

then lastly you would see this 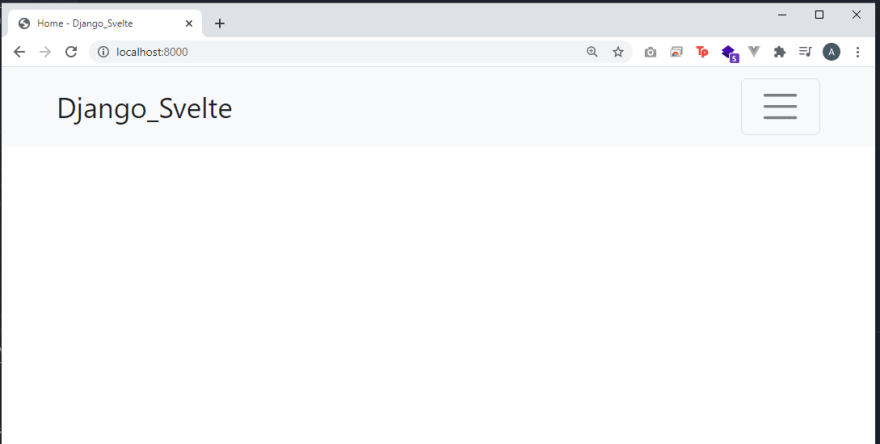 well remember we had also register example as our link?

django throw us an error that Template does not exist...

9. Configure Svelte to work with Django

now lets make this changes to the file 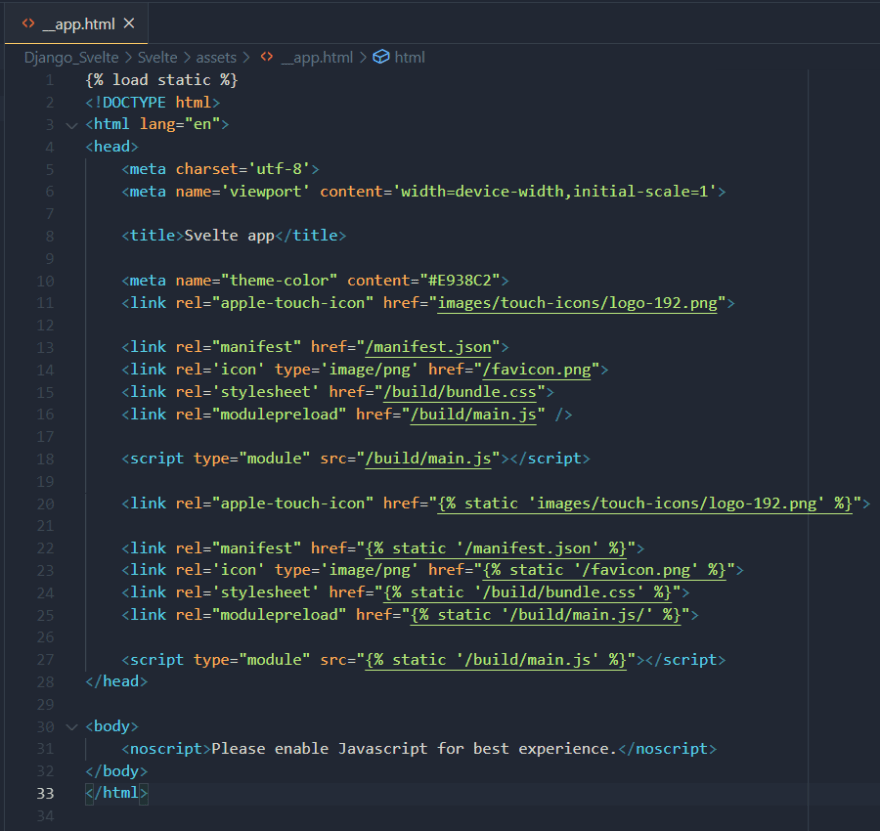 once this is done

please check your terminal if your node dev server is still runnning if yes, we need to kill it first...

now your node server is done. 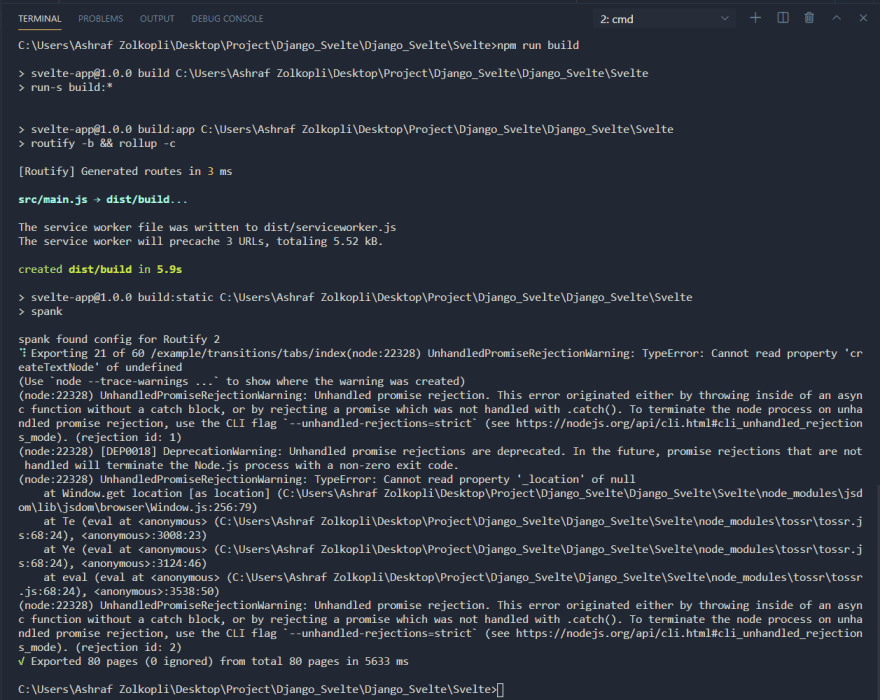 check if your python dev server is still running 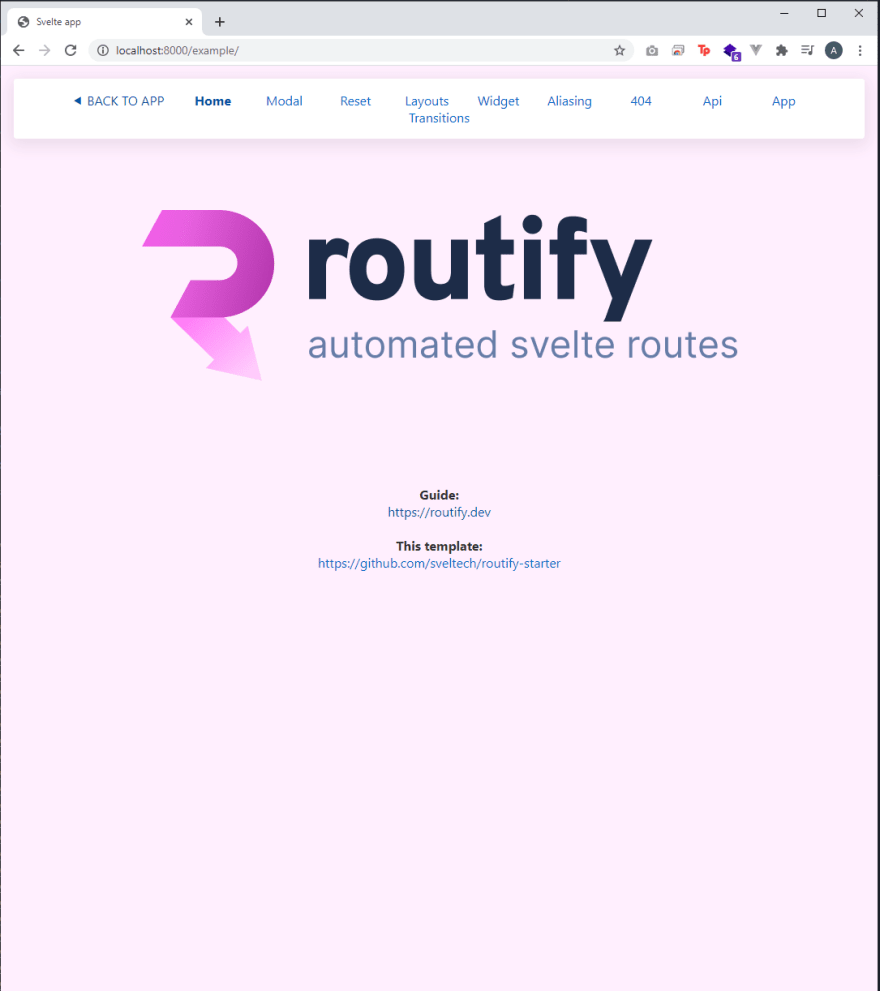 ok now for some caveat... if you need to make changes to the front end,

every time you wanna make changes to the page and want to be served by django,

please remember to build the application with

while your node server is running, django will not able to find the template so yeah that something to keep in mind. 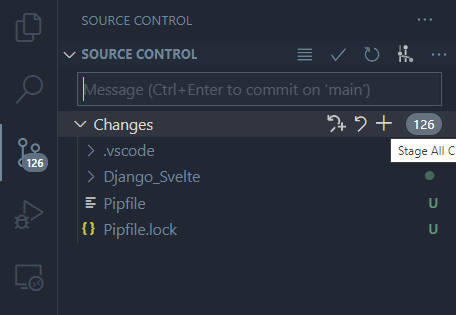 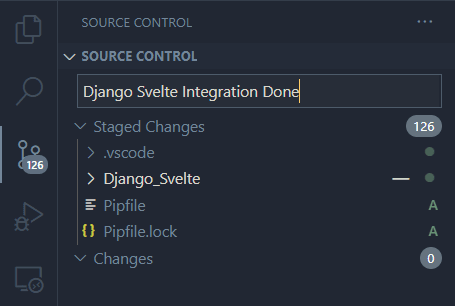 now this is been to committed to your local git...

now you need to push to github.com 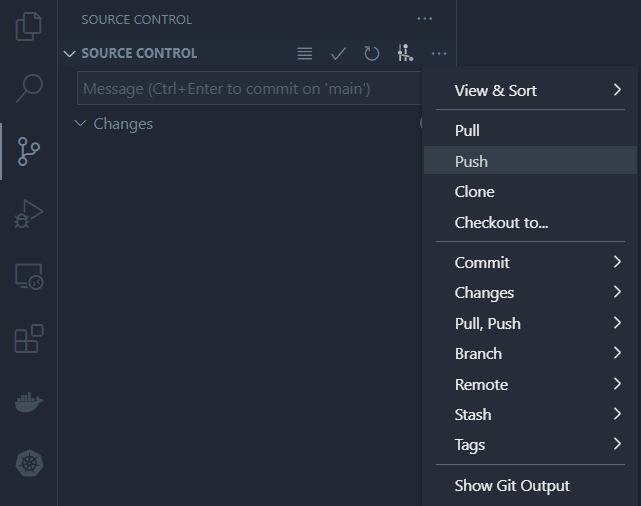 this will sync between your local git to your github account 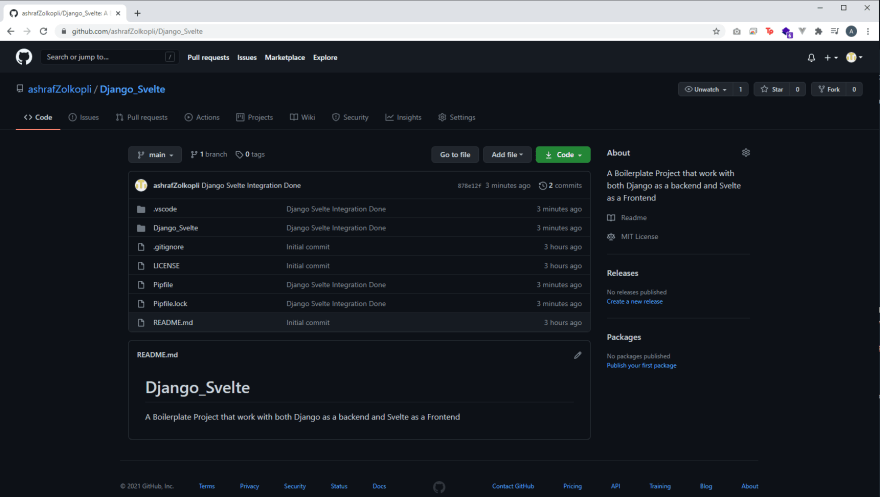 Phewww that was a long post... Honestly I didn't expect it to be this long it took me like 4 hours to write this pose hope it helps guys...

feel free to comment on this post if It help or you are requesting some help... Ill try to reply as soon as possible.

Thanks for making it up to this part.... I hope you enjoy this post as much as I enjoy writing it...

BTW before I forget, heres the repo

Make everything with Svelte