Live messaging, streaming, Torrents, and other similar real-time data transfer techniques have greatly affected and improved our virtual experiences. First, they were available natively, now through the web, bringing an impressive amount of possibilities to this universal platform. That's all thanks to APIs known as WebSocket and WebRTC.

Now, I bet that you've heard of WebSocket. In fact, you've likely used it in some of your previous projects. Still, if not, here's a brief overview.

WebSocket is a simple API that allows you to connect your clients indirectly, i.e., through a server. Basically, if one user wants to send some data to the other one, they both need to be connected with the server first and then pass the data through it. This approach naturally comes with some pros and cons. While it allows you to optionally process data on the server-side and assures the completeness of sent information (through TCP protocol), it isn't really fast. Because of the proxy-like server, a generic transfer can take up to 1 second, which isn't much, but can make a huge difference in use-cases like audio and video calls.

That's why WebRTC was introduced back in 2011. And, even if quite a lot of time has passed since then, its complexity and cross-browser support concerns result in beginners still having a hard time learning and using it. That's why, in this post, we'll go through the basics of WebRTC and explaining everything as simply as possible.

WebRTC stands for Web Real-Time Communication. The key concept to understand about it is that it's meant for direct connection. This means that after the connection has been established (more on that later), in most cases, you don't need any sort of server being involved in data transfer. That translates to, of course, faster transfer speeds. This fact makes it the best choice right now for audio/video streaming or creating P2P networks like Torrent.

Don't get me wrong tho. You still need a server - even when working with WebRTC. It'll be used in a process called "signaling", where the peers will be connected to each other. After that, all the data will be transferred directly between the peers in an encrypted state. This means that a WebRTC connection is secure by default.

Other than that, keep in mind that servers can still play other roles in a WebRTC connection. For example, they can serve as an always-online peers, ready to transfer or backup data at any time.

Because WebRTC is newer than e.g. WebSocket, it isn't really backward-compatible, resulting in no support for IE and all older browsers. Still, according to caniuse.com, it's supported by more than 94% of the reported browsers, so no worries here.

WebRTC is, in fact, a collection of different APIs rather than a single one. That's why we're not going to cover all but only the core parts of WebRTC. These are:

While not being a part of the WebRTC connection process per se, MediaStream API, with its capabilities of capturing video and audio data through user's device, is vital to one of WebRTC's main use-cases - video/audio streaming.

At the heart of MediaStream API is the getUserMedia() method of the navigator.mediaDevices object. Note that this object will only be available when you're working in an HTTPS ****(secured) context.

The method takes what's called a constraints object and returns a promise that resolves to a new MediaStream instance. Such an interface is a representation of currently streamed media. It consists of zero or more separate MediaStreamTracks, each representing video or audio track, from which audio tracks consist of right and left channels (for stereo and stuff). These tracks also provide some special methods and events if you need further control.

Let's now talk about our constraints object, as this is a very important piece. It's used to configure our getUserMedia() request and the resulting stream. This object can have two properties of either boolean or object value - audio and video.

By setting both of them to true, we're requesting access to the user's default video and audio input devices, with default settings applied. Know that for getUserMedia() to work, you have to set at least one of those two properties.

If you want to configure your media source device settings further, you'll need to pass an object. The list of properties available here is quite long and differs based on the type of track it's applied to (video, audio). You can see a complete list of those here and check for the available ones with the getSupportedConstraints() method.

So, let's say that we want to be a bit more specific this time, and specify some additional configuration for our video track. That'll be its width, height, and input device.

Notice how we check if the given constraint is supported (although all used above should always be - unless there's no input device), and use the enumerateDevices() method to check for available input devices, together with setting the video's resolution. It returns a promise which resolves to an array of MediaDeviceInfo objects, which we later use, to select the first one in line for video input.

Then, a simple edit to our getMedia() function, and we're good to go!

You might be interested in hearing that's there's also a method for accessing the device screen (and even sound in the latest browsers), called Screen Capture API, which consists of a single getDisplayMedia() method.

There's a lot of potential in using the getUserMedia() and getDisplayMedia() methods. Especially when combined with, e.g., Canvas and Web Audio APIs. But, as this is a topic for another day, we're only interested in previewing our streams with simple <video> and <audio> elements.

As for actually using those from JS:

Debugging a web application in production may be challenging and time-consuming, however through the use of OpenReplay’s Assist, you can see the live screen of your users and even jump on a quick call with them. All thanks to the power of WebRTC. 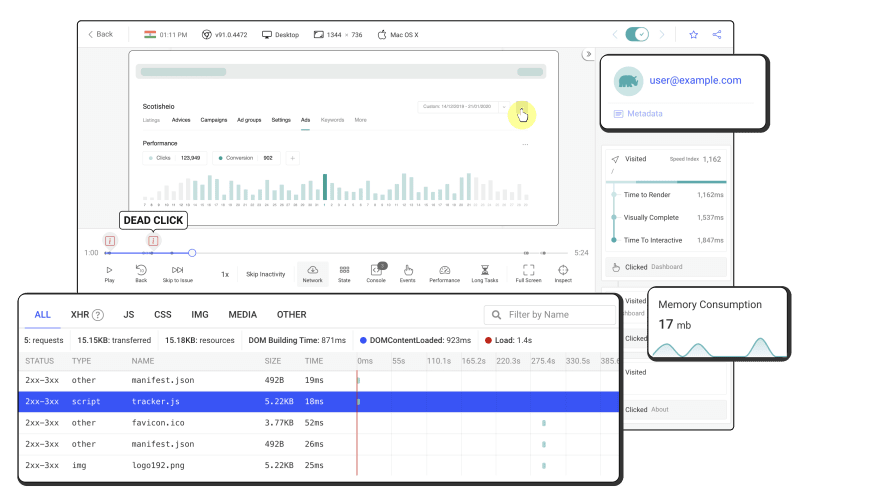 OpenReplay is an Open-source alternative to FullStory, LogRocket and Hotjar. It allows you to monitor and replay everything your users do and shows how your app behaves for every issue.

The RTCPeerConnection is the main interface behind any WebRTC connection. It hides a lot of complex stuff like data encoding, encryption, processing and more, in a small and somewhat user-friendly API.

Before we start sending data, we need to first connect the two or more peers in the signaling process. As more than 2 peers would require special handling and a TURN server, we’ll stick to the basics and work with only 2.

As the RTCPeerConnection relies on events, we'll use these and something called RTCIceCandidate to set up our connection. ICE stands for Internet Connectivity Establishment and indicates the established protocol and routing used throughout the connection. Here you can, e.g., decide between the UDP and TCP protocols, depending on whether you need your data to be delivered fast with some possible losses or otherwise.

Because demonstrating snippets with the involvement of server code can be tough, we'll work with two connections created in the same environment. Don't worry - if you already know WebSocket or any other form of data transfer for that matter, you should be able to use the herein code for real-world scenarios relatively easily.

After creating our connections, we'll need to set up their respective icecandidate event handlers to listen for possible offers.

With the code above, we listen to new ICE candidates and accept them immediately on both sides. In reality, this process can take a bit longer. Generally, the whole idea behind it is that the users will offer each other different connection configurations, until both sides settle on one, and the connection will start. It's at that time that you will need the server to exchange the offers.

Now we move onto creating an offer. You can do just that with the createOffer() call, to then use it to configure the local connection. After that, we have to send this configuration to the remote connection, where it'll be either accepted or rejected. Here, as we don't do any decision-making process, we're accepting any configuration up-front. We do this using the setRemoteDescription(), and then we send the return information to be accepted again on the local side.

After all the "negotiations" are done, the icecandidate event will be fired, and the signaling process is complete.

So, with signaling done - somewhat of the toughest part of the process - we can now go straight to streaming.

I've already shown you how to get a MediaStream object from one of the user's input devices. We’ll use that for this demo.

Let's assume that we have a MediaStream object ready to go. In this case, you can use the addTrack() method to start transmitting individual tracks. It's worth noting that there used to be an addStream() method to add whole MediaStreams at once, but it's now obsolete and you shouldn’t use it (although some browsers might still support it).

On the receiving side, create a new MediaStream with its constructor, and listen for track events. Add all incoming tracks to the stream, and attach the stream itself to a video element.

Now, to make the system work, you need to remember to set up streaming and receiving before you make an offer. In our case, this translates to before the connect() call.

If you’d like to update the streamed tracks down the line, you’ll need to handle negotiationneeded event on the RTCPeerConnection and renegotiate the offer there.

Apart from streams, you can also use WebRTC for transferring arbitrary data. That’s thanks to RTCDataChannel.

To create a data channel, you have to use the createDataChannel() method of RTCPeerConnection, passing the channel’s name as a parameter.

On the other side, listen for datachannel events, and extract channel property from the event object.

To actually use the channel, you need first to wait for it to open, using the open event listener. After that’s done, you can use the send() method to send all kinds of data and receive it on the other side within the message event handler.

Above, we’ve got a simple React Hook-like wrapper around RTCDataChannel. Its Promise resolves on open, returning a function for sending data and allowing for an optional callback to handle message events coming from the other side.

You can use the wrapper like so in the original connection functions:

You can initiate the system similarly to how it was done for streaming - with connect() function called last.

Note that you shouldn’t await for the channel to open - it’ll happen after the connection is made. To avoid confusion and illustrate this intention in both startSendingData() and startReceivingData() I’ve used the then() instead of async/await.

As you can see, working with WebRTC API isn’t that hard. Furthermore, with additional help from WebSocket, or a public TURN server, you shouldn’t have much problem with establishing production-ready connections for 2 or more peers.

With the ability to both stream video and audio and exchange any arbitrary data directly between peers, WebRTC is a powerful tool for building performant, cost-efficient real-time applications.

How to Write Beautiful and Meaningful README.md