Tests, linters, build. All those and much more are very often automated in CI/CD. But you can go further and automate assigning developers to do a code review of PR. And you can specify different code owners of different parts of code as well.

Code owners are not a new feature, it was introduced on the GitHub blog already in the year 2017. But for small teams or individuals, this might not be so useful. So I learned about it just now.

Gitlab supports code owners too, but only on a paid plan. So I wasn't able to test it. However, it should be the same, according to their documentation.

What are Code owners and why you want to define them?

With code owners, you can define individual developer or the whole team, who is responsible for the code. When a new PR is created, it will automatically assign code owners to do a review, if some files owned by them are changed.

And later, in branch settings, you can specify Required review from code owners rule. And no one will be able to merge the code, until some owner approves PR. 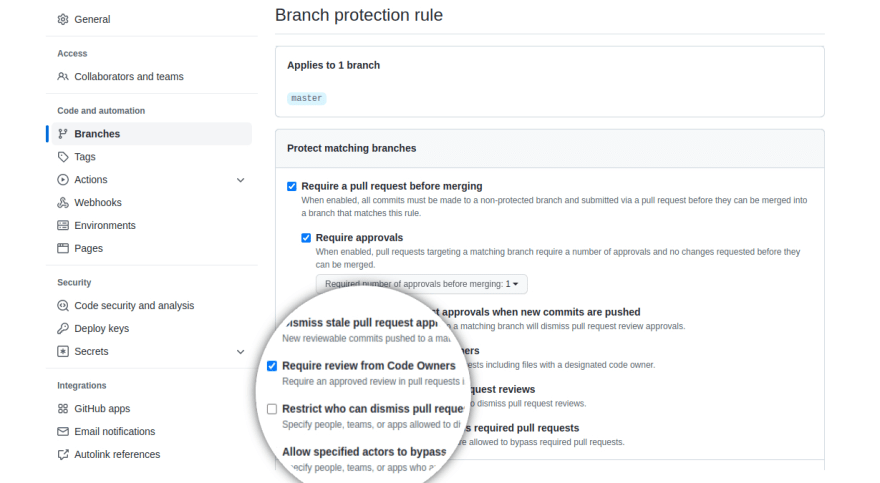 The team as a code owner

You can also select a member of the team, which is never assigned to do a review. In our team, it is the main architect. He is still code owner, because the team is code owner. But is not assigned to review.

Unless you specify him directly as code owner of some file. If that file is changed, he is assigned as reviewer. But not as a team member, but as code owner.

The config of code owners is in .github/CODEOWNERS file. Each line contains a file pattern followed by one or more developers or teams as owners. Later match takes precedence over the earlier rule.

File pattern is the same as in .gitignore file and is documented in Pattern format section of git documentation.

Best tools to outsource your IT projects

How to deploy your App to Kubernetes in 14 seconds

Once suspended, arxeiss will not be able to comment or publish posts until their suspension is removed.

Once unsuspended, arxeiss will be able to comment and publish posts again.

Once unpublished, all posts by arxeiss will become hidden and only accessible to themselves.

If arxeiss is not suspended, they can still re-publish their posts from their dashboard.

Once unpublished, this post will become invisible to the public and only accessible to Pavel Kutáč.

Thanks for keeping DEV Community 👩‍💻👨‍💻 safe. Here is what you can do to flag arxeiss:

Unflagging arxeiss will restore default visibility to their posts.