C language does not support inheritance however it does support Structure Compositions which can be tweaked to serve use-cases requiring parent-child relationships. In this article, we find out how Structure Compositions help us emulate inheritance in C and keep our code extensible. We will also find how it powers two of the most important things to have ever been invented in the field of computer science.

What is structure composition?

Structure Composition is when we put one structure within another, not through its pointer but as a native member - something like this

Using list_head structure, if we were to define a node of a linked list holding an integer value we could create another struct, named list_int that holds a member of type list_head and an integer value value. The next and previous pointers are brought into this struct through list_head list and could be referred to as list.next and list.prev.

There is a very genuine reason for picking such weird names for a linked list node and members of structures; the reason to do so will be cleared in the later sections of this essay.

Structures in C are not padded and they do not even hold any meta information, not even for the member names; hence during allocation, they are allocated the space just enough to hold the actual data. 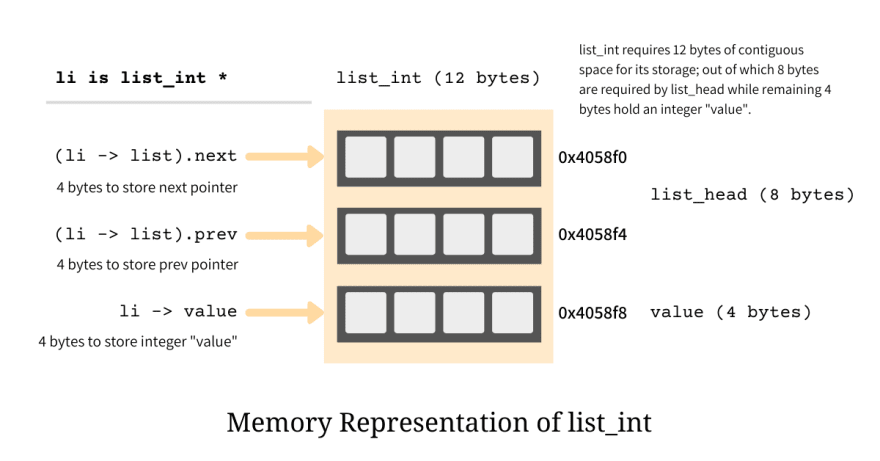 In the illustration above we see how members of list_int are mapped on the allocated space - required by its individual members. It is allocated a contiguous space of 12 bytes - 4 bytes for each of the two pointers and another 4 bytes for the integer value. The contiguity of space allocation and order of members during allocation could be verified by printing out their addresses as shown below.

We clearly see all the 3 members, occupying 12 bytes contiguous memory segments in order of their definition within the struct.

The above code was executed on a machine where the size of integer and pointers were 4 bytes each. The results might differ depending on the machine and CPU architecture.

In C language, when a pointer to a struct is cast to a pointer to another struct, the engine maps the individual members of a target struct type, depending on their order and offsets, on to the slice of memory of the source struct instance. 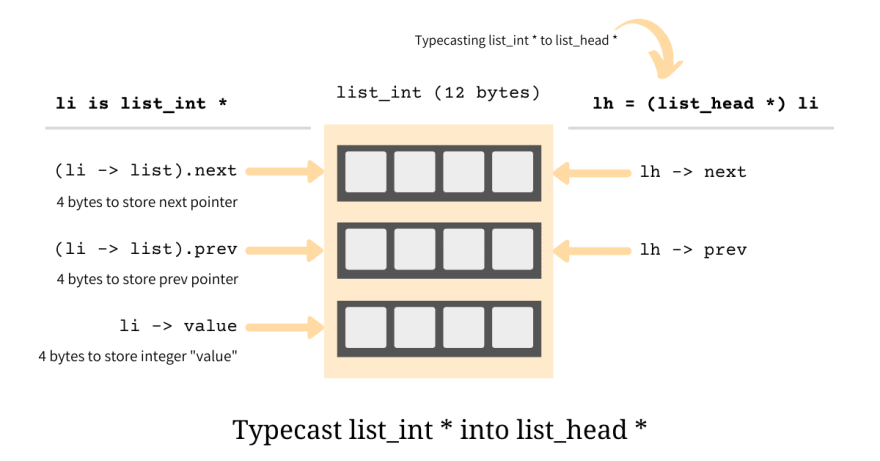 This effectively builds a parent-child relationship between the two structs where we can safely typecast a child list_int to its parent list_head.

It is important to note here that the parent-child relationship is established only because the first member of list_int is of type list_head. it would not have worked if we change the order of members in list_int.

How does this drive inheritance?

As established above, by putting one struct within another as its first element we are effectively creating a parent-child relationship between the two. Since this gives us an ability to safely typecast child to its parent we can define functions that accept a pointer to parent struct as an argument and perform operations that do not really require to deal with specifics. This allows us to NOT rewrite the functional logic for every child extensions and thus avoid redundant code.

From the context we have set up, say we want to write a function that adds a node between the two in a linked list. The core logic to perform this operation does not really need to deal with any specifics all it takes is a few pointer manipulations of next and prev. Hence, we could just define the function accepting arguments of type list_head * and write the function as

Since we can safely typecase list_int * and list_str * to list_head * we can pass any of the specific implementations the function __list_add and it would still add the node between the other two seamlessly.

Since the core operations on linked lists only require pointer manipulations, we can define these operations as functions accepting list_head * instead of specific types like list_int *. Thus we need not write similar functions for specifics. A function to delete a node could be written as

Other linked list utilities like adding a node to tail, swapping nodes, splicing the list, rotating the list, etc only require manipulations of next and prev pointers. Hence they could also be written in a very similar way i.e accepting list_head * and thus eliminating the need to reimplement function logic for every single child implementation.

This behavior is very similar to how inheritance in modern OOP languages, like Python and Java, work where the child is allowed to invoke any parent function.

In order to keep things abstract and extensible, Linux Kernel uses Structure Composition at several places. One of the most important places where it uses composition is for managing and maintaining Linked Lists, exactly how we saw things above. The struct definitions and code snippets are taken as-is from the Kernel's source code, and hence the structure and variable names look different than usual.

Python, one of the most important languages in today's world, uses Structure Composition to build Type Hierarchy. Python defines a root structure called PyObject which holds reference count, defining the number of places from which the object is referenced - and object type - determining the type of the object i.e. int, str, list, dict, etc.

Since Python wants these fields to be present in every single object that is created during runtime, it uses structure composition to ensure that objects like integers, floats, string, etc put PyObject as their first element and thus establishing a parent-child relationship. A Float object in Python is defined as

If you liked what you read, consider subscribing to my weekly newsletter at arpitbhayani.me/newsletter were, once a week, I write an essay about programming languages internals, or a deep dive on some super-clever algorithm, or just a few tips on building highly scalable distributed systems.

What are the internal workings of terminal commands?

Understanding for loop in Python