The strength of an encryption algorithm is determined by how hard it would be to extract the original message without knowing the encryption key. Usually, this depends on the number of bits in the key - bigger the key, the longer it takes to decrypt the enciphered data.

In this essay, we will work with a very simple cipher (encryption algorithm) that uses an encryption key with a size of one byte, and try to decipher the ciphered text and retrieve the original message without knowing the encryption key. The problem statement, defined above, is based on Cryptopals Set 1 Challenge 3.

The Single-byte XOR cipher algorithm works with an encryption key of size 1 byte - which means the encryption key could be one of the possible 256 values of a byte. Now we take a detailed look at how the encryption and decryption processes look like for this cipher.

As an example, we can try to encrypt the plain text - abcd - with encryption key 69 and as per the algorithm, we perform XOR bytewise on the given plain text. For character a, the byte i.e. ASCII value is 97 which when XORed with 69 results in 36 whose character equivalent is $, similarly for b the encrypted byte is ', for c it is & and for d it is !. Hence when abcd is encrypted using single-byte XOR cipher and encryption key 69, the resultant ciphertext i.e. the encrypted message is $'&!. 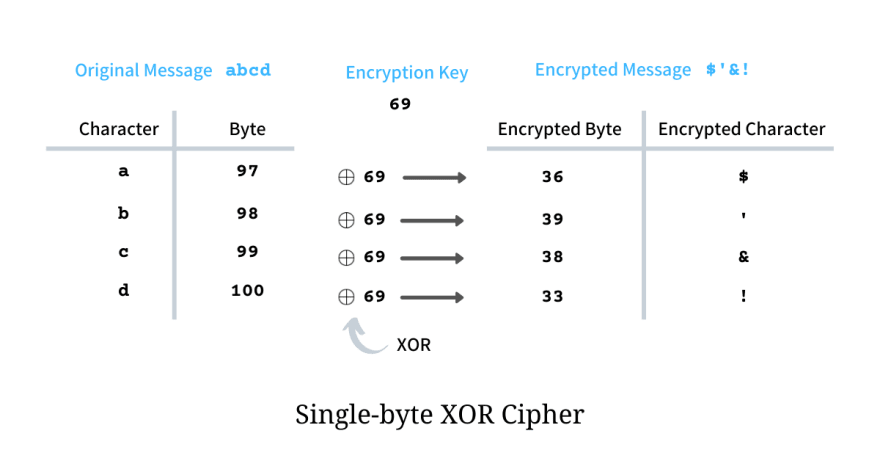 Since encryption and decryption both have an exact same implementation - we pass the ciphertext to the function single_byte_xor, defined above, to get the original message back.

Deciphering without the encryption key

Things become really interesting when we have to recover the original message given the ciphertext and having no knowledge of the encryption key; although we do know the encryption algorithm.

As a sample plain text, we take the last couple of messages, sent across on their German military radio network during World War II. These messages were intercepted and decrypted by the British troops. During wartime, the messages were encrypted using Enigma Machine and Alan Turing famously cracked the Enigma Code (similar to encryption key) that was used to encipher German messages. 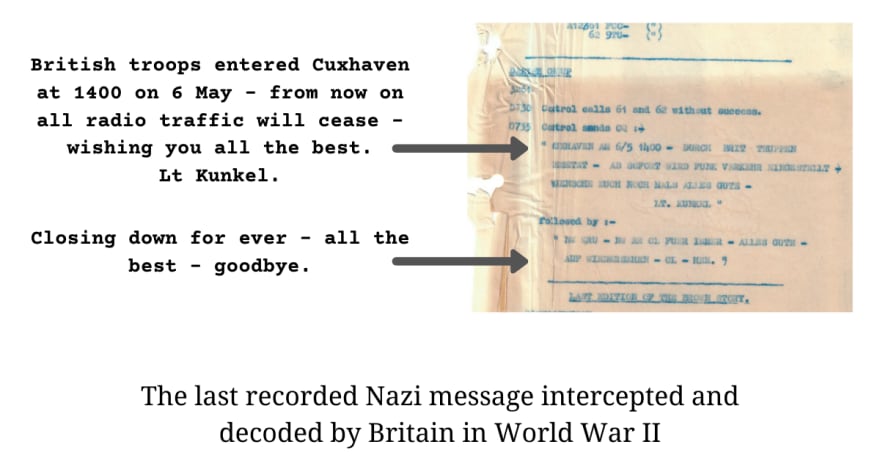 In this essay, instead of encrypting the message using the Enigma Code, we are going to use Single-byte XOR cipher and try to recover the original message back without any knowledge of the encryption key.

Here, we assume that the original message, to be encrypted, is a genuine English lowercased sentence. The ciphertext that we would try to decipher can be obtained as

There are a very limited number of possible encryption keys - 256 to be exact - we can, very conveniently, go for the Bruteforce approach and try to decrypt the ciphered text with every single one of it. So we start iterating over all keys in the range [0, 256) and decrypt the ciphertext and see which one resembles the original message the most. 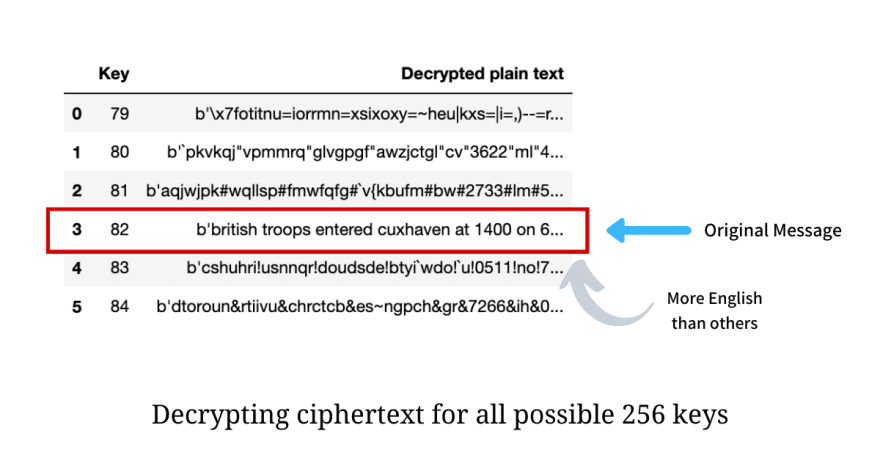 In the illustration above, we see that the message decrypted through key 82 is, in fact, our original message, while the other retrieved plain texts look scrambled and garbage. Doing this visually is very easy; we, as humans, are able to comprehend familiarity but how will a computer recognize this?

We can do this only because of our assumption - that the original plain text is a genuine English sentence.

Letter Frequency is the number of times letters of an alphabet appear on average in written language. In the English language the letter frequency of letter a is 8.239%, for b it is 1.505% which means out of 100 letters written in English, the letter a, on an average, will show up 8.239% of times while b shows up 1.505% of times. Letter frequency (in percentage) for other letters is as shown below.

The following chart shows Letter Frequency analysis for decrypted plain texts with encryption keys from 79 to 84. 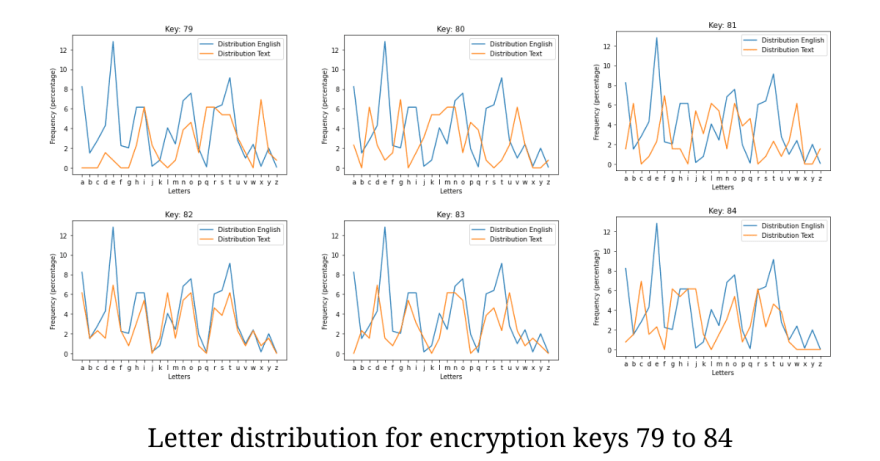 In the illustration above, we could clearly see how well the Letter Frequency distribution for encryption key 82 fits the distribution of the English language. Now that our hypothesis holds true, we need a way to quantify this measure and we call if the Fitting Quotient. 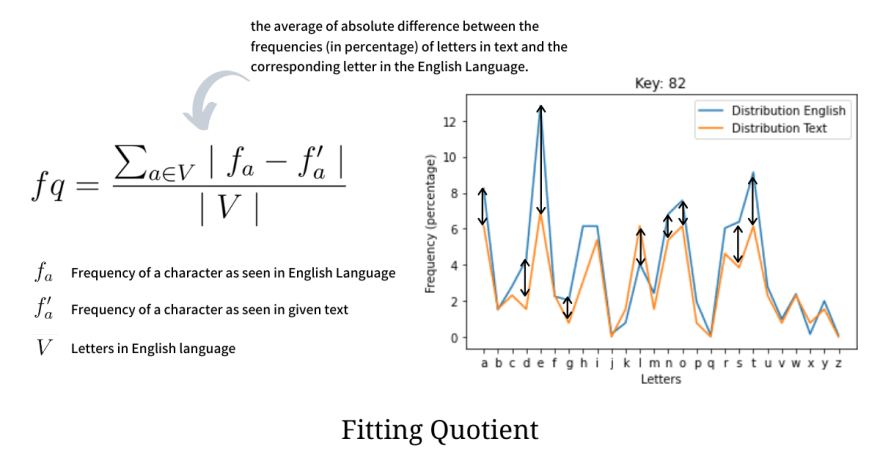 Python-based implementation of the, above defined, Fitting Quotient is as shown below. The function first computes the relative frequency for each letter in text and then takes an average of the absolute difference between the two distributions.

Now that we have everything we require to directly get the plain text out of the given ciphertext we wrap it in a function that iterates over all possible encryption keys in the range [0, 256), decrypts the ciphertext, computes the fitting quotient for the plain text and returns the one that minimizes the quotient as the original message. Python-based implementation of this deciphering logic is as illustrated below.

This approach was also tested against 100 random English sentences with random Encryption keys and it was found that this deciphering technique fared well for all the samples. The approach would fail if the sentence is very short or contains a lot of symbols. The source code for this entire deciphering process is available in a Jupyter notebook at arpitbhayani.me/decipher-single-byte-xor.

If you liked what you read, consider subscribing to my weekly newsletter at arpitbhayani.me/newsletter where, once a week, I write an essay about programming languages internals, or a deep dive on some super-clever algorithm, or just a few tips on building highly scalable distributed systems.