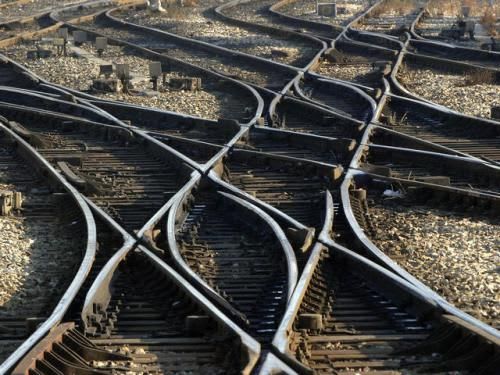 Promise as a concept dates back to at latest 1976 when the term was proposed by Daniel P. Friedman and David Wise. The idea started catching on in the javascript community in the late 2000s.

In July of this year (2020), Sam Saccone published a remarkable article outlining in detail the history of javascript's Promise. It's a fun read, I consider it definitive and I recommend it. I will summarize it here.

Before Promise, there was XMLHttpRequest, which used continuation passing style (we'll explain this later). Then, there was MochiKit in 2005, the first implementation of Promise in javascript. This was followed by Dojo's deferredRequest in 2006 (Dojo was the predecessor to jQuery), which was decoupled into Deferred in 2007, followed by Promise in Waterken Q in 2009, which that same year became Q, which influenced Dojo to adopt Promise, followed by jQuery's deferred in 2010.

If that all sounds like a mess, that's because it was. There was no clear way forward - new implementations kept being released and no one knew which one would win out and become standard. Then, in 2010, many important foundational asynchronous web apis began shipping (Webcrypto, fetch, IndexedDB, localStorage). This raised the stakes on what was already a serious vhs/beta situation.

A year earlier, in 2009, Kris Zyp proposed a unified interface that would cover most of these implementations and allow them to inter-operate. This would later became known as the 'Promises/A' spec. Paul Chavard wrote a test suite for it in the Ember.js library, though it was flawed - it didn't correctly describe the 'Promises/A' spec. Domenic Denicola fixed it up and thereby created the 'Promises/A+' spec, which he described in his talk Boom, Promises/A+ Was Born.

The meta win here was the fact that having multiple agreeing implementations showed the TC39 that there was community consensus around the idea of Promises… an idea that a few years earlier was thought to be too esoteric for common use.

Because of this, Promise is now supported natively by 96% of browsers worldwide. 'Promises/A+' eventually would unify over 70 promise implementations, massively reducing complexity and confusion.

Though the A+ spec had to make serious compromises that we'll discuss later, I think it's worth mentioning the tremendous accomplishment that the compromises allowed: a unified Promise spec that saved us all from having to learn several different standards, and maybe saved the very idea of a javascript Promise.

Before promises, asynchronous operations had to be done using callbacks. Here's an example stolen from Arfat Salman

The above code uses something called continuation passing style, although it's more often alarmingly referred to as 'callback hell'. According to Colin Toh

Callback Hell, also known as Pyramid of Doom, is an anti-pattern ... It consists of multiple nested callbacks which makes code hard to read and debug.

This control flow is improved. The power here is in modelling a callback as a value called a Promise.

then allows operations to run in sequence. This is a necessary trait for monads, which are also known as 'programmable semicolons'.

Monads are sometimes controversially1 described as containers or wrappers (burritos). Promise fits this metaphor nicely - a Promise 'wraps' a value in a 'container' that the value can never come out of - it exists in that container forever, only able to be changed from within (unless you are cheating with async/await - more on that later). In the burrito metaphor, the Promise is the tortilla and the value is the beans and cheese2.

Promise is not in fact a monad, but it's similar enough to be worth mentioning. We'll get to the differences later, but if you already understand monads, maybe now you understand Promise a little better, and vice-versa.

Here is an example of error handling using async/await syntax

Here's an example from Jake Archibald's JavaScript Promises: an Introduction 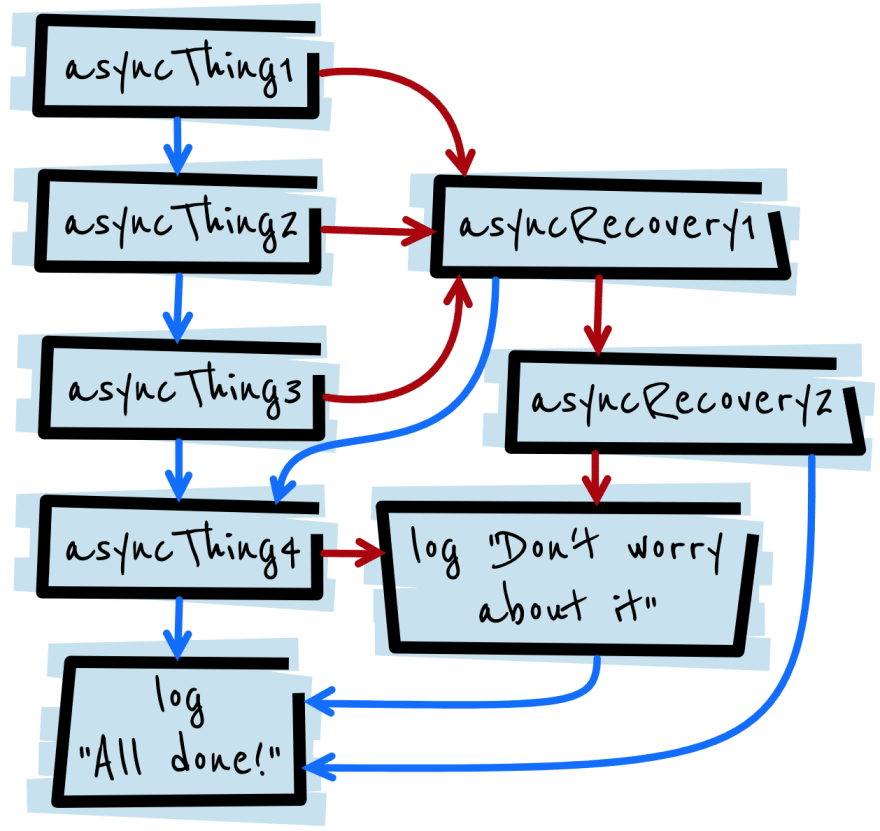 You can imagine that it would be much more complicated to implement this using async/await. Simple promises have more powerful error handling than async/await syntax3.

Promise also allows for expression-oriented programming, which encourages purity and is easier to reason about than statement-oriented async/await.

Promise is able to easily handle this kind of complicated control flow because with one value it models either a rejection or a resolution. This allows combinators like catch to handle values implicitly passed down from earlier operations. Take this example:

That picture is from Scott Wlaschin's influential Railway oriented programming. You can see two separate 'tracks' - a 'resolution' track above, and a 'rejection' track underneath. In the parlance of railfans, we say that catch can 'shunt' our rejection cases back onto the resolution track, while then can shunt them right back onto the rejection track.

TaskEither takes railway oriented programming to the next level with an abundance of operators. They're more specific than then and catch and cover much more potential functionality.

(This is an adaptation of a railway diagram from Aldwin Vlasblom's article on his Fluture library, which is similar to fp-ts. We'll explore Fluture more in the next article)

Errors propogated by Promise are typed as any, which is not good

It's also legal to completely omit a catch operation

This is because Promise models unchecked exceptions, which we covered in our last article, Either vs Exception Handling. The modern solution to this is the Either type, which of course is part of TaskEither

You can see right in the type signature of resource that it may return a ResourceError. We know at compile-time exactly which errors are possible, and we can't invoke a Task without handling both of it's Either cases (or at leas we shouldn't).

Then and catch are vague

then and catch are poorly defined functions. They have many different usages that look similar but behave differently. Here, I've noted the equivalent operations for TaskEither, which are more descriptive.

Also note that the type of handleAllErrorsTE and handleErrorAndValueTE is Task<number>, while the rest are TaskEither - this is more informative than the Promise<number> type that all of the Promise values share.

Non obvious difference btwn catch and then

then can accept an error handling callback.

These examples are functionally the same. So what's the difference between using the second parameter of then and catch?

Here's an example where the behavior is different:

The difference arises because both callbacks for then can optionally be asynchronous. This means that the catch from example3 can handle rejections from it's then operation, while the error callback in example4 doesn't get the chance to handle the error thrown by it's success callback. 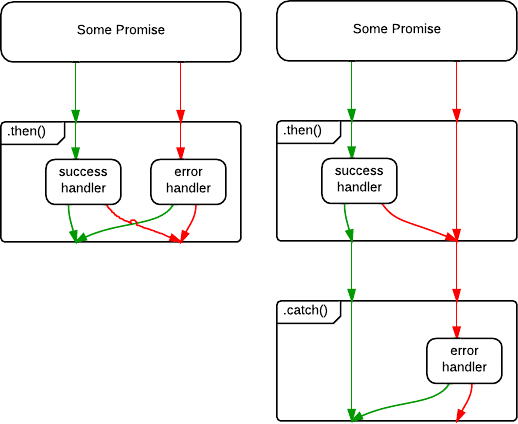 At the time of drafting the Promises/A+ specification, there were already several existing and popular Promise libraries, and it was important for different implementations to inter-operate. Because of this, it was decided that when users return an object with a then-function into their Promise, it should be assimilated as if it's a Promise.

...Automatic assimilation has some drawbacks though:
Firstly, the fact that the mere existence of a then function on an object will make Promises change behaviour, exposes users to the potential danger of accidentally supplying something that looks too much like a Promise, and causing the program to misbehave. Execute the following for an example of Promises misbehaving:

It is also possible, though extremely difficult, to conform to PromiseLike accidentally, as I discovered writing this example code.

There is duplicate code here. What if we factor it out?

Promise has cached the result of print (which was void), and will therefore not run it again.

We can do with Task.

(Example adapted from this SO post about Scala's Future)

Promise is therefore less referrentially transparent than Task is - although they both execute code that could affect the outside world, so neither of them can ever be fully transparent4.

This is an extension of the same idea we discussed in the first section - although Promise mererly represents a callback pattern as a value, Task (due to its laziness) represents an entire asynchronous execution as a value.

However, Promise.resolve flattens & invokes any Promise passed into it, which breaks the left identity.

It's a type error - it won't even run. But even if we finagle the value to compile, it still has unexpected behavior:

This happens because Promise.resolve invokes the Promise returned by printLine and forces it to resolve before moving on to printFirstThen.

Hopefully this example shows that this is strange behavior that can lead to unexpected results.

Here's how Task is able to pass the left identity:

This is an example of the practical engineering benefit of the monad laws: the broken left identity tangibly makes Promise less consistent & predictable than the behavior of Task.

There are times where we might want to nest Promise. For example, let's say we have the following two functions.

This function composing the two would be nice:

This type is quite exquisite. It explicitly shows that there are two different threads of execution involved here - three if you include the present thread of execution - and we have access to either one. In fact, we have access to the response thread from within the userInput thread, which is something we lack if Promises are pre-flattened.

Again, although the type signature is legal, this function is impossible to implement due to the strange auto-flattening nature of promises.

Even if it could exist, a nested Promise would pose a problem. Since the creation of a Promise immediately invokes its execution, it's difficult to predict how a nested Promise would behave. The inner Promise could execute before the outer Promise, or vice versa - there's no way to know without looking at the implementation details.

Eager evaluation does not preclude nestability - Scala's Future unfortunately has both. It has the behavior described above, which is unnessecarily complicated and not very referentially transparent.

Promise is powerful. It has made javascript into a first class language for asynchronous programming. I hope Domenic Denicola's legacy is his tremendous 'Promises/A+' spec, and not his infamous github comment criticising typed functional programming (the javascript fp library 'fantasy-land' was named after it).

Though I disagree with his statement, I understand where he was coming from. He was carrying the weight of dozens of proposals and the future of asynchronous programming - as javascript becomes more popular outside of the web (nodejs, react native, electron, ink, etc), it becomes clearer that the success of 'Promises/A+' had staggering implications. He must have felt that one wrong move could bring it all toppling down.

Not to give all the credit to Denicola - the idea is 45 years old, and it took many people many ideas and iterations to get to the point of 'Promises/A+'. I just would have felt wrong writing an article about Promise from a functional perspective without mentioning that github thread. If not for the aggressive and cyclical nature of the debate (on both sides), would recommend reading it - it's entirely about the practicality of functional programming & category theory. There's also a similar thread about Promise.resolve here - read at your own peril.

Needless to say, as great as Promise is, TaskEither is even better. It resolves many the pitfalls outlined above, and adds a ton of functionality. With its laziness, referential transparency, type-safety, and advanced yet simple control flow, TaskEither is the culmination of the best asynchronous programming techniques available.

What is Feature Engineering?